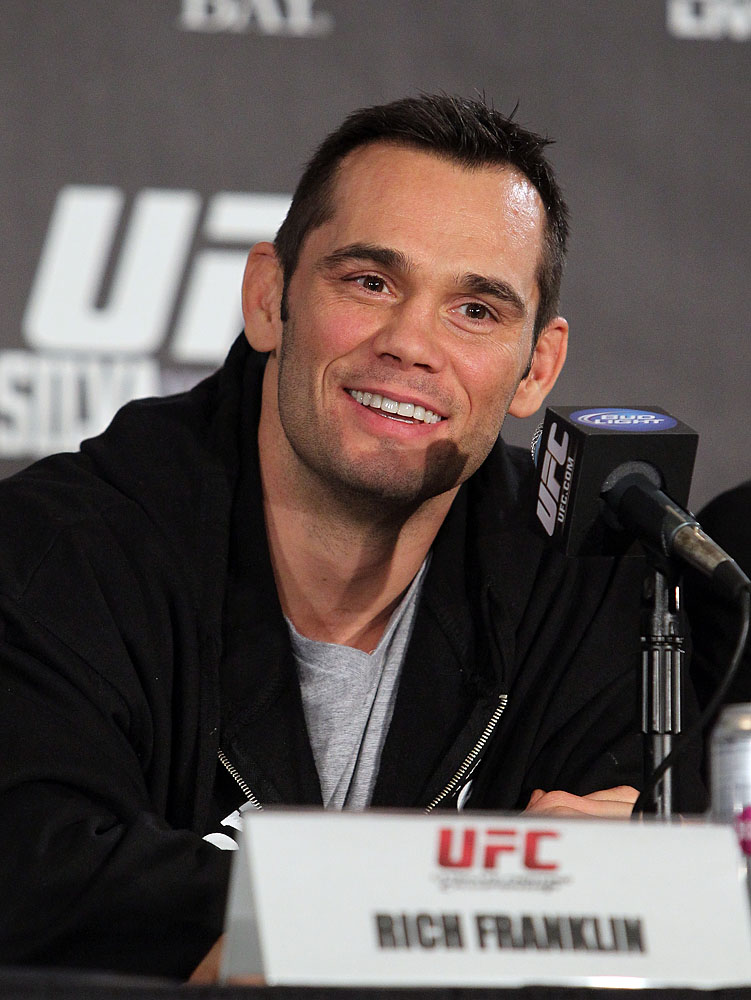 Rich Franklin was always the most unlikely of UFC champions. Perhaps that’s what made “Ace” – who retired on Monday at the age of 40 – such a key part of the promotion’s rise at a pivotal time in its history.

A former high school teacher with a bachelor’s degree in mathematics and master’s degree in education, Franklin emerged on the world MMA scene in 2005 as one-half of a nationally televised main event against Ken Shamrock.

The Cincinnati native was nearly six years into his mixed martial arts career (which included three UFC bouts) as he stepped into the Octagon in Las Vegas on April 9, but he had just started fighting full-time as 2005 dawned. He defeated Shamrock in the first round that night, but it was what happened in the fight prior to his that changed his life forever.

That night, Forrest Griffin and Stephan Bonnar put on a war for the ages in the Ultimate Fighter season one light heavyweight final, and it was the start of the MMA explosion in the United States. And who better to promote this misunderstood sport than Rich Franklin, the one guy the UFC could turn to when critics called the sport brutal, and its athletes Neanderthals?

It’s hard to believe now that in 2005 that was how MMA was perceived, but it was. And it was fighters like Franklin who not only had his resume backing him up, but a willingness to take the time to address the bizarre questions and explain the sport in a way that educated people about his passion.

“I’m a people person,” he said. “My degree was in education, and I taught high school, so I obviously believe that I speak well and interact well with other people, and on top of that, I think I just naturally had a knack for interviewing.”

It was a knack that traveled well, as he didn’t just serve that role as ambassador in the United States, but around the world, as he competed in Northern Ireland, Canada, Ireland, Germany, Brazil and China as a member of the UFC roster. And wherever he went – and still to this day – he remains a fan favorite.

Franklin tells the story of an incident when he and his brother were in college and serving as valets at a five-star restaurant in downtown Cincinnati. A notable pro athlete was standing at the corner near the eatery and Franklin and his brother approached him for an autograph, only to be treated rudely.

“We walked away from that with a very bad experience, and at that point I had no thought of ever being anybody with any kind of notoriety, especially globally, but I remember saying to him ‘if I ever got famous, I would never be rude to a fan,’” he said. “So I’m not. And the personality that somebody gets when they meet me is pretty much who I am in person. I’m not saying I don’t have bad days, but if I have a day where I don’t feel like signing autographs, that’s just a good day for me to stay in my house.

“So if you’ve ever watched me interact with my fans in an autograph line, the people running the event are always leaning down and in my ear like ‘hey Rich, we’ve got to get to all these people,’” he continues. “And I want everybody to come through that line to know that their experience with me is unique. I would want them to feel like they were the only fan that showed up that day for my appearance. I’ve always been that way. If you’re not going to do something right, then don’t do it at all.”

His interactions with fans and the media and his duties as unofficial UFC ambassador are key parts of the legacy Franklin leaves behind. But they should stand on level ground with what he did in the Octagon, where he compiled a 14-6 record while fighting a Murderers Row at 185 and 205 pounds. That list included UFC Hall of Famers Shamrock, Chuck Liddell and Forrest Griffin, as well as former UFC or PRIDE champions Wanderlei Silva, Vitor Belfort, Dan Henderson, Anderson Silva and Evan Tanner. Add in Lyoto Machida, who Franklin fought in a non-UFC bout in Japan in 2003, and that’s 11 fights against eight former champions.

Franklin wasn’t just the man the UFC called on for SuperFights though, as his fourth-round TKO of Evan Tanner in their rematch at UFC 53 in June of 2005 put him in elite company as a UFC world champion. Franklin successfully defended that middleweight belt twice, knocking out Nate Quarry and decisioning David Loiseau in 2005-06. The Quarry win was notable for being a one-punch highlight reel knockout and the Loiseau victory showed off Franklin’s warrior spirit as he went five rounds after suffering a host of injuries during the bout. That ability to end a fight wherever it went or dig down deep and go the distance was a hallmark of Franklin’s versatile fight style, but if he had his way, it was going to be a stand-up fight, and three of his last five victories ended by knockout.

In October of 2006, Franklin lost his title to Anderson Silva, who began his nearly seven-year title reign at the expense of “Ace.” Two subsequent wins earned Franklin a rematch with the Brazilian, but after a second defeat, Franklin’s M.O. was his willingness to engage in SuperFights with fellow superstars like Henderson, Wanderlei Silva, Belfort, Liddell and Griffin.

In November of 2012, Franklin was stopped by Cung Le in Macao, and while he hinted at fulfilling the final fight in his contract, Monday, a week before his 41st birthday, he decided that he had made that walk to the Octagon for the last time.

“The overriding statement that I’ve had since my last fight was that my intention is to finish out my contract,” Franklin said. “And as time has gone on and I’ve been working with One Championship over in Asia, I’ve been busy doing the things that I do for them, and I have my own stuff going on as a quote-unquote celebrity, so to speak. (Laughs) So it’s just that I’m very busy. And I wrote in my article that I can tell that I’ve slowed down, and it almost seems negligible, but it doesn’t take much to actually make the difference between winning and losing in the upper echelon. I’m at a point now where I’ve got my share of bumps and bruises, but I’m in good shape, I’ve taken care of myself and I look back on my career and a big part of the motivation really for finishing out my contract at this point would just be financial gain. And I always told myself that I would never fight for a financial motivation, that I would want myself to make sure that I had other solid reasons for taking the fight. So you get to the point where you look back and you’re like ‘I’m not gonna make a run for the title again.’ It’s too late, so I’m going to go out on my own terms rather than the sport kicking me out.

But don’t expect Franklin to be sitting on the beach into his twilight years, as he is still in the gym daily, still fulfilling his role as Vice President for MMA promotion One FC in Asia, and also working on several other business interests. And yeah, he still gets that itch.

“Every day,” he laughs. “I definitely have enough gas in the tank for sure, but there are a lot of things that go into this. And I still train every day. I got up this morning, checked a couple messages, did a little email, and then I went to the gym and trained. I’ll probably do some cardio tonight. I’ll get up tomorrow and either do some grappling drills or some pad work and sparring. It’s still my life, so every day I’m still going into the gym. I said this to somebody the other day, I feel like I was in retirement and I came out of retirement because now that I’m not fighting, I’ve been working for One Championship full-time, I have other things that I have going on in my personal life, like working with a brand like Armor Gel and stuff like that, and for the first time in my life, I have a job that I have to do, plus I’m still trying to maintain the rigorous schedule that I did during my career. Now I feel like I have two jobs.”

But what about that “unlikeliest UFC champion” title? Would that be accurate in describing Rich Franklin?

“I wouldn’t disagree with that,” he said. “I think if you were to have shown that to my high school football coach or half the people I went to high school with and they would say ‘what a perfect title.’ I didn’t even start for my high school football team. Yeah, I’ve been an athlete my whole life, but as a young kid, I was a big kid and strong, and I basically grew vertically a little bit, behind the curve of everybody else. But I didn’t grow horizontally. (Laughs) I was very skinny graduating high school and I hit a late growth spurt in college, but to see somebody basically be a third-string high school football player or a third-string in any sport to all of a sudden become a world champion is very unlikely. You get my approval on it.”

It was a story everyone could latch on to before fights, and once Franklin stepped into the Octagon, he kept everyone’s attention with his performances. It was a rare mix, and he will be missed on fight night, even though it’s good to see him leave on his own terms. So what will “Ace” miss about being an active fighter?

“It’s not the glory,” he said. “That’s not what did it for me. What did it for me is the fact that when I was getting ready for a fight, the entire gym rallied behind me. And it wasn’t just the gym, but my friends, my family, and even the community. It was like the troops uniting behind a general going into battle. And that’s what you felt like. It’s not like a self-centered egotistical thing, like ‘well, life’s all about me.’ It’s a feeling of camaraderie, and I think that’s what I’ll miss the most about this sport.”

The UFC's Toughest Fights On