Mike Straka checks in with former lightweight champ Frankie Edgar to find out about the move to featherweight... 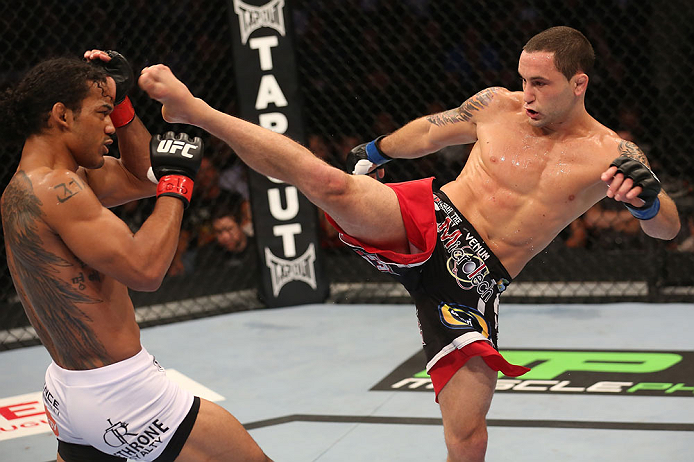 The UFC featherweight division is known for its fast-paced, high-skilled bouts and the well-rounded skills of its participants, and now a high-profile, former 155-pound kingpin is heading to their ranks, immediately adding even more depth to the weight class.

Frankie Edgar (14-3-1), who has long heard the call from the UFC brass and many fans to drop a weight class, has decided cutting weight for the first time in his eight year professional fight career isn’t so bad after all.

“The fight at UFC 150 didn’t go my way,” said Edgar. “I’m not saying I’ll never fight 155 ever again but this is something different. (UFC president) Dana (White) wants me to go down and right now it’s the right time to do it.”

But Edgar got a little more incentive to drop to 145 after featherweight champion Jose Aldo told Tatame.com that he’d like to close the book on all the Edgar talk at his weight class.

“He said he wants to drop to featherweight so I’m hoping he does that to end this story,” Aldo said. “He’s welcome here so that we can shut him off and he goes to the lightweight or bantamweight classes.”

Edgar responded to those statements by immediately making up his mind to go to 145.

“That definitely helped me make my decision,” he said. “I’m a competitive person and when someone talks like that it makes me want to get in there and see what ‘45 is all about.”

Edgar dropped a controversial split decision to lightweight champ Benson Henderson in their rematch at UFC 150 earlier this month in Denver’s Pepsi Center. At the post fight press conference I asked Dana White if Frankie were to move down to 145, would he get an immediate shot at the title?

“I think Frankie would have to fight somebody at 145 (before getting a title shot),” White said. “We’ve got all these backed up titles right now…and if I know Frankie, he’s going to want to get in there right away.”

Edgar says he’d like to make an impressive debut in the division and take on someone who’s already established himself as a contender there.

“I think that’s kind of a given being where I’m at in my career, but ‘45 is a tough division, there are a lot of good guys down there. But I haven’t talked to Dana yet about who I might fight down there yet.”

Edgar had long shunned the notion of moving down to 145. When he first started fighting professionally, there was no 145-pound division in the UFC, and 155 was where Edgar made an impressive debut against Tyson Griffin - which earned him Fight Of The Night honors at UFC 67 in January of 2007 - despite being rejected for The Ultimate Fighter season five after he was thought to be too small for the division.

“Dana said ‘You’re a little small for ‘55 and I told him I once fought at 170,” said Edgar. “Either way they still called me and offered me Griffin, so whatever.”

A succession of tougher and tougher opponents presented the opportunity for the smaller fighter from Toms River, NJ to prove he belonged, and he did it in impressive fashion, dispatching the likes of Spencer Fisher, Mark Bocek, Hermes Franca, Sean Sherk and Matt Veach -- dropping just one match along the way to Gray Maynard -- before earning a shot at the title against BJ Penn at UFC 112 in Abu Dhabi.

Edgar shocked the world by taking a unanimous decision, and then did it again in an immediate rematch at UFC 118. A rematch with Gray Maynard ended in an exciting draw in January 2011 and Edgar won their third match with a fourth round knockout, becoming the first person to ever finish the tough Maynard at UFC 136.

Edgar then lost his belt at UFC 144 in Japan’s Saitama Super Arena to Henderson, and after losing the rematch earlier this month in a razor close split decision, he decided now is the right time to go down to 145.

“I told myself I wouldn’t make a decision until after the fight,” he said. “I wanted to give myself a week to figure it out. I don’t know if I would have felt differently if I did win the title back. You always have to give yourself some time because right after a fight emotions are always running high, win or lose.

White said Edgar would be a “monster” at 145, but Frankie is quick to point out that even at featherweight he’s still a small guy.

“For real I don’t think I will be the bigger guy,” he said. “I think these guys at ‘45 cut more weight than I will. I may not be dwarfed in size like some of the guys I’ve fought at lightweight but these ‘45 pounders present different challenges. By no means do I think that by going down to a different weight class I’m going to be successful right away. I think I’m still going to have solid opponents to fight.”

Aldo is scheduled to fight Eric Koch at UFC 153 in Rio in October. Should Edgar win in impressive fashion in his featherweight debut, he could very well see a chance at another belt sooner than later, especially if he wins against a name opponent like Chad Mendes.

Should Edgar be successful at another title run, he would be only the third fighter in UFC history to win belts in two different divisions, with legends BJ Penn and Randy Couture being the other two. As far as concessions go, that’s not bad company for Edgar to keep.

“That would be phenomenal,” he said. “That would be something you can look back on in later years and be proud of, but I can’t really look past this next fight. I don’t know what they envision about an immediate title shot or not. I know Dana said at the press conference that he wants to see me fight a guy first. I really don’t care, I just want to get back to my winning ways.”