Frankie Edgar's desire to be the best will be on display yet again when he faces Cory Sandhagen at UFC Fight Night: Overeem vs Volkov
By Thomas Gerbasi, on Twitter: @TGerbasi • Feb. 2, 2021

New Year’s Day, 2011. It was the night Frankie Edgar’s legend was born.

The pride of Toms River, New Jersey, was already established as one of the UFC’s best at the time, and he had the world lightweight title and a pair of wins over BJ Penn to prove it, but it wasn’t until he roared back from a near knockout loss in the opening round of his rematch with Gray Maynard to secure a draw verdict and retain his title that the whole world got on the bandwagon of “The Answer”.

“I can remember it like it was yesterday,” said Edgar. “Sometimes you look back and tell stories and talk about opponents, and yeah, you're like, 'Wow, that was a while ago.' But a lot of those memories are still so fresh in my mind.”

RELATED: The Making Of Frankie Edgar

And that fighting spirit hasn’t dulled, not through the ups and downs, or through moves from 155 pounds all the way down to 135 pounds, where he is currently ranked fourth in the world heading into his Saturday bout against No. 2-ranked Cory Sandhagen. That’s an improbable journey for anyone to make and still be on top, but if anyone needed any proof, Edgar’s win over Pedro Munhoz in his bantamweight debut last summer was there for everyone to see.

“It was great,” he said of his five-round decision win. “My conditioning was on point, my speed was on point, I listened to my coaches, combinations were flowing. The leg kicks didn't feel very good (Laughs), but other than that, I felt pretty good.”

That first of eight Fight of the Night awards for the 39-year-old was against Tyson Griffin on a star-studded UFC 67 card where the lightweights stole the show from the likes of Anderson Silva, Lyoto Machida, Quinton “Rampage” Jackson and Mirko Cro Cop. And just like the Munhoz fight, Edgar’s leg had to take a little abuse before the final bell sounded.

“You gotta take your lumps,” he laughed. “That's what makes it entertaining.”

Edgar has always delivered on that note, and he’s always been Mr. Reliable when it comes to working harder than anyone in the room back home in Jersey. That’s rare, especially as a fighter gets older, but he hasn’t altered his approach to training in the slightest. 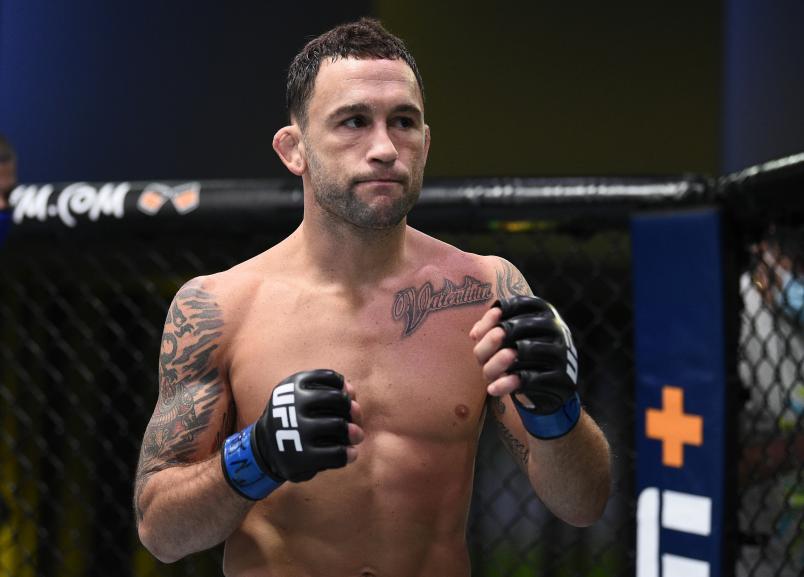 Frankie Edgar prepares to fight Pedro Munhoz of Brazil in their bantamweight fight during the UFC Fight Night event at UFC APEX on August 22, 2020 in Las Vegas, Nevada. (Photo by Chris Unger/Zuffa LLC)

“It's still the same,” he said. “I do think I'm a little more sore throughout the week, but I feel like if I can't train like I used to, then maybe I shouldn't be training. So I'm gonna keep pushing that pedal to the floor and the body's just gonna have to keep up. It has no choice.”

That attitude can make the affable and down-to-Earth Edgar one of the most intimidating figures to see across from you on fight night. How do you beat someone who refuses to be beaten? You can catch him with a punch or a submission, but you won’t take his heart, and that’s an example he has always been intent on setting for his three kids.

“Perseverance is one of the biggest attributes anybody can have in any avenue of life and just the fact that I'm not one to go through the motions and I'm still trying to be the best tells my kids to always strive to be the best,” Edgar said. “It's not always about obtaining that goal. My kid wrestles and I tell him it's not about winning everything; it's about training to win, wanting to win and the effort to win. That's the most important thing. So I'm always going to put in a hundred percent effort, a world championship effort, whether it's the title or not. I'm not even worrying about opponents anymore. I'm competing with myself and that makes it so much better. I don't care who it is; it's just a face. Tall, small, big name, nobody, I'm competing against me and that's what I'm gonna continue to do.” 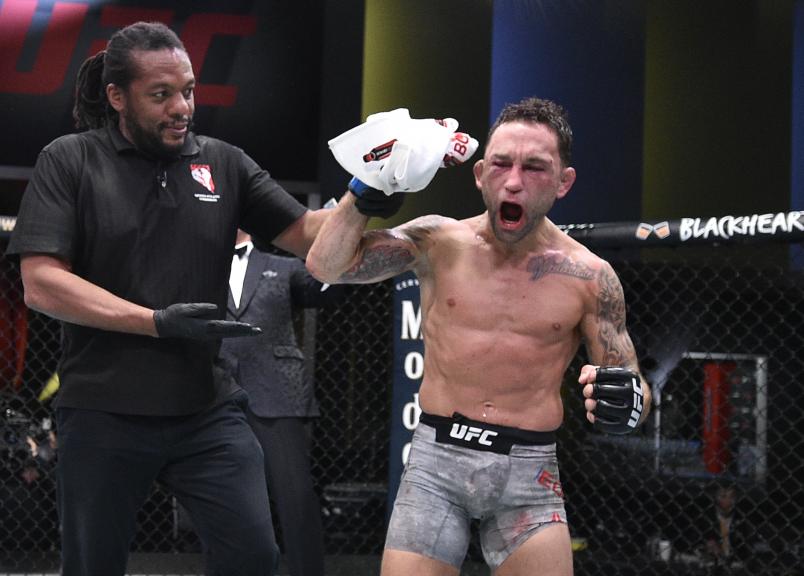 Frankie Edgar reacts after his split-decision victory over Pedro Munhoz of Brazil in their bantamweight fight during the UFC Fight Night event at UFC APEX on August 22, 2020 in Las Vegas, Nevada. (Photo by Chris Unger/Zuffa LLC)

But hey, you beat the No. 2 contender in the division with the No. 1 contender (Aljamain Sterling) getting his crack at the belt soon, could champion Petr Yan be in Edgar’s future, or at least on his radar?

“I don't want to make the title the only reason I'm doing this,” he said. “That kind of takes away from the person and the fighter I am. But I think that has to be in the back of my mind always. I always want to strive to be the best and I'm always fighting the best guys and that's what's gonna happen. This fight could easily be a number one contender fight and whether I want to or not, I'm knocking on the door of a title again.”

Wouldn’t that be a story? Frankie Edgar, more than 10 years after his epic rematch with Maynard, turns 40 in October and celebrates by winning another world title. That’s a Hollywood ending, but Edgar has never been a Hollywood guy. He’s a blue collar battler from the Garden State who just wants to fight. So line ‘em up, and enough of that 40 talk.

“We're not trying to count the clock too much,” he laughs. “But I want to get these fights in and time's ticking, so let's bang 'em out.”