Frankie Edgar Is As Motivated As Ever To Make His Push To The Top Of The UFC Bantamweight Division. UFC 268 Is His Next Step:
By Thomas Gerbasi, on Twitter @TGerbasi • Nov. 4, 2021

Not surprisingly, Frankie Edgar didn’t stop the world on October 16 to stress out and evaluate his life as he turned 40.

Maybe that’s the secret to Edgar’s success as one of the best fighters of this era, a former lightweight champion, as well as a featherweight and bantamweight contender who is still chasing gold and history at 135 pounds. The way he approaches life in his sport, he doesn’t see the purpose in altering everything just because another page turned on the calendar.

“I still have the same workload as I did when I was in my 20s and I'm keeping up with it fine, and if anything, better, because I know how to do it a little better and I don't get so stressed out and little things don't bother me as much,” he said. “So with that experience and wisdom, it makes training easier.”

Whoa, Frankie, your training sessions have achieved legendary status. Easy probably isn’t the word for them.

On Saturday, he makes his 29th walk to the UFC Octagon when he faces Marlon Vera on the main card of UFC 268 at Madison Square Garden. It’s pretty much a home game for Toms River, New Jersey’s finest, who has been adopted by fans in the Empire State, and around the world, So basically, every fight’s a home game for “The Answer,” but he does prefer being closer than usual. 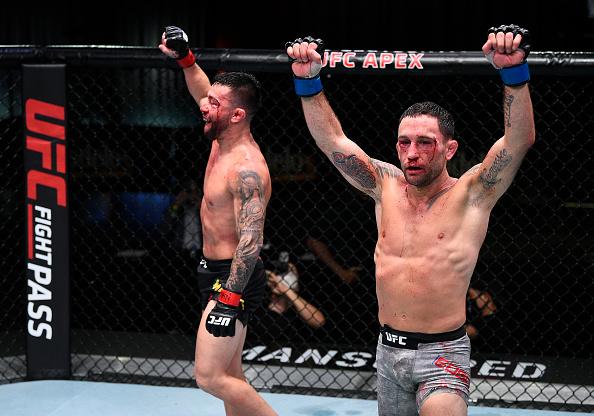 Frankie Edgar and Pedro Munhoz of Brazil react after the conclusion of their bantamweight fight during the UFC Fight Night event at UFC APEX on August 22, 2020 in Las Vegas, Nevada. (Photo by Chris Unger/Zuffa LLC)

“Absolutely,” Edgar said. “I've been going to New York and going to the Garden since I was a kid, so to be able to fight there for the second time, five years apart, it's definitely special, especially with everything that's going on. To be able to fight close to home is cool, and finally, with some fans. It just gives you that energy. I don't know of many fights where I didn't have the crowd cheering my name, so that's the plan - get the crowd behind me, get them screaming 'Frankie' over and over again, and I think we get this W.”

It’s an important fight for Edgar, who is coming off a first-round knockout loss to recent title challenger Cory Sandhagen in February. It was a crushing defeat, but also one where he got caught by a knee that would have finished anyone it landed on. Still, Edgar took some time (not a lot for the notorious gym rat) to enjoy being around his family and also make sure his kids got to their sports practices.

“I definitely took a little time to make sure I healed up, but I'm a gym guy,” he laughs. “I don't do too good at home. So I don't know if there was any chilling out, but my oldest son is playing football right now, I have my middle guy wrestling every weekend, and my daughter's doing gymnastics, so I was carting them around and helping my wife with those things, and just being a dad.”

Family is number one on Edgar’s priority list, but when he got back to the gym, he was all-in once more, preparing for yet another rising star who knows that beating Frankie Edgar is a career-altering accomplishment.

“It's a good burden,” he said of always having a target on his back. “It's motivating. And I put all that pressure on myself. Every fight, I'm the one that's trying to outdo myself so these guys can't get me.”

The thing is, though, as good and as respected as Vera is, if Edgar beats him, that doesn’t necessarily change the trajectory of his career like if it would Vera’s if the roles were reversed. Edgar doesn’t agree.

“In our sport, you're only as good as your last fight and my last fight didn't go so good, so I need to rebound. For me, in my mind, it's just as important as it is in Marlon Vera's mind.”

“For my mental health, it's very important.”

“The competitor I am, I have to look at it as it's do or die,” he elaborates. “The crowd is fickle, and if you don't go out and perform, people forget about you. For me, my life's on the line.”

Edgar’s legacy in this sport is set. Not just as a fighter and a former world champion, but as one of the best ambassadors MMA has ever had. So him being forgotten based on the result of Saturday night’s fight is just not happening. But…it reminds me of something boxing legend Bernard Hopkins told me before his fight against Oscar De La Hoya in 2004.

Hopkins, already with Hall of Fame credentials, said that if he lost to De La Hoya, he was going to be fighting on basic cable next. Impossible, I said. But then he explained that feeling like that kept him hungry.

"I'd like to just remind everybody that we're still here to stay."@FrankieEdgar is confident that he is going to bounce back and get a big result at #UFC268 🔊⬆️

“Motivation can come in all shapes and forms with me,’ Hopkins said. “If I go outside and all my tires are slashed, that’s motivation. When things run smoothly, somebody has to break a glass; somebody has to do something. Some people need bumps in the road to make things happen.”

Are you that guy, Mr. Edgar?

“You need that fire under you, and that's just how I do it,” he said. “I put a lot of pressure on myself. Some people say that's bad, but to me, it's good. Pressure makes diamonds.”

I’ll call that a yes, and hey, with Hopkins winning title fights at 49, and Glover Teixeira taking the UFC light heavyweight title last weekend at 42, maybe it’s Edgar’s turn to show that 40 is the new 25.

“You don't see too many little guys at my age, but there's always gotta be a first guy, so I don't mind doing that,” he said. Then he paused.

“I love this,” Edgar continued. “I do. My spirit is not ready for any of this to be over with, so we're in it for a while.”