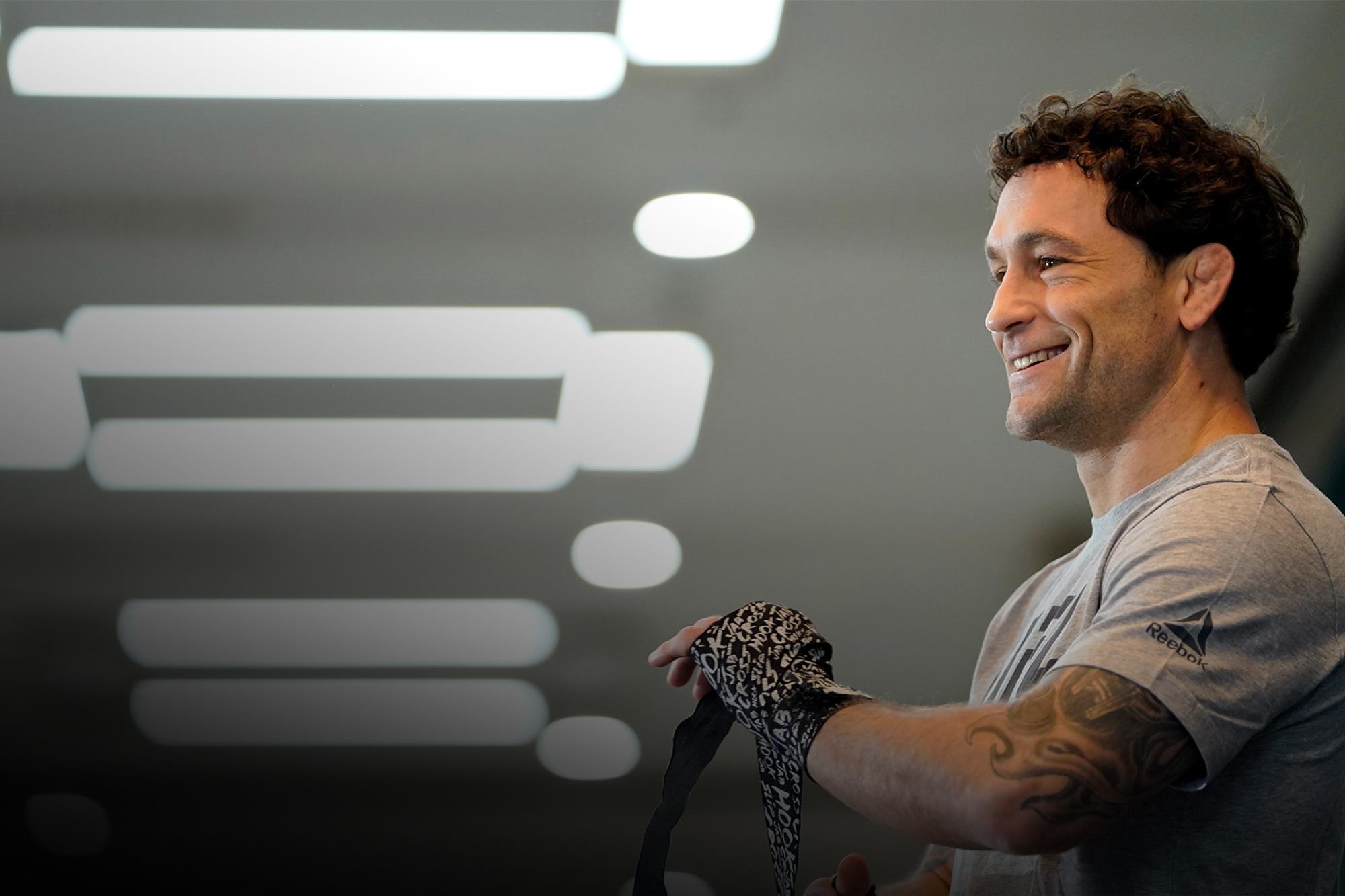 “I want to save that for when it’s all said and done. That’s when you look back and relish your accomplishments. Right now, I don’t want to sit on my laurels; I want to create some new ones.”
By Thomas Gerbasi, on Twitter: @TGerbasi • Dec. 19, 2019

Frankie, Frankie, Frankie. Some people never change, and Frankie Edgar is one of those people. That’s a good thing, especially if you’re a UFC fan, as the pride of Toms River, New Jersey can always be relied on to show up with gloves on and mouthpiece in, ready to fight.

No drama. No fuss.

So even though the former lightweight champion has a January 25 fight scheduled with Cory Sandhagen, when Brian Ortega was forced out of this weekend’s main event in Busan, guess who threw his name in the hat to fight Chan Sung Jung?

I remind Edgar that anyone who knows him is well aware that he might as well always be in training camp.

“Yeah, I’m always training, and when this opportunity came up, my body felt good. It doesn’t always happen that way. Sometimes there are fights I’m training for and my body doesn’t feel good, so I figured, why not? Everything’s lining up, let’s make it happen.”

And here I thought the father of three just wanted an extra check for Christmas.

“That definitely doesn’t hurt,” laughs Edgar, who did get the fight with “The Korean Zombie.” It’s a case of better late than never, as the two were set to fight in November of 2018 before Edgar was forced to withdraw due to injury, so getting a shot to face the Korean action hero was another factor in his decision.

“I probably would have fought anybody, but there is the fact that me and Zombie were close to fighting and I prepared for the guy,” Edgar said. “He’s a name, it’s in his home country and I kind of like the whole scenario.”

Of course, there is the question of the Sandhagen fight, which was going to mark Edgar’s debut at 135 pounds. That bout has not been canceled yet, with a decision likely to be made after this weekend’s event, but what if Edgar scores a big win at featherweight? Will he stay?

Oh, we can tell, all right. And as far as making a quick turnaround to face Sandhagen, it’s nothing he’s going to address until after he takes care of his Zombie business.

“I’ve got to take that out of my mind,” he said of the North Carolina bout. “I’m not closing the door on it, but mentally I need to focus on the 21st. I don’t want to be thinking about anything else besides that.”

“Absolutely,” he laughs. “It would be a great story, and something very cool to do in my career, but like I said, I really can’t focus on that. I gotta just worry about Korean Zombie right now. Fighting this guy in his home country is going to be a tall task to begin with.”

It is, especially with Jung riding the momentum from his 58-second knockout of Renato Moicano in June, but Edgar has never been an easy out, and with coach Mark Henry likely having a stack of notebooks with notes on the Zombie already from the first time they prepped for him, there will be no surprises for Team Edgar.

“Some things definitely apply from the first time, and he’s not that different,” said Edgar. “I do think he’s been looking great lately, but I’m even a little different from then. For the most part, we know what we want to do. It’s not like we have to look and really digest too much because we’ve done it already.”

Edgar has done a lot already in a career that began in 2005, much of it in the current decade that is being celebrated as 2020 approaches. But not surprisingly, the humble 38-year-old isn’t interested in recalling past glories while he’s still a relevant threat.

“People remind me, but I try not to dwell on it,” he said of his storied career. “I want to save that for when it’s all said and done. That’s when you look back and relish your accomplishments. Right now, I don’t want to sit on my laurels; I want to create some new ones.”