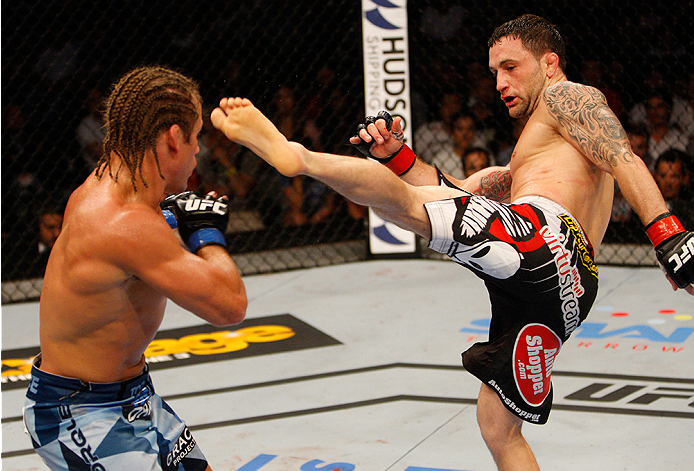 It’s only been seven months since the last time we saw Frankie Edgar in the Octagon, but it feels longer. But not as long as it feels for “The Answer.”

“I was wanting to get in there a lot sooner,” he said. “I was trying for September, and I even did a little mini-camp because I thought they were going to get me a fight at the end of September. But then it was maybe October or November, and here we are, fighting in December.”

Edgar’s return comes next week in Las Vegas, as he faces off with fellow featherweight contender Chad Mendes on December 11. If we’re nitpicking, it’s business as usual for the Toms River, New Jersey native, who hasn’t fought more than two times a year since 2007, but that’s not necessarily by choice.

“I don’t want a break. I want to get more active. It just feels like I’m knocking on the door and trying to pick the right fights and fight the right guys and it’s how it worked out for me,” he said, but the funny thing about the whole situation is that Edgar isn’t going on vacations and getting fat while waiting for his semiannual trips to fight.  He’s one of the most notorious gym rats in the game, a tireless worker who is unfamiliar with the idea of going at half speed.

“I think it’s the people I have around me,” he said. “My coaches are always eager to push me to the next level and I don’t just go to the gym to punch a clock. I’m there for a reason and by helping your teammates and getting them ready for fights, it helps me stay in the gym, and I’m definitely that guy. We don’t have the biggest team here, but we have guys that are selfless and always helping each other out. As soon as I’m done fighting, I’m helping my teammate get ready, and vice versa.”

So after Edgar picked up his fourth win in a row by defeating Urijah Faber in May, it was back to the gym while waiting to see how he fit in the featherweight title picture. He was ready to step in for the injured Jose Aldo against Conor McGregor in July, but that assignment went to Mendes, who, after losing his crack at the interim UFC featherweight crown, will now look to spoil Edgar’s plans for a title shot in 2016. It’s a high stakes battle any way you slice it, but even more than that, it’s a great stylistic matchup that is one of the best on a week stacked with crowd-pleasing matchups.

“He’s a tough fighter,” Edgar said of Mendes. “He’s obviously been at the top of the 145-pound division since he’s been in the UFC and I felt that we were going to cross paths eventually. If this isn’t a number one contender fight, I don’t know what is.”

The winner should be the man at the top of the rankings at 145 pounds, but a lot depends on what happens between Aldo and McGregor in the main event of UFC 194 on December 12. A close fight could call for an immediate rematch, and McGregor dethroning Aldo could produce a similar result. Those realities have tempered Edgar’s hopes for an immediate title fight with a win, but he is still hopeful.

“I’m a realist,” he said. “There’s no guarantee. I’ve got to make sure I put on the best performance that I can and kind of make it so they have no choice. But I thought I’ve done that in the past and I still didn’t get what I wanted. So I’m keeping my mind open, but hoping for the best.”

The prospects of Mendes getting in a title fight with a win may be even slimmer, considering that he’s lost twice to Aldo and once to McGregor. A Mendes victory could open the door for Max Holloway to make his way into that challenger’s position should he beat Jeremy Stephens on the same night as Aldo-McGregor, so needless to say, it’s a crazy situation that will only be clearer come December 13. But oddly enough, Edgar knows what Mendes is going through.

“I kind of feel like I’ve been there before,” he said. “I was so close, but I didn’t fulfill it. I did reach the pinnacle at ‘55, but losing it closely (to Benson Henderson), then losing the rematch in a very controversial fight, then going down to ‘45 and getting another shot at it and being close again, I’ve been in his shoes at one point or another.”

That can break someone. But Edgar rebounded from his close 2013 loss to Aldo with wins over Charles Oliveira, BJ Penn, Cub Swanson and Faber, putting him back in business and on the verge of becoming only the third fighter to win UFC titles in two weight classes. So what was the secret?

“Just the belief in myself and knowing that if I put the time in, I’m gonna get better,” he said. “If I’m that close and I work continuously to get better, the gap’s going to get bigger and bigger and I feel that it’s been happening. I really do feel like I’m getting better at 34 years old. When you stop climbing is when you start dying, and I’m not ready for that. I’m ready to keep climbing to the top and taking what’s mine.”

Almost sounds like a hungry prospect instead of one of the division’s elder statesmen, and while Edgar is well aware that he’s a veteran of the sport, those young kids ain’t got nothin’ on him. As for the elder statesman thing, he’ll take it and embrace it.

“When you look at some of the ages, and see some of the guys that I work out with, yeah, I kinda do feel like that,” he said. “I don’t know if you’ve seen “Dazed and Confused” with Matthew McConaughey, but it’s like they get younger and I stay the same age. (Laughs) That’s kind of where I’m at. But it motivates me. I’m in there banging with these guys. I was just up at Rutgers University and I’m scrapping with 20-year-old kids, and I feel like my output is just as much, if not more, than these guys, so I’m still in it.”

That’s a good thing, because there won’t be another Frankie Edgar coming along once he’s gone. Few fighters have put together a mix or talent, heart, work ethic and class like he has, and when you’re a guy that even McGregor won’t trash talk, that’s saying something.

“It feels good,” he said of the respect given to him not just by the fans and media, but his peers. “And it goes to show that it’s not just about what you accomplished, but the character you’ve shown. I always wanted to show good character and be a good person. I remember sitting down with one of my coaches after I lost in the All-American round (in college wrestling), and he’s like ‘maybe you didn’t win, but everybody said you’re a good guy and you have a lot of character, and that goes a long way.’ And here we are, and I think it still stuck with me.”