“I’m still getting better. I haven’t even touched the ceiling yet.” – Frankie Edgar 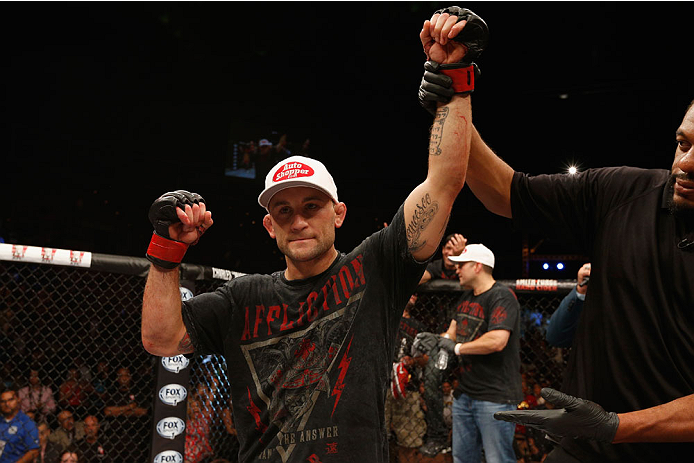 Anyone following the sport of mixed martial arts knows that I’ve interviewed Frankie “The Answer” Edgar more than any other fighter on the UFC’s roster over the past several years. He served as my fight analyst on FOX Fight Game, was a guest on all my TV and radio shows, I devoted a chapter to him in my “Fighting Words” book, and I’ve written at least four magazine columns on my Toms River, NJ neighbor.

But there was something different in his voice when I interviewed him about his fight with Cub Swanson on FOX Sports 1 this weekend.

Maybe it was the recent birth of his daughter -- his third child to join two rambunctious boys that added to the calmness in his voice, or maybe it was his steely confidence heading into this - the ninth five-round main event of his storied career.

There’s something very clinical about the 33-year-old former lightweight champion these days.
In Swanson, he faces a well-rounded fighter who has very few holes in his game, but in camp leading up to their November 22nd showdown, Frankie says trying to mimic Cub’s style would be an exercise in futility.

“I’m definitely not afraid,” he said of Swanson’s impressive six-fight win streak. “It’s tough to train for a guy like Cub because he’s so unpredictable. I didn’t so much bring in guys who can emulate him but guys who can push me the way I know Cub can. I brought in WSOF lightweight champion Justin Gaethje, who is kind of wild, and I have Edson Barboza, who is the co-main event on my card.  We’ve been training together for years. I also brought in Pat Curran to help finish up my camp.  Curran is very well-rounded and so is Cub, so it was nice to get work in with him.”

“Frankie just wants to be the best, and he’s proved that he is time and time again,” boxing strategist Mark Henry, who has worked with Edgar since before taking the belt from BJ Penn at UFC 112, says. “He’s the most resilient fighter in the UFC. He wants that belt bad, and it won’t matter if it’s Cub Swanson or anyone else in the featherweight division, he will beat anyone on the path back to Jose Aldo. Frankie outscored Aldo in the third, fourth and fifth round and he should have had the belt then. He certainly spent more than eight seconds in there with him, that’s for sure.”

Henry was referring to the highlight reel knee that Aldo threw to knock Swanson out back at WEC 41 in 2009.

But while Edgar is hungry to be ranked number one again, this time as a featherweight, he’s not looking so much at Swanson as a gatekeeper toward another shot at the title, but as someone who is as big a challenge as anyone he’s every faced.

“I don’t train to beat every guy,” Edgar said. “I train to beat one guy, and right now that one guy is Cub Swanson, who is good wherever the fight goes. If a title shot comes after that, then so be it. Cub was granted a title shot and I know he had to wait for it, so the way I look at it, if I’m going to fight again for the title, who better to fight than the guy who was next in line. Do the math - if I beat him I think I should be able to take his spot.”

However, with Conor McGregor taking on Dennis Siver January 18 at UFC Fight Night in Boston in what many feel is also a title eliminator, there are no guarantees when it comes to the next shot at Jose Aldo, a fact that isn’t lost on Edgar.

“I don’t pay attention to what people have to say,” he says. “There’s always going to be someone out there who is going to say something. I’ve been in there with the best fighters at 145 and 155, and I’ve always done more than hold my own. If I’m going to fight for the title after Swanson, I need a dominant win that is not only decisive, but is impressive. People have to be talking about it after the fact. There’s no such thing as a hundred percent chance at a title shot.”

After McGregor put away Dustin Poirier at UFC 178 in September, the brash Irishman told Joe Rogan that people in the 145-pound division don’t know what it’s like to get hit by someone his size. Edgar’s trainer begs to differ.

“Joke,” Henry said. “Frankie’s been hit by Gray Maynard, Benson Henderson, BJ Penn - guys who are way stronger than McGregor. And every time Frankie’s fought those guys, he’s always come back stronger and better in subsequent matches. It will be no different when he fights Aldo again. He’s the best in the world. Everyone on our team wholeheartedly believes that.”

Still, Frankie’s move to featherweight has been a welcome respite from the 200-pound fighters he regularly sparred with when he was the lightweight champion.

“I still train with ’55-pounders who are big guys but I can stay away from the 170-pounders now that I’m fighting at 145,” he said. “There’s no need for me to go that big, and our team has gotten so much better over the years here. Practice is very competitive and there are a lot of smaller guys here now, so I feel better after training. But I still put in the rounds. I know a lot of people have started to downplay sparring, and that’s fine, whatever works for them. But the only way to get ready for a fight is to fight. I need to go hard to know I can give 100 percent in rounds 1, 2, 3, 4 and 5.”

The Greg Jackson/Mike Winkeljohn trained Swanson – a Brazilian Jiu-Jitsu black belt - is no slouch on the ground; however, Frankie says his fight plan will come as no secret to anyone.