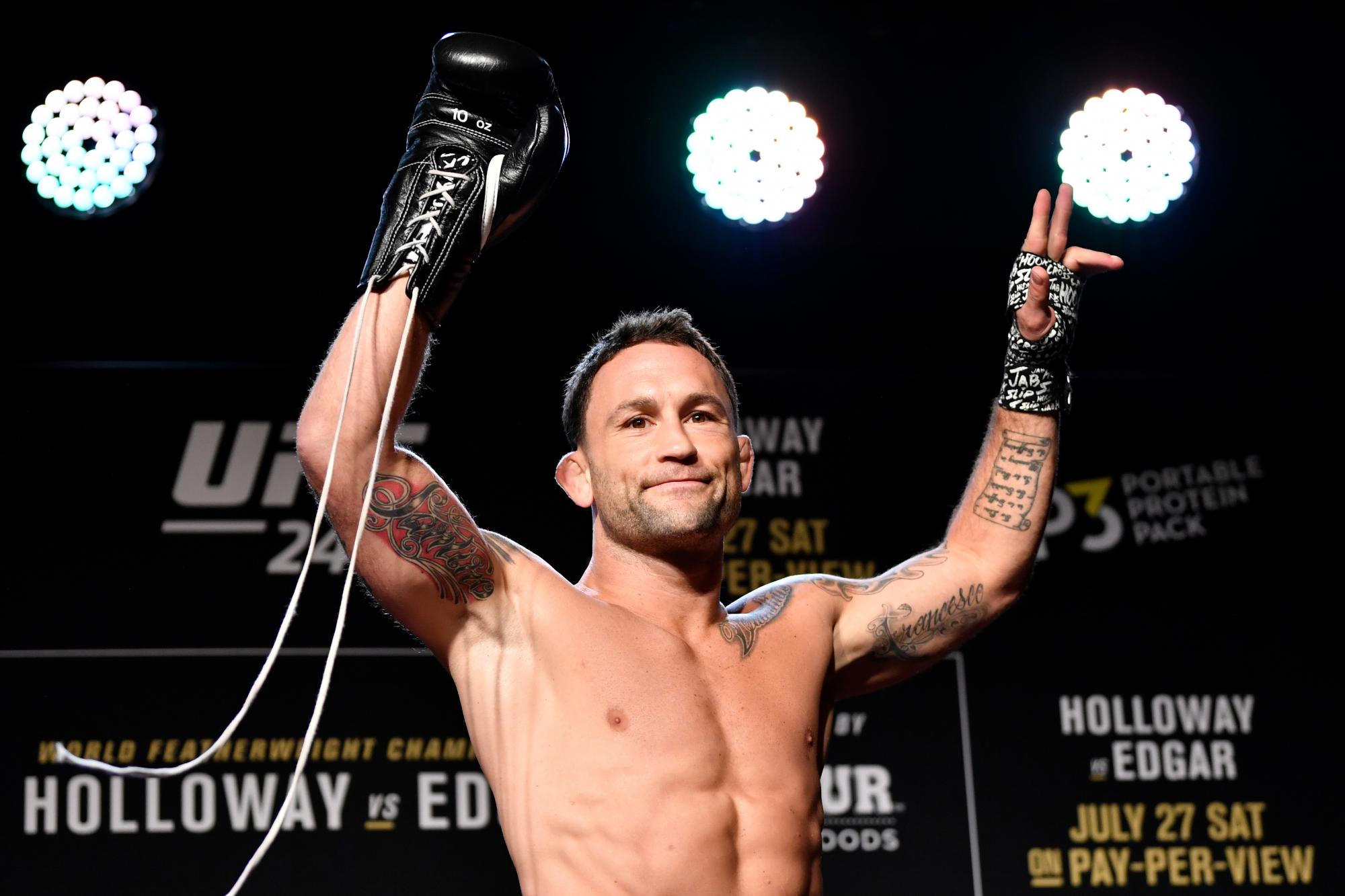 Frankie Edgar Has Been In The Game For A Long Time But He's Not Ready To Pass The Torch. He Wants His Belt Back
By E. Spencer Kyte • Jul. 26, 2019

Given the different detours and delays that have previously stood in the way of Frankie Edgar challenging Max Holloway for the featherweight title, it’s understandable that the mantra throughout the former lightweight champion’s camp was “We just gotta get there.”

The pair has been booked to meet on two different occasions, but each time, injuries have forced the cancellation of the contest a month prior to fight night.

First it was Edgar who was forced to pull out of their proposed clash at UFC 218, where Holloway successfully defended his title with a second-straight third-round stoppage win over long-time champion Jose Aldo. Then, two months later and exactly a month out from their scheduled bout at UFC 222, it was the Hawaiian who was forced to the sidelines, resulting in another twist in Edgar’s road to fighting for the featherweight title.

Tickets still available for UFC 240! Get Yours Here!

Rather than miss out on an opportunity to compete, Edgar stayed on the early March fight card in Las Vegas, sharing the cage with Brian Ortega. In the waning moments of the opening round, the unbeaten rising star put the divisional stalwart on the canvas, becoming the first man to finish Edgar in his 13-year career.

While it seemed like the loss might have scuttled his chances for contention, Edgar quickly got back in the win column, and shortly after Holloway came up short in his bid to claim the interim lightweight title in April, the duo signed on the dotted line as the headliners for this weekend’s return to Edmonton.

“That was our thing this camp — we just gotta get there and make it happen,” said Edgar, who has talked in the preamble to Saturday’s UFC 240 main event about feeling like he’s been preparing for Holloway for two years. “Now we’re here, two days away. Now I get to show everybody what I’ve been doing this last year.”

By the time he sprints the Octagon with “Kick in the Door” bumping throughout Rogers Place on Saturday night, Edgar will have been out of action for 15 months, which represents the longest layoff of his career.

An extended stay on the sidelines wasn’t the plan, but a torn bicep muscle forced him out of a fight with “The Korean Zombie,” Chan Sung Jung, back in November and now that he’s only a handful of hours away from ending his absence, Edgar is able to acknowledge some of the positives that came out of being out for so long.

“I don’t know if it’s good or bad or anything” began Edgar, who carries a 22-6-1 record into his long-awaited showdown with Holloway, “but some little stupid injuries got to heal up and sparring became fun again.

“Sometimes when you’re preparing for fights back-to-back-to-back, sparring can get a little monotonous, so the fact that I couldn’t spar for a while, I was enjoying getting back in there and mixing it up with my teammates.”

Those teammates include former UFC lightweight champ Eddie Alvarez, recent bantamweight title challenger Marlon Moraes, WSOF and PFL titleholder Lance Palmer and a whole host of young, hungry, energetic talents who are looking to follow the trail blazed by the leader of New Jersey collective commonly referred to as “The Iron Army.”

The group, which is coached by the tandem of Mark Henry and Ricardo Almeida, has become a favored destination for up and coming talent and fighters looking to take their game to the next level in recent years. That influx of new hopefuls, combined with the cast of elite holdovers, has been an integral part of what has pushed Edgar to remain at the top of his game more than a decade into his UFC career.

The other contributing factor is something most people don’t necessarily associate with the 37-year-old fixture of the championship chase.

“I’m a very competitive person — that’s why I chose this sport — and if I want to compete against the guys in our room, I have to be on top of my game and I can’t slow down,” said Edgar, reflecting on the push he gets from his teammates. “I’ve got to show these guys how this old man does it and I can’t get passed up by anybody — I’m not ready for that.

“I think it’s my ego,” he added quickly when asked what has kept him competing at a high level at an age when most of his contemporaries have started to take a step back in their careers. “A lot of people say ‘don’t let your ego get in the way of stuff,’ but I think that’s what has kept me wanting to be so dominant and still be on top of my game is that I’m not ready to give it up and pass the torch to anybody.

Saturday’s bout with Holloway will be the ninth championship fight of Edgar’s UFC career, however it’s been over seven years since the last time the former lightweight titleholder entered as the champion.

If he were to emerge victorious on Saturday night, the seven-year gap between title reigns would be the longest in UFC history, and very much feels like a perfect representation of Edgar’s enduring legacy.

“It shows my stubbornness, my consistency and my perseverance,” Edgar said of the potential new record before acknowledging that he tries not to dwell on things like records and legacy at this point.

“I think those things are for after when everything is said and done, but when people reflect on it, you definitely kind of go back to it and it’s hard not to think about it at times.”

What he has given some thought to is where a victory over Holloway on Saturday night would rank on his list of career accomplishments.

“Based on the ups and downs I’ve had throughout my career — the setbacks, the failures — I think it would top my achievements,” said Edgar, who sees a victory at UFC 240 not only as personal triumph, but also one that gives credence to the “never give up” message he preaches to his children and the kids that he coaches.

“If I’m able to achieve it (win the title), it will let me know that what I have done these last (seven) years since I lost the belt haven’t been wasted.”

Nearly two years after first starting to get ready to face Holloway for the featherweight title, the man whose mantra for the last several months has been “We just gotta get there” has gotten there.

And he’s ready to shock the world one more time.