Frankie Edgar Has A Clean Slate

Making his bantamweight debut, Frankie Edgar still has the competitive fire that made him a champion.
By Thomas Gerbasi, on Twitter @tgerbasi • Aug. 20, 2020

Not many would have thought that Frankie Edgar and Jim Miller would still be battling it out on the highest stage of mixed martial arts nearly 14 years after their bout in Atlantic City that earned Edgar the Reality Fighting lightweight title and improved his pro record to 5-0.

Four years after that matchup, Edgar secured UFC gold when he defeated BJ Penn at UFC 112. Did “The Answer” think he would still be strapping the gloves on in 2020?

“I was hoping so,” he laughs. “I didn't know how realistic it would be, but here we are.”

Here we are, indeed. Edgar, 38, is about to enter his third weight class as a pro when he makes the move from featherweight to bantamweight to face Pedro Munhoz in this Saturday’s UFC Fight Night main event. So maybe the better question is, did the fighting pride of Toms River think he would still be throwing hands at this level?

“I figured if I was doing this, it would be at a high level or I ain't gonna do it anymore,” Edgar said. “I'm not a guy that wants to lose to people I don't think I should lose to, so as long as we're at a high level, we will do it until the wheels fall off.”

I have to interrupt. Knowing Edgar a long time, I tell him that I wouldn’t be surprised if he puts out a comeback video at 53 like former heavyweight boxing champ Mike Tyson did recently.

“That would be pretty incredible,” he laughs. “I don't know if my wife could deal with that one.”

Yeah, nix that idea. So why not focus on the present, where both Edgar and Miller are as dangerous in the Octagon as they’ve ever been, with Edgar starting a new chapter at 135 pounds and Miller winning three of his last five, with his most recent victory in June being a first-round submission of hot prospect Roosevelt Roberts.

“Watching him, I tweeted out that Jim Miller's the type of guy that makes you proud to be from Jersey,” said Edgar of his former foe. “Just knowing him through the years and knowing what he's been through with Lyme disease and everything, knowing that he could pull it off makes it all that much more possible for myself.”

“You can't write us Jersey boys off, not quite yet.”

And no one is writing Edgar off, despite a current rough patch where he’s gone 3-3 in his last six. Now beating Jeremy Stephens, Yair Rodriguez and Cub Swanson while only losing to Brian Ortega, Max Holloway and Chan Sung Jung would be a six-fight string most would crave, but if there’s one loss added to his record, it’s one loss too many, and that competitive streak is what’s kept him on top all these years. It’s also what he hopes will drive him to a world championship in his new division.

I tell Edgar that such an ambitious schedule reminds me of Miller’s desire to fight at UFC 300 after already competing at UFC 100 and UFC 200. Must be something in that water in the Garden State.

“It must be,” he laughs. “We're a little long in the tooth, but we'll definitely stick it to ya.”

This weekend, Edgar sets his sights on Munhoz, the No. 5-ranked contender at 135 pounds who owns wins over the likes of Rob Font, Bryan Caraway and Edgar’s teammate, Cody Garbrandt. Edgar and “No Love” got in some work earlier this summer, and the Toms River native picked the brain of the former bantamweight champ for some insight on Munhoz.

“He (Garbrandt) gave me what he thinks Pedro does well and some things we can capitalize on,” Edgar said. “And really, it's just good to get in there with a guy that high-level. And Cody's probably one of the quickest guys in the UFC, so just to get used to that, it definitely gets me ready for the level of a guy like Pedro.” 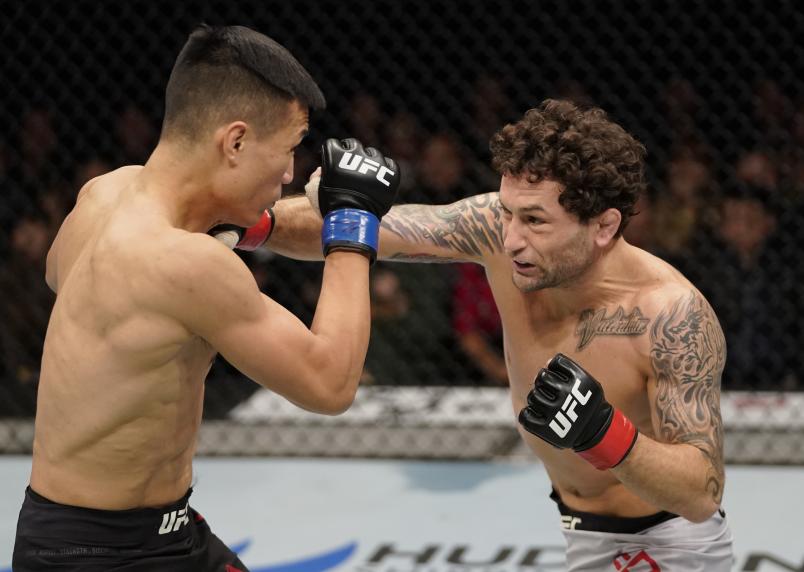 Edgar isn’t a slouch when it comes to speed, either, and looking at Munhoz’ last two defeats, he lost to a stellar wrestler (Aljamain Sterling) and perhaps the fastest man in the UFC (John Dodson). Frankie Edgar is a fast wrestler. So is utilizing those trains the key to victory in Las Vegas, or is this a fight with a clean slate going in?

“It's definitely a clean slate,” he said. “I'm different from those guys (Sterling and Dodson), but I also look at those fights and see why those things worked for them and if I could utilize speed and wrestling, I'm actually gonna do that.”

More accurately, Edgar will use whatever is necessary to get the win, whether striking, grappling, jiu-jitsu or anything in between. And that’s what gets him amped up, not just for this weekend’s fight, but for the fights to come in what has turned into the largest shark tank in the sport.

“The competition breeds excitement and pressure makes diamonds,” said Edgar. “So going down to a division like this, I know I'm gonna have to show up, I know I'm gonna have to be the best I have been in my career, and that's just motivating. It's easy to get complacent in this sport being in it as long as I have. Having that extra motivation and knowing guys are as tough as they are definitely gives me that.”