"I’m the older guy, I’m the veteran, I’ve been in some pretty big fights, and I gotta show that experience and that demeanor." - Frankie Edgar 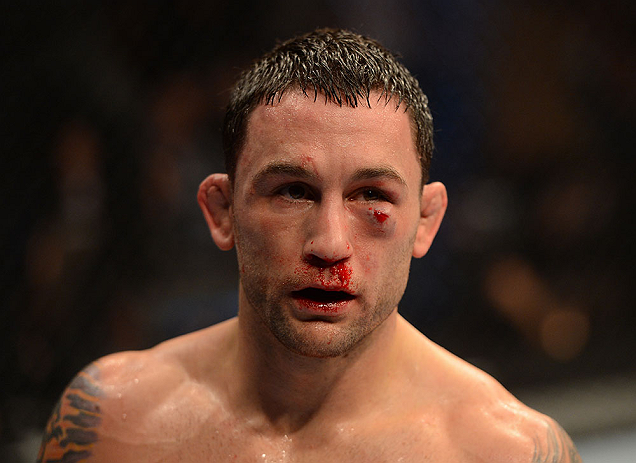 After a seven fight stretch that saw him fight BJ Penn (twice), Gray Maynard (twice), Benson Henderson (you guessed it, twice), and Jose Aldo, Frankie Edgar knows something about big fights. His opponent in the UFC 162 co-main event this Saturday, Charles Oliveira, hasn’t yet achieved what the aforementioned Fab Four have accomplished, but to Edgar, this may very well be the biggest fight of them all.

“If you asked me that (is this his biggest fight yet) for the last three fights, I’d say yes, so I guess the answer is yes again,” said Edgar. “Being that I’m in the position I am, it kind of makes sense for it to be.”

That position is one nobody would have expected the New Jersey native to be in when he ruled the lightweight division, beating Penn for the title and successfully defending it three times. But after losing the belt to Henderson in February of 2012, dropping a decision in the rematch as well, and then losing another close one to Aldo in his featherweight debut earlier this year, Edgar enters the Oliveira fight on a three bout losing streak. That’s pressure, but he’s trying not to let it weigh him down.

“I try not to think about it because there’s enough pressure just stepping in there,” he said. “I’m pretty critical and pretty hard on myself and I always want to win, so I try to get it out of my mind that (losing) four in a row would be horrible. But I’m a realist too and I get it. I just gotta make sure I do what I do and it won’t happen.”

In the eyes of many, doing what he does should have gotten Edgar the nod in each of his losses. The two Henderson bouts and the fight with Aldo were all fiercely competitive, with the consensus being that a round’s swing here or there would have resulted in Edgar leaving the Octagon with his hand raised. It’s about as frustrating a run as any fighter could have, with a knockout or submission loss almost welcome for the simple fact that in that scenario, there are no What Ifs.

“Someone’s asked me in interviews before, ‘what do you do to get better?’” he chuckles. “I think I’m doing the right things. I’m fighting the best guys and I’m putting in good performances. I’m really not ashamed of any of my performances. I think no matter what, in any fight, there are always things that you can do better and improve on, but I’m still proud of what I’ve done in my last three fights.”

So what’s “The Answer” (pardon the pun) when you’re putting on solid performances that many observers believe are also winning ones?

“I don’t know,” said Edgar. “I wish I had an answer for it, but I don’t. Maybe I need to start out a little quicker. I feel like I finish strong and I push the pace in most of my fights. Maybe I need to do that a little bit faster.”

Or maybe it comes down to some judges looking at his face during rounds and judging the blood, not the fight. The crowd pleaser from Toms River has become notorious for almost starting to bleed while walking to the Octagon, and that may have biased some judges against him.

“My nose bleeds in sparring, and my eye always gets a little puffy, so I guess it’s something I have to deal with,” he said. “But I agree. I don’t think you should be judging fights like that. But if a fight is kind of close, you could say ‘that guy’s a little more banged up than the other.’ I guess that’s what they’re looking at.”

Yet through it all, Edgar not only remains a fan favorite, but the tenth ranked member of the pound-for-pound list voted on by the MMA media. That’s impressive, considering that he’s the only one of the group who doesn’t hold a UFC championship belt at the moment.

“It speaks for the performances I’ve put in, whether I’ve won or lost, and the level of competition I’m fighting,” he said. “I’m not really big on the pound for pound rankings. It’s obviously opinion based and there’s really no set way to clarify who’s number one and who’s number ten. But it’s nice to know I’m appreciated.”

That appreciation level will grow should he dispatch Oliveira this weekend, not an easy feat by any measuring stick you use. The Brazilian has a four inch height advantage, he’s an aggressive finisher, and he’s on the hunt from the time the opening bell rings, all traits which Edgar is well aware of.

“He’s a dangerous young kid,” said Edgar. “He’s tall, he’s got a lot of length, he’s pretty diverse in his strikes, and he has a dangerous submission game. He’s willing to go for broke on his submissions, so that’s always you have to be aware of when fighting a guy like that.”

The 23-year-old Oliveira is also the kind of fighter you don’t want to let get out to a fast start. When he’s done that, he’s been hard to stop. But when in with veteran opposition that took the initiative early, like Jim Miller, Donald Cerrone, and Cub Swanson, “Do Bronx” has come up short. Expect Edgar, fighting in a three rounder for the first time since 2009, to use that fast-starting blueprint.

“I kinda gotta ‘son’ him,” laughs the 31-year-old Edgar. “I’m the older guy, I’m the veteran, I’ve been in some pretty big fights, and I gotta show that experience and that demeanor. And I’m gonna go there and be the one pushing him around.”

If Edgar sounds like the hungry kid out of Jersey that first took the UFC by storm over six years ago, that would be accurate, and it’s a welcome sign as he hopes to return to the win column. That’s not easy to do, especially after seeing how the fickle hand of fate (or a judge’s pen) could sour a fighter on the game. Edgar opts not to see things that way.

“I try to remember why I originally did this,” he said. “When I first got into it, I didn’t do it to be famous or to make money or anything; I just enjoyed competing and fighting. So I try to keep it simple. The years are going by fast, so I just want to make the best of them, keep putting on these good performances, and let everything else take care of itself on its own.”