Frankie Edgar: From dreams to reality

Before the world knew who Frankie Edgar was, the former UFC lightweight champion was just another kid from Jersey with dreams of making a living as a prizefighter.

Those dreams took him to the Jerome Boxing Club in the Bronx in July of 2005, where the 23-year-old was going to compete in a mixed martial arts fight that bore little resemblance to the one he will engage in on Saturday night in Madison Square Garden.

More than 11 years ago, MMA wasn’t even sanctioned in New York, leading to shows like the UCL (Underground Combat League). And for those who stepped into that ring, it wasn’t about money or championship belts, it was all about the fight.

So Edgar packed his mouthpiece and took the drive from Toms River with his team and his father, as well as his future wife Renee, who already had an idea where her boyfriend was heading career wise, despite his day job as a union plumber.

“She had seen me get into it quite a few times at Seaside (Laughs), and that fight was more a street fight than anything, so I think it was kind of normal for her,” Edgar said of the bout, which was a far cry from what “The Answer” would later experience in sanctioned MMA bouts.

“We drove up to the Bronx on a Sunday, and it was probably 110 degrees in that gym,” he recalls. “There was no ambulance there, there was no weigh-in, there were no rounds. We were just doing a 15-minute go.” 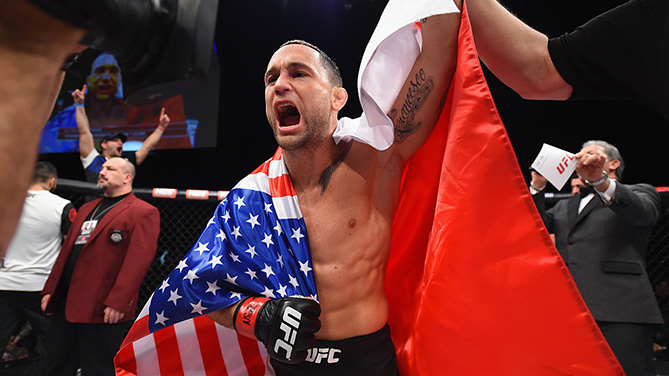 Watching the grainy YouTube video today, Edgar doesn’t look much different from what he looks like today, though his defense has improved considerably from then, when he took several hard knees to the face in the early going from opponent Eric Uresk. One of them broke Edgar’s orbital bone, but he didn’t realize it at the time, and he didn’t stop moving, eventually getting Uresk to the mat, where he finished him with strikes at the 3:38 mark. Edgar also pulled out some old school Mark Coleman before the finish.

“I remember head butting the kid,” Edgar laughs. “And I also remember breaking my face in that fight as well.”

Call it adrenalin, but Edgar knew nothing of the break until a celebratory dinner.

“I went out to dinner with my team and my family, and I didn’t really look like I got hit at all, but I had a bloody nose,” he said. “I went to blow it, and all of a sudden my face blew up because I broke my orbital bone. Being a young, dumb kid, I’m trying to push it out of my eyeball thinking I can get the air out. (Laughs) It didn’t work out too well for me.”

The future Mrs Edgar wasn’t too happy either, but as her husband points out, “She stuck by my side and she’s still here, so I guess we made out all right.”

In life, absolutely. But when it came to the fighting end of things, that summer afternoon in 2005 wasn’t exactly lucrative.

“I made $60 dollars and broke my face in my first fight,” he laughs, but he wasn’t deterred in the slightest. “If anything, that solidified it for me. I knew I could take punishment and I knew I was nutty enough to sign up for another fight after that. Good thing I was a plumber and was in the union, so I had good insurance at the time.”

Fast forward to the present day, and Edgar, the No. 2-ranked featherweight in the world, is about to fight Jeremy Stephens on the historic UFC 205 card in New York City. Iowa’s Stephens, no stranger to coming up the hard way in the sport, recently gave me his thoughts on Edgar, whose fighting spirit hasn’t dulled in the slightest over the past 11 years.

“Frankie’s a true champion,” Stephens said. “He hasn’t been broken, he’s hard to rattle, he hasn’t been knocked out, and he doesn’t run away from fights like other people in the division. He’s a real true, born and bred fighter, and that’s why I respect him and why I train hard for fights like this.”
RELATED: UFC 205 prelims preview | Edgar featured on Submission of the Week | Check out Edgar's fight history

Edgar appreciates such sentiments from his future opponent.

“Jeremy’s a fighter himself, and it kinda takes one to know one,” he said. “He’s that guy too. He comes after guys, and I keep saying I’m not gonna have to look for him in this fight. He’s definitely going to be in my face the whole time.”

That means on a card filled with great matchups, Edgar-Stephens could be the best one, a Gatti-Ward for the MMA world.

“I don’t know if anybody will ever live up to Gatti-Ward, and I don’t know if my face wants to have to go through that,” Edgar laughs. “But to put on a fight like that in a place that I consider home and in front of that crowd, that would be something. But first and foremost, I’ve got to get that win. I don’t like losing, and tasting it in the last fight (against Jose Aldo) was tough.”

In his UFC 200 rematch against Jose Aldo, the result was the same as the first bout, Edgar in the fight all the way, but losing a decision in the end. It was a crushing blow for one of the hardest workers in the game, but he hasn’t gone back to analyze the fight.

“I’ll be honest, I haven’t even watched the fight because I may throw something at the TV,” he said. “And I like my TV. And my wife would kill me if I did that.”

He laughs, but that pain hasn’t gone away yet. And the only cure isn’t available until November 12.

“It (losing) definitely stung – it may still sting and I don’t know if I’ll ever get over that, so the best way to get over something like that is getting your hand raised,” he said. “I’ve put my work in, I feel like I corrected some things I feel I didn’t do right in the last fight, and I’m gonna go out there and give it my all like I always do, win or lose, and like Jeremy said, no one’s broken me, and nobody’s gonna.”

And if you see someone running into the Octagon this Saturday, it just might be that kid who loved fighting so much that he once did it for sixty bucks in an old gym in the Bronx.

“I’m gonna run in because the emotions are definitely gonna take a hold of me and emotions are like fire,” Edgar. “The fire’s in me and I can’t lose it.”