Frank Mir: The Wait for Barnett is Over

"The two of us are going to collide and it's going to be a moment to be
talked about. This is not going to be a fight that will be forgotten. If
you tune in to watch, you'll be a part of history." - Frank Mir 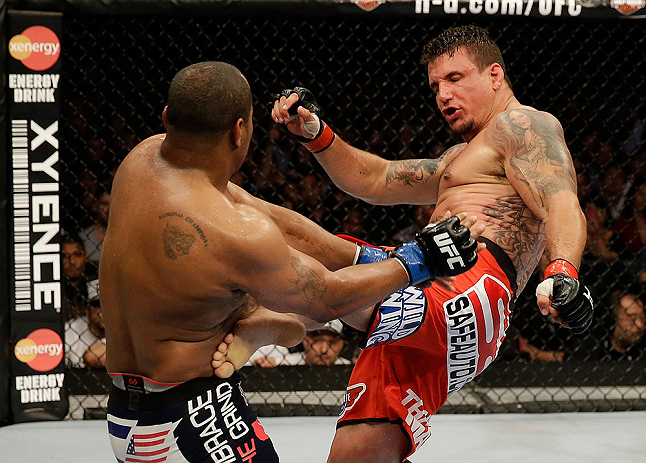 The winningest heavyweight in UFC history has found the fountain of youth… in Albuquerque.

After 12 years successful years inside the Octagon, earning the UFC heavyweight championship and interim UFC heavyweight championship belt, Frank Mir decided it was about time to move his fight camp from the city he was born and raised in to the MMA Mecca in New Mexico. Following his title bout loss to then champ Junior dos Santos at UFC 146, Mir joined arguably the most highly-regarded fight team in the world, Jackson-Winkeljohn. The results of the Las Vegas native’s first training camp in Albuquerque were obvious at weigh ins last April prior to the bout with Daniel Cormier, but ultimately went underutilized on fight night, which Mir will not let happen again.

“I really didn't understand the new physique I had,” admits Mir. “It's like a racecar driver getting into a new car. The first couple laps, you're really finding out what you have and how hard you can push. It was unknown, uncharted waters for me. Now, coming into this next camp, having the same level of physique for this next camp meant I was able to push hard the whole time to really see what my limitations are.”

At 34 years old with a pro record 16-7, including an incredible 21 Octagon appearances, Mir looked like a trimmer and more defined athlete than he has in a decade-plus with the UFC. It wasn’t just a beach body, as the hard workouts with the Jackson-Winkeljohn crew led to Mir cultivating a real gas tank for what he believes is the first time in his career. That revelation may not come as a shock, with Mir having been a prolific first round finisher (10) and never a distance fighter. What is surprising is a veteran making a drastic change to push himself out of his comfort zone, but for Mir, this UFC career has simply been a vessel for his lifelong quest as an evolving martial artist.

“Honestly, I really just fight so I can train martial arts,” reveals Mir. “I come with a paycheck for the wife, so I can validate going to the gym and doing what I love to do. Whereas other people, they might just train to win a fight and what that enables them to do in life or what ego boost they need. My journey has always been to be a better martial artist. People can see with my actions in moving out here and joining a new camp with Jackson-Winkeljohn’s - I'm expanding my abilities. Most guys who have been in the UFC for 12 years, they find their own pattern and they get comfortable in what they're doing because their goal is to just win fights and not to become a better martial artist. Winning fights has a lot to do with your opponent. He could have a bad day and I win the fight, but it doesn't necessarily mean I've improved in my last camp.” > Flashback: Mir vs. Lesnar

Although, he took a decision loss to Cormier at UFC on FOX, Mir didn’t feel tired in that third round like he normally would have, and he appeared to be putting some offense together with body kicks in that final five minutes. “I think in the past I've limited my abilities with my conditioning,” says Mir, who didn’t push the action early enough against Cormier because of an outdated mindset about himself gassing. “What I've seen in the last 12 years of my career has been a pacing mentality; before, I needed to pace myself. If it was only a one minute round then I could show off a ton of great stuff, but knowing that I have to go into deep waters I think I've always held back because of being tired. Being in great shape, I can now push.”

Up next for Mir and his new physique, a rumble with a storied rival which fight fans have been itching to see for the majority of their careers. At UFC 164, in the co-main event, it will be a battle between two former UFC heavyweight champions as Mir takes on Josh Barnett. The pair of vaunted submission specialists first graced the same Octagon in November 2001 and have continued to be named among the elite of their division ever since. Only two years apart in age, both grappling greats have wreaked havoc on their opponents while maturing as all-around fighters, with Octagon enthusiasts praying the pair’s paths would one day cross.

“I've always wanted to fight Josh Barnett,” states Mir. “I think we have similar styles. When people talk about submission fighting, our names get brought up in the same sentence all the time. I think it's a great fight. I think if I stepped outside of myself, I think this is a fight that should be done. And I've always wanted to test myself against Josh. He's a great grappler, he's a great MMA fighter. I think he'll go down in the books as one of the better MMA fighters of all-time. I like having those type of guys on the list of guys I've faced. I actually called [the UFC] and asked for the fight. I wanted to make sure that there was no feeling out process for Josh.”

It’s shades of Wanderlei Silva vs. Chuck Liddell. While Mir has held court in the UFC for all these years, Barnett has roamed the wild MMA landscape with memorable stints in PRIDE and, most recently, Strikeforce. At 32-6 including 18 subs, Barnett is and has always been the big, American, submission wrestler that has needed to face the big, American, submission wrestler in Mir. While many grappler vs. grappler matches regretfully never find themselves on the ground, Mir and Barnett are both competitive enough and showman enough to pit their strength against the other’s, which was put on display in their respective matches against Antonio Rodrigo Nogueira.

“It's the confidence and bravado that Josh and I have with our submission abilities,” explains Mir. “I know that I know I can go to the ground with anybody in the world. It's never ruled out that I can't catch a guy in a submission. Sure, I have bad days and guys can out position me, but there's always going to be the threat of me finishing the fight there. There's always the chance that I'm taking something home with me. I think Josh has the same mentality. I think that's why you see that aggressiveness from us in going for submissions on the ground.”

Worrywarts feared “The Axe Murderer” and “The Iceman” couldn’t bring the three round slugfest which they had fantasized about for years, but Silva and Liddell delivered a Fight of the Night. Meanwhile, Barnett and Mir are fine wines of their craft, appearing to still be at the top of their game. Barnett has won nine out of his last 10 fights, with the lone defeat a five round decision loss to Cormier in theStrikeforce Heavyweight Grand Prix final. And Mir is two training camps in with his vastly improved cardio. It’s a combative chess match that’s complexity has only grown with age and has the very real possibility to be better today than any time prior. > Watch: Frank Mir's UFC Breakthrough

“I am a much more accomplished fighter now,” tells Mir. “Especially with me out here at Jackson's and with this conditioning. I think that will lead to a much more exciting fight. If we had fought in our early 20's, I think it would have been about who could catch who first early on in the fight without knowing what the fight would materialize into. Now, I think I have the conditioning to go for a rough ride for all three rounds if I need to, and the fight can end at anytime with a submission.”

Help from His Friends

It takes a village to prepare a champion, and Mir is trained by a heavily-credentialed cavalcade of coaches in both Albuquerque and Las Vegas. For his standup, Mir’s longtime boxing coach Jimmy Gifford’s work has been supplemented with Mike Winkeljohn and Winkeljohn’s protege Brandon Gibson. For his ground game, Mir brought Ricky Lundell, 2nd degree BJJ black belt under Pedro Sauer, to New Mexico to work alongside Greg Jackson and Chris Luttrell. For conditioning, Mir has Rich Montoya and the litany of incredibly training partners like Travis Browne, Jon Jones, Carlos Condit, and Pat Barry to thank.

“It's a whole team of guys that are all truly teammates,” asserts Mir. “If someone lands a move on you, they will tell you right away after practice how they did it and how you beat it. We're all competitive and we all want to have a good day in practice, but no one wants to do it at the expense of others. We're all buddies and we're all friends and we go eat lunch together and we try to build each other up as much as possible, then we go against each other in the gym and win against the best versions of each other. Everyone strives to make sure there is no weak link in the gym.”

This Saturday at UFC 164 in Milwaukee, Wisconsin, two of the sport’s greatest heavyweights will finally tangle inside the Octagon, as Mir battles Barnett. “I think my fight with Josh could very well go down in the history books,” affirms Mir, who has wanted this matchup since his 20s and now, he’s a better fighter and in better shape for it. “The two of us are going to collide and it's going to be a moment to be talked about. This is not going to be a fight that will be forgotten. If you tune in to watch, you'll be a part of history.”