Frank Mir Still has Work Left to Do 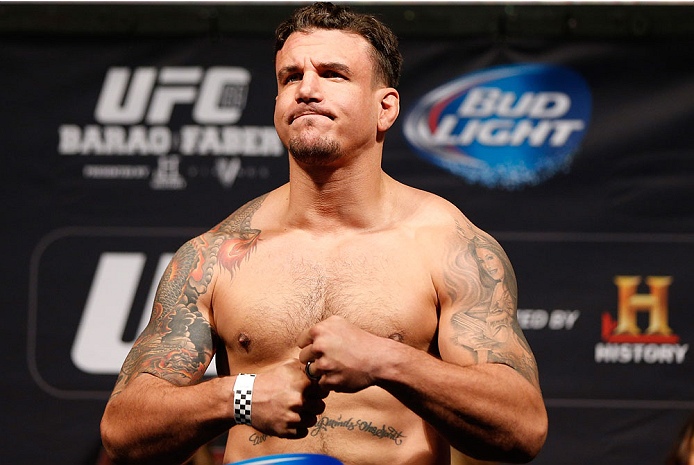 The answer hangs in the air and it’s the last question I will pose to Frank Mir for this piece. He faces Antonio “Bigfoot” Silva in a UFC Fight Night main event this Sunday in Porto Alegre, Brazil.

For Mir, this fight is a test after a year sabbatical from fighting.

Ranked 13th in the world, the former UFC heavyweight champion is unlike any other fighter in the UFC. Sure, there are other comeback stories, like Matt Brown, who was once brought back to life after a drug overdose and who fought his way all the way to a title elimination bout against newly-minted welterweight champion Robbie Lawler last year. But not many fighters were stripped of their title after what should have been a career-ending motorcycle accident like the one Mir suffered in 2004. Not many fighters would have to relearn how to walk, never mind have to start all over again as a fighter in a division you were once champion in.

Mir’s kind of mental fortitude is rare. He could have disappeared from the MMA scene after tearing all the ligaments in his knee and shattering his femur bone, and nobody would have blamed him.

Instead, Mir returned to the fight game to give MMA fans some of the most devastating submission victories inside the Octagon. A guillotine choke that left Cheick Kongo face down, fast asleep. The infamous kneebar submission of Brock Lesnar. The toehold he tapped Tank Abbott with. But there was nothing more devastating than the Kimura that forced Antonio Rodrigo Nogueira to submit.

However, Mir doesn’t really like to talk about his triumphs. The way he sees it, what good is a world-class athlete who can’t even do basic yoga moves in a class full of suburban mothers.

“It’s extremely frustrating,” Mir said. “I went to a yoga class with my wife and I wasn’t able to do the positions. I’m like ‘Wait a minute.’ This is a class with a bunch of soccer moms and I’m supposed to be this elite professional athlete and I can’t do a downward facing dog for more than fifteen seconds without my arms quivering and shaking. How can I expect to be a high-level fighter if I can’t do basic movements on the ground?”

And that’s when Mir decided to take a sabbatical from the sport he helped build. At age 35, Mir’s body was just not cooperating with its hard-headed owner. The proof of that would be four consecutive losses and subpar performances.

Mir drew the line with himself.

“I was having a bad streak there for a while, so I’ve taken a year off to evaluate what I needed to fix and address, and I feel like I’ve given myself enough time to heal up properly and have a proper off-season and build up my physical activity again,” he said. “I worked on mobility so I can be more efficient and proficient in fighting. And that’s what this fight is. It’s an opportunity to show I’m still able to perform the moves that I know how to do.”

Mir underwent two surgeries in 2012 after losing to Junior Dos Santos, but then re-injured himself while training for Daniel Cormier. Mir said he should have listened to his body back then, but instead, he took two more fights with Josh Barnett and Alistair Overeem and arranged his training around nagging aches and pains.

“I was being delusional,” he said. “Over the last few years, my brain knew what move I had to do during the fight, almost like a coach in my own head, saying ‘Okay, you need to sit out and then wall walk,’ but the conditioning just wasn’t there. I was constantly training around injuries and scheduling my camps around injuries. The time I had elbow surgery I had to adjust training because it wasn’t healed yet. Same thing with shoulder surgery; my range of motion wasn’t there yet. So instead of taking time off to address these issues so I can throw a punch properly or do a pushup or a downward facing dog position, I would just not do those things at all, and I end up doing patchwork. Well, you can’t do that in a fight, not at this level. How do you get a guy to do a get-up position from guard when he can’t even do three pushups because his shoulder or elbow is hurting? So when I’m in a fight and I try to execute a move and I can’t because I haven’t practiced it in a gym leading up to the fight, that is what leads to the type of performances that I ended up with.”

Fighters are unique athletes. That’s not to say every sport doesn’t have its own trials and tribulations, but there’s something about being punched and kicked that makes fighting a little more personal. But when your own body is beating you up...

“It is extremely frustrating.” Mir will say “frustrating” several more times during our conversation. “I understand now when people get older and they say they can’t do that anymore. The brain knows what to do but the body is just not willing. At first, I thought I had to retire but after about two months off I thought ‘Maybe not. Maybe if I am able to heal.’ That’s when I started being more diligent with my physical therapy outside of a fight, not waiting until six weeks before a fight to get better. I took the time to proactively heal my body to become an athlete again. And I didn’t give myself a time frame on how long it will take me out of the ring. I was willing to take the time off to work on my shoulder mobility. I wanted to be able to do fifty pushups again. I wanted to be able to jump on a box that pretty much everyone else in the gym can jump on. I wanted to heal my rotator cuff problems, and my elbows. I wanted to take a yoga class with my wife without having to tape up everything like I’m getting ready to fight somebody. And once I got to that level I was feeling really good and thought I could fight again.”

These days, there is something different about the man as he prepares to enter the Octagon against “Bigfoot” on Saturday. It’s almost like he hates what his body has put him through and, as a result, there’s a brutal honesty he is willing to share that most fighters avoid.

“During those tough years I wasn’t winning in training at all,” he said. “I was constantly being smashed in training. It’s so frustrating as a fighter, seeing a punch coming at me and I’m thinking ‘I need to slip to my left’ and trying and trying and nope, I can’t do it. So I get hit in the face. Some guys leave the Octagon and say ‘What happened?’ I was leaving saying ‘I will tell you exactly what happened. He set me up this way and that way and caught me here and there.’ I can play the chess match with the best guys in the world but I couldn’t execute with my body.”

These days Mir is feeling better physically. He took the necessary time off to heal properly, and he’s seeing positive results.

“In sparring I haven’t lost a round,” he said. “In rolling, I would get a fresh guy on me and I’m able to do anything I want to do. I can sprawl properly now when a guy shoots in for a takedown. I can do the athletic stuff I was able to do that made me good at Jiu-Jitsu in the first place, like jumping up for a triangle and diving for a heel hook. Even my stand-up is better because my legs are fresh and not aching. When I fought Nogueira the first time I was bouncing and moving and using angles, and since then it’s not like I forgot how to box, it’s that ‘this hurts,’ so I stopped training it. And a lot of fighters have this ego that tells them if they’re not training a certain move, ‘Well, I’ll just make it happen in the fight.’ You get to the point where you’ll avoid it in the gym but think you’ll make it happen when the lights come on. That’s delusional.”

And while it takes a certain amount of delusion for one to step into an Octagon in the first place, for Mir, the reality check of four losses outweighed the delusion of invincibility.

“Fighters have to be able to lie to themselves in order to make them believe they’re immortal, but, in my case, after the Dos Santos fight I had two surgeries to try to address some injuries and I took a fight immediately, and then training for the Cormier fight I got injured again and that should have been a sign going off saying ‘You might need some off time.”

On Sunday night, expect a better conditioned Mir. Expect a fighter who has boxed at full power in this camp, wearing headgear and 22-ounce gloves for the first time in his career so that he can go full blast with training partners the way he will against Silva.

“Sometimes I’m in the gym watching guys in the lighter weight classes and they’re able to spar at a much higher intensity and bang each other up,” he explains.“Whereas with the heavyweights we sort of have to save it for the fight. I used to train that way where we would have agreements with each other, don’t go that way or this way, but now I have a new boxing coach named Angelo Reyes and his philosophy is ‘You need to throw full blast like the little guys do.’ So we put on bigger gloves and head gear and train because if you don’t you’re going to get tired in the fight because you’re not used to throwing hard. A lot of MMA gyms you’ll walk in and see guys not wearing headgear and big guys still wearing 16-ounce gloves. The protective gear just isn’t there, so we pull back and we’re actually hurting our chances of winning in the fight. So now I’m getting used to MMA fighting with headgear on and bigger gloves and my stand-up has gone through the roof.”

So now I ask my last question, and I’ve saved it for last on purpose. It’s a question I admittedly hate asking, but when MMA fighters reach a certain age, it’s inevitable.
Win or lose on Saturday, if you retired after this fight, would you be satisfied with your career?