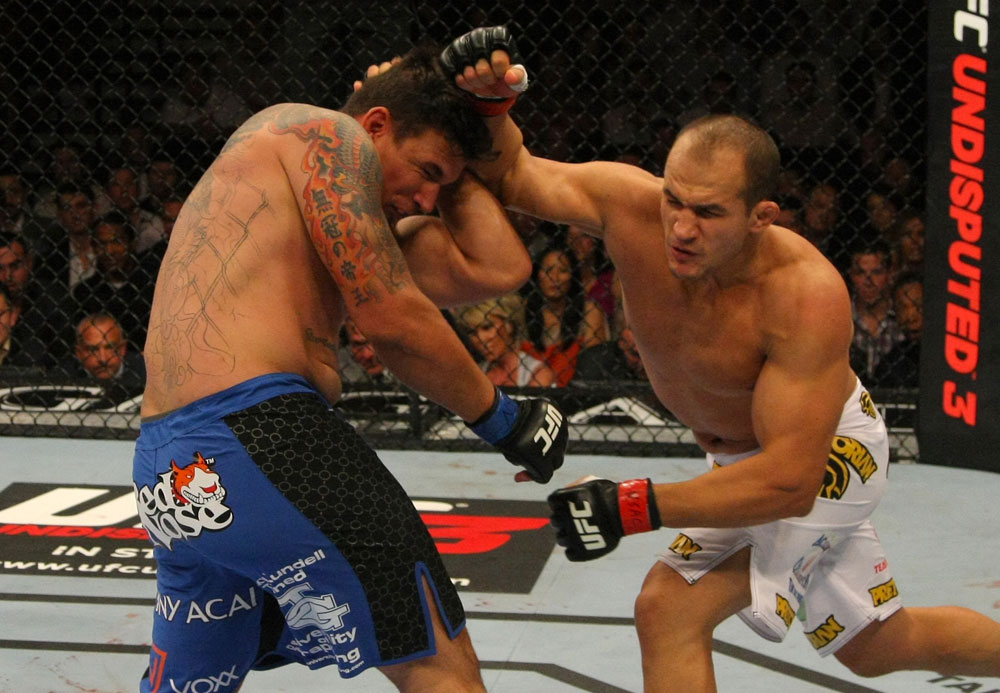 It has been a difficult year for the UFC, as some of the organization’s biggest matchups have fallen victim to the injury bug. That being said, the sport’s most prominent promotion is looking to end the year with a bang, as one of the most anticipated rematches in recent years will go down at UFC 155 when champion Junior dos Santos looks to defend the title he took from Cain Velasquez.

The two heavyweight juggernauts will throw down on December 29th in Las Vegas, in a fight which will determine who is officially the “baddest man on the planet”.

When the two men initially squared-off at UFC on FOX 1, the former ASU wrestling standout was coming off a shoulder injury which had sidelined him for over a year.  It only took “Cigano” 64 seconds in their first meeting to crumble the AKA-trained fighter with a monstrous right hand, and Velasquez has his sights set on regaining championship gold.

With the heavyweight showdown looming, UFC.com caught up with former two-time heavyweight champion Frank Mir to get his thoughts on the upcoming title fight.

“JDS is a very elusive striker and has the best footwork in the heavyweight division,” Mir said. “He uses his speed and maneuverability very well. It has helped him become the champion and I believe he has the potential to be the champion for quite some time. I think he has a phenomenal jab and his footwork enables him to land punches and stay off the cage. It allows him to keep the fight where he is the strongest.

“I think Cain Velasquez has a great work ethic and is a very well rounded mixed martial artist. I think his striking has come a long way. He’s an excellent grappler but he’s not as elusive as dos Santos. He’s going to have to be more diligent in moving forward. He’s going to have to create angles, cut off the cage, and try to corner JDS in order to create more of close range fight.

“I think in a close range boxing match, Velasquez could do very well, but in a long range striking or boxing match, JDS will have the advantage striking wise. If that were to be the case, Velasquez is going to have to utilize his kicks, which I believe dos Santos is very susceptible to.”

Many in the MMA world believe for Velasquez to be successful, he will have to find a way to put the champion on his back. This is a situation Mir is familiar with, as he faced the Brazilian in May at UFC 146. Despite his best efforts, Mir was unable to put Dos Santos on the canvas and was forced to engage in the standup game, where few have been able to survive against the current title holder.

“Dos Santos is very difficult to take down,” Mir said. “He is obviously one of the best in the world right now in the boxing realm and wants to keep the fight standing. It isn’t so much that he is anti-wrestling, because he is good at avoiding the shots, but we’ve also seen him in the clinch and be able to nullify some wrestling there well. But I think one of the strongest attributes in his skill set is the ability to avoid being in a position where shots can be taken on him.

“In their first fight, Cain did shoot on him for a second, but the shot came from far away and JDS was able to defend it because of the distance between them. If Velasquez is able to work himself in a little closer in this fight, I think he could find some success with his wrestling. It’s just really hard to get close to JDS because of the power he has in his hands.

“I think this fight works out differently than the first,” Mir added. “Obviously predicting a quick knockout over someone of Velasquez’s caliber would be very foolhardy. I think the first time, dos Santos caught him and we are talking about heavyweights, where those things happen. But as far is it being something JDS could repeatedly do to Velasquez over and over again, I would be hard pressed to say you could legitimately argue that. I think JDS could still catch him, but he’s going to have to work harder for it in this second fight.”