For Frank Mir, Change is Good

"He’s a great wrestler, comes from a good camp, and I think by having a win over him, it still moves me forward in my career." - Frank Mir 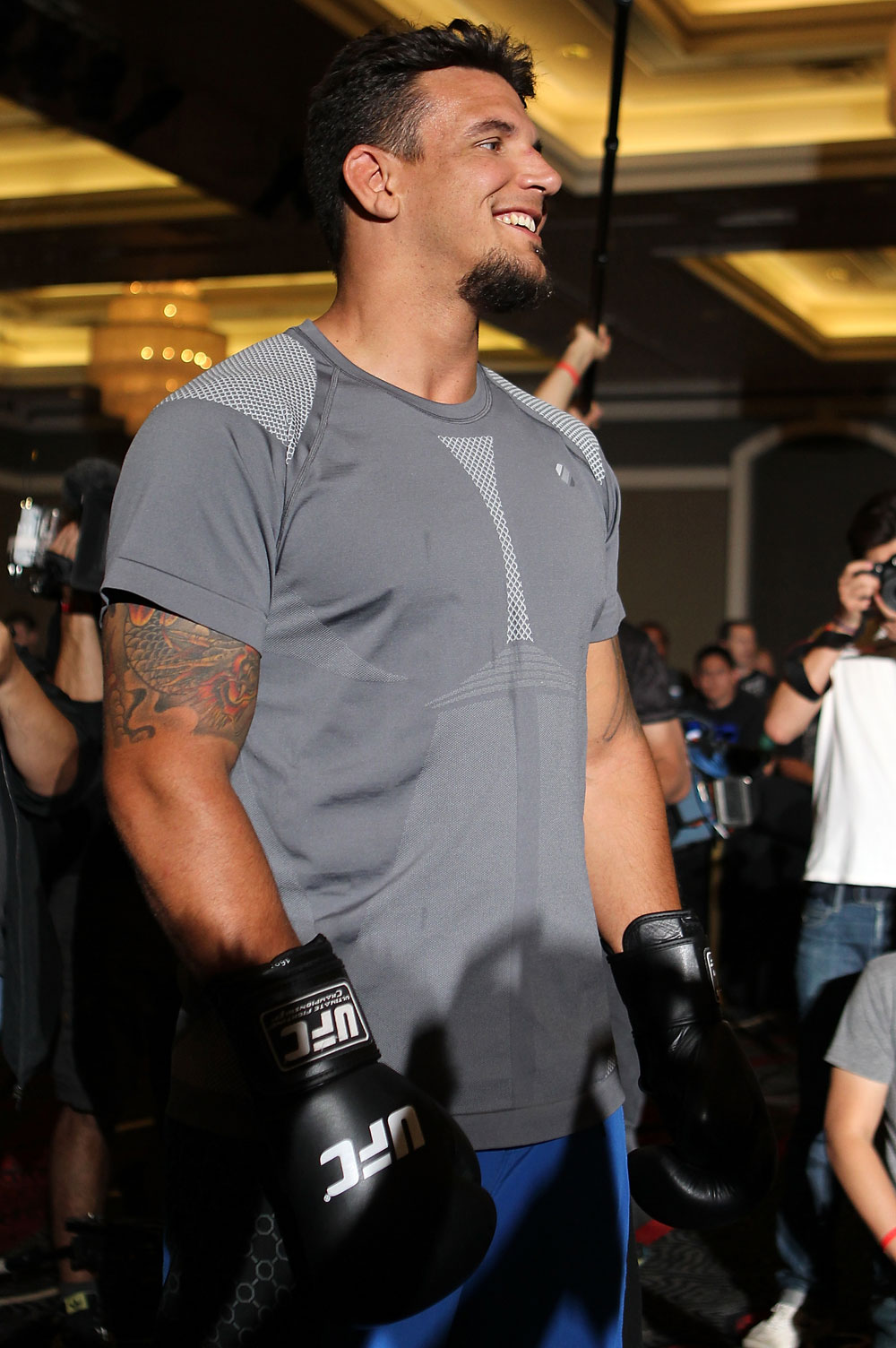 It was the UFC superfight that never happened, killed off by a motorcycle accident and then timing. But in the Jackson / Winkeljohn MMA gym in Albuquerque, New Mexico, two former UFC heavyweight champions – Frank Mir and Andrei Arlovski – did eventually meet.

“At first, I think when we walked into each other, it was the fight that should have happened kind of scenario,” laughed Mir. “But within a couple hours of meeting, everything was easy going. We had great sparring and wrestling and communication back and forth. He would give me points of advice, and it was very much a team atmosphere.”

Yes, the two men who the world wanted to see fight years ago were now teammates. It’s the latest twist in a career full of them for two-time heavyweight champ Mir, who decided after his UFC 146 loss to Junior dos Santos last May that it might be time for a change. And that meant leaving Las Vegas.

“Making the change to go train was just a good idea to move forward in my career, and I just chose Albuquerque because Greg Jackson and his team have had a lot of accolades and accomplishments, and I’ve seen what they’ve done,” said Mir. “And I’ve always gotten along with him real well, so I figured that would be the best fit for me.”

He was right. Despite having to leave his wife and children to prepare for Saturday’s UFC on FOX 7 co-main event against Daniel Cormier, Mir has rejuvenated himself for what could be a third title run if he can spoil the debut of the Strikeforce Heavyweight Grand Prix winner.

“I’m just more focused on training itself,” he said of working at Jackson’s. “It’s easier for me Monday through Friday when I’m over there to be a fighter and not have to go to the gym, come back, and be part of fatherly and husbandly duties. I broke myself down and looked at what my weaknesses were, and I realized that I have to focus more on the training when camp comes around than focusing on the fights. And staying home made that very difficult to do. And I’ve seen fight after fight and year after year that it just was something that wasn’t fixing itself, so I had to make a proactive decision to see how could I make myself more dedicated and focused during the weeks before a fight.”

That’s a lot to take in and to change at this point in a fighter like Mir’s career. With two heavyweight titles, 22 pro fights, and nearly 12 years in the sport, that’s usually enough for a fighter to say, hey, I am who I am, I know what I know, and I’ll use what I’ve been using to compete on fight night. The 33-year-old Mir decided to go in another direction.

“I think with my personality I’m pretty laid back and I don’t think as highly of myself as other fighters might think of themselves,” he said. “I don’t need that false sense of security to push myself in fights and get me through. I’m actually very pragmatic and very analytical about how I break myself down. So walking into a gym and putting myself out there to better myself is a positive thing, so it’s never really difficult.”

That mindset helped him adjust to Jackson’s after a career spent training in Vegas, and even as the “new guy,” it wasn’t a case of his new teammates trying to make a name for themselves by putting it on Mir in sparring.

“A few people expressed concern that that would be the case, but it wasn’t at all,” he said. “Everybody there is real laid-back, and I think it also helps too that I didn’t come in there thinking that I owned the place. The goal is to become a better martial artist, so that when I would train and spar, they would lay out the objective ahead of me and that’s what I would focus on. At the end of the day, it’s a professional gym. They all realize that I don’t get paid for what I do in sparring. If I go out there and knock out six guys in a row, guess what, no one cares. (Laughs) If anything, that just means that I’m risking injury and harm and I’m not gonna have training partners. And everybody else has that same attitude. They don’t want to cheat you by going too easy and soft on you and giving you a false sense of where you’re at, but at the same time, I’ve never had that thing where people were trying to gun for me. Everybody wants to train and get better.”

And Mir will have to be on top of his game against the unbeaten Cormier, a former Olympian who can make an immediate name for himself in the UFC with a win over the former champ. In fact, “DC” called for Mir, something the Las Vegan doesn’t take offense with.

“I take it as a compliment,” he said. “No one’s calling out a small fry. They don’t want to take on an easy challenge because there’s no reward in it. And I think Daniel’s very smart in calling me out because it’s a no lose situation for him. He goes out there and loses, he still has the 205 weight class thing that he’s already put in people’s minds, and he lost to me. He won’t be the first guy that I’ve caught and submitted in the Octagon. So he can say, ‘well, it’s Frank Mir, he’s a top guy.’ As long as he has a solid showing, his stock still moves up. And there’s nothing but upside if he does win the fight because he’s won against somebody reputable and has people watching. Where if he goes and takes a fight against somebody who’s relatively unknown, it’s a huge risk. If he loses he’s stepping his career backwards because he’s expected to be better than that, and if he wins, no one cares. It’s like his last opponent (Dion Staring); I don’t think the win did anything for him.”

So what’s the reward for Frank Mir?

“He still has a lot of hype going behind him,” said Mir of Cormier. “He’s a great wrestler, comes from a good camp, and I think by having a win over him, it still moves me forward in my career. Maybe not as much so as a bigger name guy, but still, it’s a win in the UFC against a guy that most hardcore fans know as a very reputable heavyweight.”