The Ultimate Fighter Season 9 Contestant Frank Lester's Wager To Knock Teeth Out During The Show May Have Cost Him.
By Walker Van Wey • Jun. 9, 2021

Aggression, karma and irony all came together and resulted in the most ironic moment in The Ultimate Fighter history.

TUF 9 welterweight Frank Lester had specific animosity for his “traitor” opponent, James Wilks, ahead of their second-round matchup. After an entertaining montage of his rage and shadow boxing tailored to fit Wilks’ face, Lester sat in the van with the other U.S. welterweights on the way home from the gym when a particularly aggressive wager was placed.

For every one of Wilks’ teeth Lester were to knock out, teammate Demarques Johnson would give him $100.

The proposition was so well received other castmates were concerned Lester would be too enthusiastic and had to clarify, the teeth could only be knocked out inside the cage.

Fight day came around and Lester was still being reminded of the bet in one van and Wilks was laughing and envisioning a carrot cake dessert for himself post-fight. Little did he know Lester had one thing in mind - becoming a much richer man.

Well, as Happy Gilmore once said, “Talk about your all-time backfires.”

“It’s kind of one of the cruel paradoxes of our sport, I guess,” Johnson said. “It’s definitely a weird karmic thing.”

Between the first and second round Lester infuriated Team UK coach Michael Bisping when he was granted extra time before beginning the round. While Bisping was yelling at referee Steve Mazzagatti, Lester was spitting out his own fake teeth as well as pulling them out of his mouthpiece. 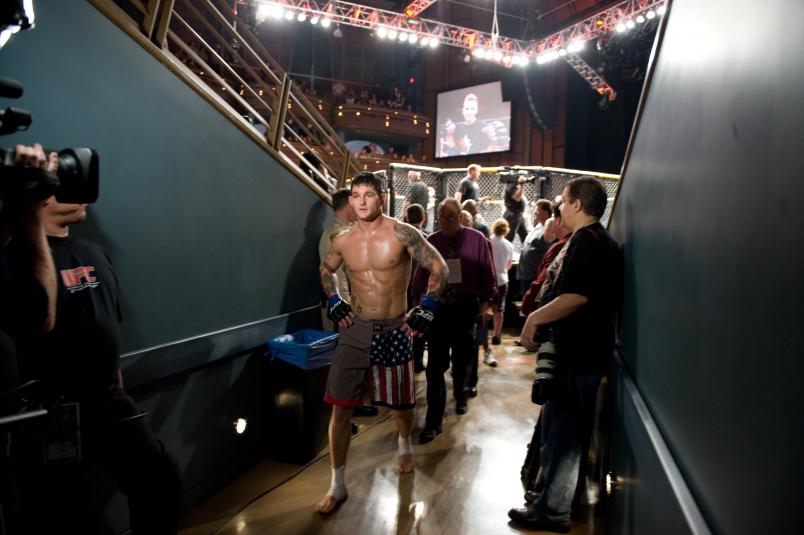 Frank Lester during The Ultimate Fighter 9 Finale at The Pearl at the Palms on June 20, 2009 in Las Vegas, Nevada. (Photo by Josh Hedges/Zuffa LLC)

“I mean, they were, I want to say, they were the caps to his teeth or something,” Johnson recalls. “I didn’t know he had fake teeth before that fight, but it looked f****** horrible on TV.”

Lester would go on to lose the bout and be eliminated from the tournament. To make matters worse, he never fought for a major organization following a loss on the TUF Finale card to Nick Osipczak. While there are many fights under his belt that could have erased the embarrassment of that one moment, Lester’s inability to escape the regional scene may have sealed his fate to the masses.

Impossible to ignore the irony of it all, Johnson learned his lesson about making similar bets, as karma is just too powerful. Hopefully so did Lester.

Re-live all of TUF 9 by signing up TODAY for UFC FIGHT PASS!