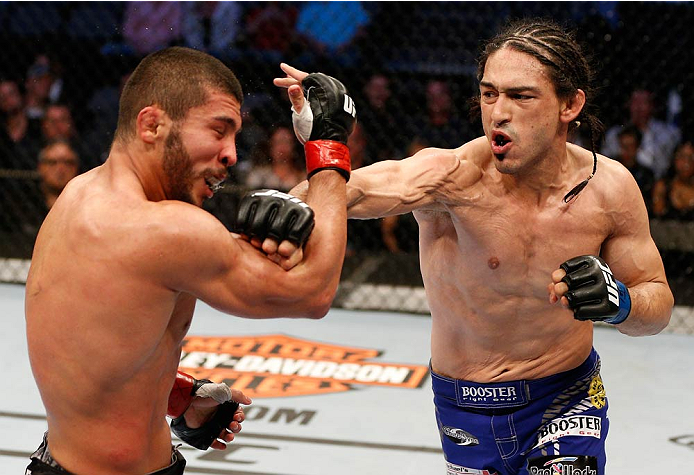 Fighting may be the toughest job in the world, but Francisco Trevino seems to be doing pretty well at it as a UFC lightweight with an unbeaten 12-0 record. Yet as his Saturday bout against Johnny Case in Mexico City approaches, it’s not the hard training sessions or the weight cut that have “Sitkayan” stressing out a bit. It’s something different than that.

“I can’t eat any of the food here,” he laughs. “So it’s a little hard when you see a whole bunch of tacos everywhere.”

Trevino, 33, knows what it’s like to chow down like a pro, having once clocked in at 267 pounds, and no, that’s not a typo. 2-6-7. That was nearly ten years ago though, right when he began studying Muay Thai in his adopted home state of Texas.

From there, the weight began falling off, and as he turned to fighting and made his debut in 2008, he made his way down the weight classes, everywhere from light heavyweight to his current home at 155 pounds.

“It’s finding your home and the right weight for you to be dominant in,” he said. “You don’t want to be the short guy looking up at the tall guy all the time. (Laughs) I was 5-9 fighting guys that were 6-5.”

Case, at 5-10, is a much better fit for Trevino, who was originally scheduled to face “Hollywood” on January’s UFC Fight Night card in Boston before a rib injury forced McAllen’s Trevino to the sidelines.

The injury was the latest setback for Trevino, who has yet to capitalize on his debut UFC win over Renee Forte in March of 2014. First was a torn meniscus that forced him out of a fight last year in San Antonio against Joe Ellenberger, an injury that prompted surgery and a long layoff.

“I was really, really frustrated,” he said. “It took me about six, seven months until I was able to feel good with my knee again and then I got the call for Johnny Case in Boston, and I was really looking forward to that fight. I was training hard for it and doing everything I could but then I injured my ribs.”

With six weeks left before the fight, doctors told Trevino he would have to sit out for four weeks. The Texan knew he wouldn’t have enough time to prepare and make weight, so he pulled out of the bout.

“I opted to give this guy (Case) a chance to fight another opponent, as opposed to me showing up and not being able to fight, and instead of him being grateful, he starts talking s**t,” Trevino said. “So I’m really looking forward to this fight and putting my fist in his mouth, so we’ll see how it goes.”

It’s not what Trevino expected after winning his Octagon debut, but after some dark days, he found his way back and got down to business once more.

“I did go through a little bit of a slump to where I was really depressed and really didn’t want to do anything,” he said. “I gained a lot of weight afterwards too, and I wasn’t able to train or do anything with my guys and put myself in a position to where I could fight again. So I was really frustrated. Everything and anything that could happen to me did happen to me, but the only thing you can do is move forward and try to shake it off and jump back on the horse.”

Given 12 weeks to prepare for the rescheduled bout with Case this weekend, Trevino couldn’t be in a better place, especially since he went over to Mexico City early to work with legendary boxing trainer Nacho Beristain as well as the respected Bonebreakers team. It’s not just an opportunity for him to get used to the high altitude, but to visit the country where he was born and that he lived in until he and his family moved to the United States when he was four years old. So while fighting again is a big deal, for the Reynosa native, fighting in Mexico is even bigger than that.

“It’s more than a big deal, it’s an honor,” Trevino said. “It’s Mexico City, it’s the capital of Mexico, and it’s the heart of Mexico, so I’m excited to be here. It’s an overwhelming feeling at times, and I never dreamed I would be in Mexico City, especially not in the UFC, and especially not fighting. So this is more than a cultural experience; it’s also like a welcome home. I’m back in my home country.”

And ready to fight once more.