"To have heavy hands and to be a technical, accurate striker is a big advantage for me." - Francisco Rivera 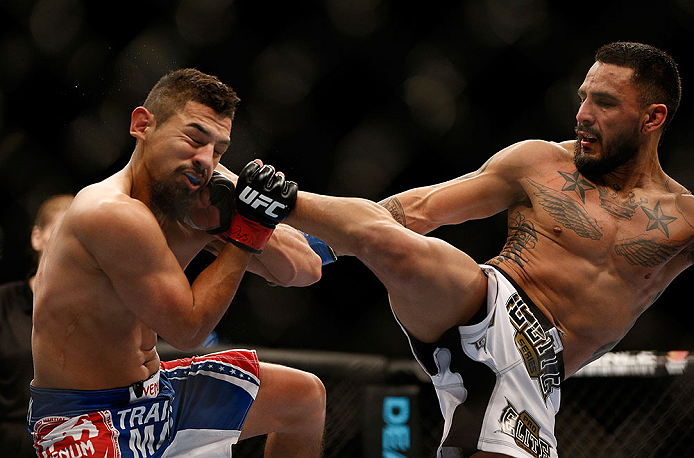 Whoever coined the misconception that lighter fighters can’t knock anyone out, they forgot to mention it to UFC bantamweight Francisco Rivera.

In 12 professional bouts, the Southern California native has dropped and stopped six of his opponents. First, that’s not a misprint. Second, it’s not done with flashy flying or spinning techniques; Rivera is clubbing opponents with blunt force punches like a heavyweight. “Cisco” believes this preternatural talent of putting his fellow 135-pounders to sleep revolves around a God-given ability being used with skillful precision.

“Some of it is technique, but most of it is probably being born with the gift of having heavy hands,” affirms Rivera. “I didn't really realize it until I started training and sparring. Everyone kept telling me I had heavy hands for my size. I didn't really believe it until my pro debut when I knocked the guy out in 50 seconds. In my second pro fight, I knocked the guy out in 40 seconds. I knew I had those heavy hands after those two fights, so I had to just make sure they were technical. To have heavy hands and to be a technical, accurate striker is a big advantage for me. Especially in the UFC, with the caliber of fighters who can take more punches and absorb more punches. Now, it's just the right accuracy along with the power that it gives me the advantage when I fight.”

At 32 years old with a 9-2, 1 NC pro career littered with kncokout finishes, Rivera is undefeated in his last five fights, including three incredibly one-sided Octagon appearances. A natural three sport athlete - track, baseball, and football - who played the latter as a cornerback and wide receiver from age seven until he broke his ankle playing at Orange Coast College, Rivera got a late jump into kickboxing and Brazilian jiu-jitsu at 24 years old, but picked them up quickly and soon enough was gathering up Ws. At UFC 156, “Cisco” was poised to keep his winning streak alive against a known durable adversary in Edwin Figueroa.

“I knew Edwin was tough,” tells Rivera. “He's a Hispanic fighter and, us Hispanic fighters always bring it, as you can see in the Gilbert Melendez vs. Diego Sanchez fight. I knew he was going to bring it, so I had to train hard for him. I didn't underestimate him coming into the fight. After my first time getting cut from the UFC, I knew I had to keep the win streak going. I trained hard for the fight and it was a battle. It was what I expected, fireworks. Thank God, I got the second round knockout.”

Fireworks, indeed. With less than a minute left in the second stanza, “Cisco” caught Figueroa with a right to the temple, which dazed “El Feroz” and sent him into survival mode. As Rivera poured on the punches, Figueroa made an escape attempt, but Rivera tracked his foe down, landed two more rights that dropped Figueroa, and brought an end to the bout. The stoppage marked the second in back-to-back fights for Rivera, with the first being a short uppercut to Roland Delorme at UFC 149 (a result changed to a no contest when Rivera tested positive for a banned substance). The Figueroa finish was even more impressive considering Rivera didn’t train for the bout with his Muay Thai coach Master Eddie Cha.

“My Muay Thai coach broke his foot, so the whole camp I didn't have him,” says Rivera. “He was in a cast for about three months. I had to change my training and do more wrestling and jiu-jitsu. I still did my pad work, but it wasn't as difficult as it is with my Muay Thai coach now. He's back for this camp. I felt different for when I fought Roland Delorme than when I fought Edwin Figueroa. Having him back in my camp and healthy is a big difference. I think it's going to help me a great deal in this fight.”

If any of these knockouts or Rivera in general is news to you, “Cisco” doesn’t think you’re alone. Being ranked in the top 10 is a lot like making an all-star team in the NBA or MLB; half of it is what you do and the other half is how well you’re known. While Rivera has emphatically dispatched the three who have faced him inside the Octagon, two were curtain-jerkers, aka the opening bout of the event, not the televised portion. Originally, Rivera was in an online prelim spot on UFC 166, but has been shifted to a televised prelim on Fight for the Troops 3, where “Cisco” plans to make the most of this opportunity and score a knockout for the soldiers in attendance.

“When they told us they were going to move us, I knew it was going to be for a good reason,” tells Rivera. “Now, we're on a TV spot, so it's definitely the time for me to showcase my skills for the world. They haven't really shown my fights. A lot of people don't really recognize me yet because the UFC really hasn't shown my fights on TV yet. When people do see me fight, they're like, 'Wow. How come this guy isn't on TV?' I'm not going to lay-and-pray you. I'm going to stand there and you're going to knock me out or I'm going to knock you out. If you take me down, I'm going to get up and keep coming forward. That's how I've always been, growing up. If I get knocked down, I'm going to get up and keep going. Now, doing it for the troops, being on this card and fighting for our military is an honor and I love giving back to our military.”

Up next for Rivera is a striker’s showdown this Wednesday at Fort Campbell, Kentucky against 6’1” scrapper George Roop. The rangy roughneck from Tucson, Arizona is riding back-to-back wins over Reuben Duran and former WEC bantamweight champ Brian Bowles since returning to the 135-pound division earlier this year. A Zuffa veteran for sure, this matchup will mark Roop’s 13th in combined WEC and UFC cage appearances, as well as a stint on The Ultimate Fighter season 8, where he won a bout on the show with a broken hand. Probably the tallest fighter in the weight class, Roop likes to pick his opponents apart on the feet, but “Cisco” believes that will be play right into his own strength.

In preparation for Roop, Rivera is busy hitting mitts with the aforementioned Master Cha at All In MMA in Buena Park, California. For Rivera, what makes Cha’s Muay Thai work so different is the incorporation of a lot of footwork and being able to generate power while on the move and not simply when stationary. For the ground game, he makes the very short trip to Fullerton, where he trains at Erik Paulson’s Combat Submission Wrestling. On paper, the deciding factor of this fight will be Rivera’s ability to negotiate Roop’s height/reach and he says he’s a natural at that.

“I've always had really good head movement,” asserts Rivera. “I have a boxer’s head movement of getting under and around. To be able to do it in MMA, a lot of these guys just stand there and take the punches or the kicks and absorb them and guys like that have a harder time against taller guys and getting under them before they get away. I've always been a natural at moving out of the way, but stepping in and getting my head just a little out of the way. I've been doing it in training like crazy and it's been working for me. I've been going with guys who are 6'1" or 6'2" and they're telling me it's crazy how I get inside and counter his punches or get in off the head movement and get under a jab or a right hand. I'm definitely going to use what I know in training against George Roop's lengthy punches and kicks.”

This Wednesday, bantamweights will brawl as Rivera takes aim at Roop. “I'm definitely going to take my time, make him swing and miss, and counter,” claims Rivera, who won’t waste the opportunity of TV time or to finish as “Cisco” looks to make a knockout statement. “I'm not going to force the finish, but as long as I'm technical and accurate, it's going to come. One mistake by him, he's definitely going to pay for it.”