The key question surrounding this weekend’s heavyweight championship rematch at UFC 260 is akin to the old philosophical thought experiment about a tree falling in the woods when there is no one around to hear it.

When Francis Ngannou met Stipe Miocic for the first time at UFC 220, he was pegged as a “one in a million” talent, entering as the betting favorite and forecasted by many to continue dispatching opponents with relative ease. It didn’t matter that he only had a dozen fights to his name and had never been out of the second round because did you see the way he lifted Alistair Overeem off his feet with that uppercut six weeks earlier in Detroit?

But not Miocic, and the reigning, defending, underdog champion walked into the Octagon and used the full array of his skill set to frustrate and tire and ultimately defeat Ngannou, wrestling the hulking contender to the canvas multiple times over, nullifying his power and breaking his will.

As they ready to run it back this weekend at UFC 260, the questions center on Ngannou’s wrestling, specifically his takedown defense, which will need to be substantially better than it was during their first meeting. The reason it feels like that thought experiment is because since that fateful, embarrassing night in Boston and his disappointing follow-up loss to Derrick Lewis, Ngannou hasn’t given anyone a chance to test his takedown defense. 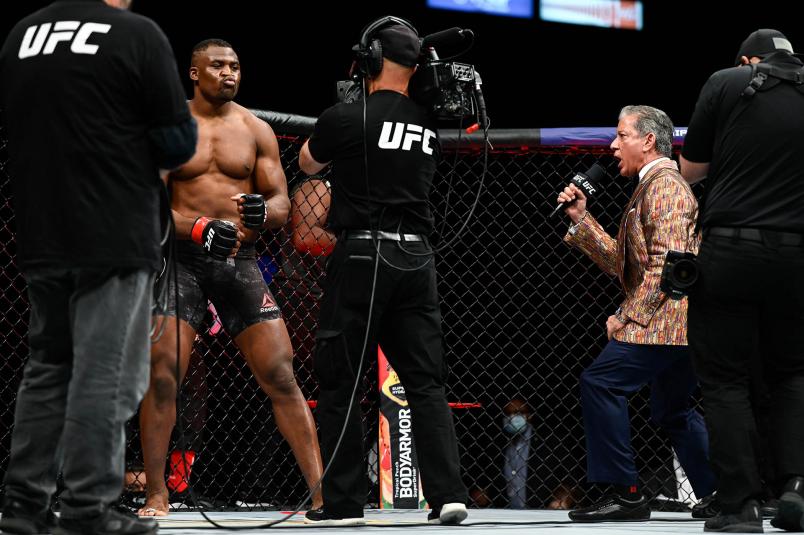 Francis Ngannou awaits the start of the match against Jair Rozenstruik (not pictured) of Suriname in their Heavyweight fight during UFC 249 at VyStar Veterans Memorial Arena on May 9, 2020 in Jacksonville, FL (Photo by Douglas P. DeFelice/Getty Images)

The calm before the storm, May 9, 2020 in Jacksonville, Florida. (Photo by Douglas P. DeFelice/Getty Images)

“We can talk about it until we’re blue in the face,” began Eric Nicksick, Ngannou’s head coach and chief corner, who has been working with this weekend’s title challenger over his last several fights. “People are going to doubt it, people are going to say, ‘Well we haven’t seen it yet’ and I’m from that same school of ‘don’t tell me, show me,’ but to our good fortune, we haven’t had to show it yet because he’s been putting people out and that could easily happen.”

“Putting people out” doesn’t quite paint the complete picture of what Ngannou has managed over his last four fights; it undersells the path of destruction he’s carved to arrive back in a position to challenge for championship gold again this weekend.

How To Watch UFC 260: Miocic Vs Ngannou 2 In Your Country

It’s hard to show people how much your takedown defense and overall wrestling has improved when you’re giving them no chance to wrestle.

“Are we saying, ‘He’s going to go out and stuff every takedown and do this and do that’? I won’t say that either,” continued Nicksick. “I just know that he’s been putting in the work, putting in the right time to help get himself better as an overall mixed martial artist and I’m happy of where we’re at in the progression.”

His charge is approaching things the same way.

“Obviously we have a game plan for Stipe, but for the past two years, I’ve been working not just for Stipe, but for any other challenge that could come my way,” said Ngannou, expanding on a question about his preparedness for what is likely to come this weekend in Las Vegas and making it about more than just Saturday’s rematch. “In order to be ready for that, I have to do anything I can in my power in terms of training and trying to improve in any area of the fighting game.

“I wouldn’t say specifically for Stipe — I’m doing things to improve my game, which includes building good skills to fight a guy like Stipe. Remember, after Stipe, that is not the end — there is always a challenge coming your way all the time.”

Though he looks the part of a menacing destroyer of worlds, Ngannou is actually a quiet man who picks his words carefully.

He speaks softly, his English tinged with a French lilt; his self-consciousness about the language still evident in his measured delivery and the way he shifts in his seat when he doesn’t have the right words to express himself at his disposal.

But when he does speak, Ngannou is direct and honest, seemingly unencumbered by the pride and shame and fear of judgment that prevents so many of us from uttering the truth and understanding that showing vulnerability isn’t a sign of weakness, but rather a sign of strength.

After his highly anticipated clash with fellow atom-smasher Derrick Lewis turned into a 15-minute staring contest that left everyone feeling unsatisfied, Ngannou took to Instagram and apologized, acknowledging that he carried the fears created in his loss to Miocic into the Octagon with him that evening at UFC 226.

He empathized with everyone that was disappointed, took ownership for creating those feelings, and vowed to never let it happen again.

Thus far, he’s been true to his word, but it’s that willingness and readiness to look inward and seek solutions that really stands out to his coach.

“The biggest thing as a coach and a friend is Francis’ self-accountability,” began Nicksick, who has been at the helm of Xtreme Couture’s return to prominence over the last few years. “He didn’t say, ‘This is why I lost’ and finger-point — he’s accountable in his regard knowing, ‘I didn’t do these things correctly. I need to get better in these areas. Will you help me?’ That’s a refreshing mentality for a coach seeing this guy is hat in hand and wants to get better, no matter the outcome. How can you ever get mad at a guy like that?

“I don’t think he should have been a champion back then,” Nicksick added. “I don’t think the timing was right for him then. I think he needed to hit a little adversity, figure out who and what he needed to become, and this is now the byproduct of that.”

Ngannou’s introspection doesn’t end at analyzing his losses and adjusting from setbacks; it’s a total life approach that allows him to put everything into greater context and take a wide-angle view of things. 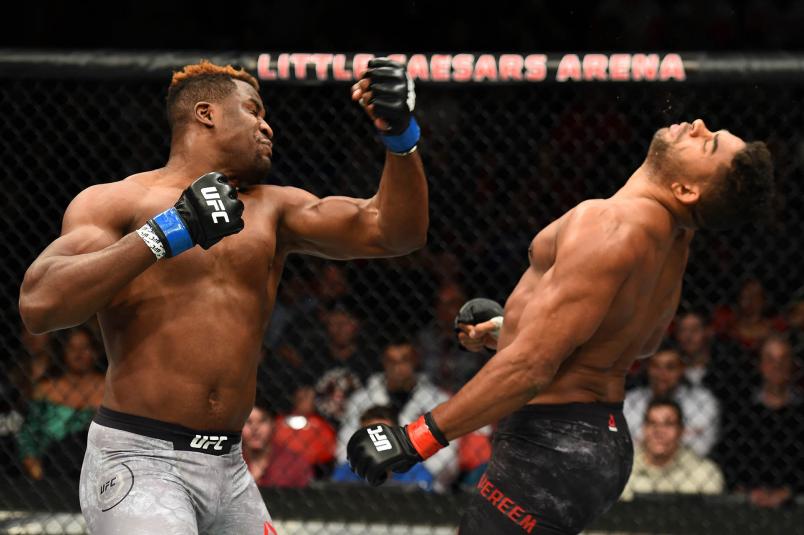 Rather than get hung up on the specifics on his loss to Miocic and treat it like a single, isolated incident, the 34-year-old from Cameroon instead looks at everything that led up to that moment, recognizing that every piece of the puzzle contributed to the final picture, acknowledging the difficulties he had with the new obligations and expectations that came with being a rising star and the center of a heavyweight championship fight.

“When I got to the title fight, I got a different approach and that was due to the pressure that I had,” said Ngannou, who went from never headlining a UFC event to being seen as the champion-in-waiting, with UFC 220 simply being the night he made things official. “I approached that fight differently; it wasn’t me. I was going there to smash him like he was nobody and I never approached a fight like that; I was always very careful when I was approaching a fight, but that one, I wasn’t.

How To Watch UFC 260: Miocic Vs Ngannou 2 In Your Country

“When I look back at it, I feel upset, mad at myself that I didn’t do things differently,” he added. “Maybe it would have played out differently if I had a good approach, but in another way, this was something that was meant to happen at some point in my career because I didn’t have as much experience; I was still very new in the sport.”

It’s funny to see how perceptions and narratives change following a fight like that, as pieces of information and talking points that were so prevalent and integral to the story of Ngannou’s rise were quickly discarded in favor of sharp criticisms surrounding his approach, his attitude, and his lack of preparedness to compete against the absolute best the heavyweight division had to offer.

Those criticisms were only magnified following the loss to Lewis, yet as he’s rebounded and embarked on the remarkable streak that carries him into Saturday’s second meeting with Miocic, those key elements that made his initial ascent so special have largely remained buried.

But Ngannou and Nicksick each see those foundational pieces of his sharp, sudden rise through the ranks playing a big part in how things play out the second time around this weekend.

“I have changed a lot because the time between my first fight and my second fight is almost the time that I had been doing the sport before my first fight,” said Ngannou, who had been a professional for a little over four years when he first fought Miocic four years ago in Boston. “If you think about it, I’m almost twice what I was back then skill-wise, experience-wise; even more because there were a lot of things that I had never been through before that fight that I didn’t understand how it works.”

“I think his Fight IQ has grown to the point now where he’s starting to like the other elements of MMA, including the wrestling, the grappling, and the jiu-jitsu, and that helps a lot because it’s like you’re giving an artist more paint to paint with,” offered Nicksick. “It’s also helped because he understood what some of his weaknesses were and instead of just doubling down on what his strengths are, we talk to him a lot about focusing on the things that you think you’re not good at yet.

“He feels like a different animal now that he has these other tools that he can work with, play with.”

In a sport where nearly all of the greatest competitors of all-time have dealt with setbacks inside the cage, the way Ngannou was quickly dismissed following a pair of losses after being christened “The Next Big Thing” has always felt like a gross overreaction.

Now, as he readies to face Miocic for a second time and potentially fulfill the destiny many forecasted for him several years ago, the challenger has proven himself to be much more adept at handling the sundry secondary and tertiary obligations and expectations that come with being in his position, just like many who followed a comparable path before him.

And when it comes to Saturday night, he’s not worried about answering lingering philosophical thought experiments about his takedown defense — his sole focus is on exiting the Octagon with the heavyweight title draped over his shoulder.

“As long as my hand is raised, that will be a good fight for me. The only thing I want to see is my hand raised.

“On March 27, I’m going to become the heavyweight champion.”