Good Pressure For The Predator

After two consecutive losses, Francis Ngannou is determined to get back on track.
By E. Spencer Kyte • Nov. 21, 2018

While his last two appearances in the Octagon cast a blinding spotlight on the areas Francis Ngannou needs to improve, the five months since his loss to Derrick Lewis at UFC 226 in Las Vegas has also put the depth of the heavyweight contender’s character on full display as well. 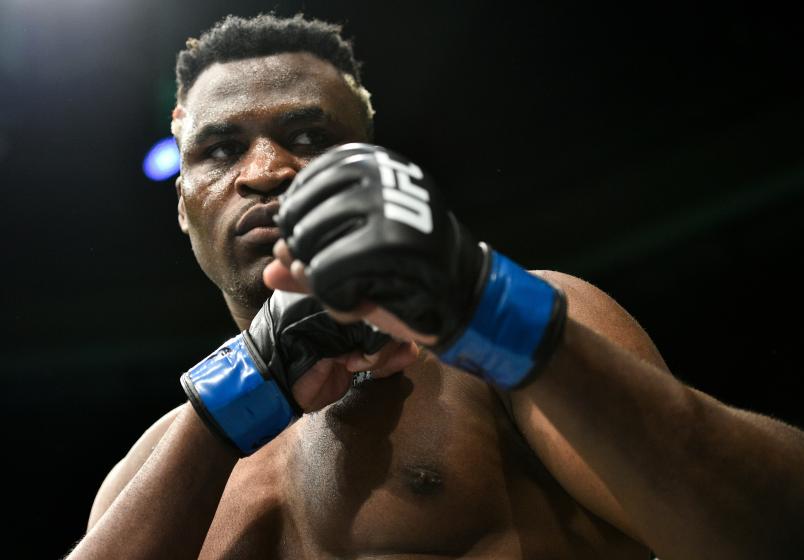 BOSTON, MA - JANUARY 20: Francis Ngannou of Cameroon enters the Octagon before facing Stipe Miocic in their heavyweight championship bout during the UFC 220 event at TD Garden on January 20, 2018 in Boston, Massachusetts. (Photo by Brandon Magnus/Zuffa LLC via Getty Images)

Coming off a disappointing showing in his championship clash with Stipe Miocic at the start of the year, many anticipated that Ngannou and Lewis would set T-Mobile Arena ablaze in July, squaring off in a firefight between two punishing knockout artists who got a little frisky with each other at the ceremonial weigh-ins the night before the fight.

Instead, the explosive pairing fizzled, as Lewis was limited by the persistent back issues that have plagued him throughout his career and Ngannou was crippled by anxiety, his lopsided loss to Miocic still playing over in his head, leaving him unable to muster much offense.

As soon as the bout was over, Ngannou opened up about his struggles, offering an explanation for his poor performance that stretched well beyond the usual post-fight platitudes we hear from beaten fighters. Rather than a simple, “He was the better man tonight,” the Cameroonian contender took to Instagram and stated that he had “carried (his) fear from the last fight to this one,” apologizing to his supporters, promising not to let them down again and vowing to “prove myself and make you proud again.”

His first opportunity to make good on that pledge comes this weekend, as Ngannou ventures to Beijing, China to square off with Curtis Blaydes in the main event of the UFC’s initial fight card in the Chinese capital.

In addition to being a clash between top contenders in the heavyweight division, it is a sequel, as the talented tandem clashed more than two years ago when Ngannou was making his sophomore appearance in the Octagon and Blaydes was making the walk to the UFC Octagon for the first time.

“The Predator” came away with a stoppage victory between the second and third rounds that night in Zagreb, Croatia, but he has no intention of letting the fact that he already holds a win over the surging Elevation Fight Team member influence how he approaches things when the two run it back this weekend.

While that could be taken as fighter-speak — the right thing to say when preparing to face an opponent you’ve already beaten once before, rather handily at that — when taken in conjunction with his openness following his loss to Lewis and overall earnest assessment of what has been a challenging year, it’s clear that Ngannou isn’t just going through the motions and saying what needs to be said.

Coming off a devastating knockout win over Alistair Overeem at the end of 2017 and heralded as the next big thing in the heavyweight division heading into his showdown with Miocic in Boston, the first six months of 2018 brought nothing to struggles for the Paris-based fighter.

“Well, I think this year was tough and a learning process,” said Ngannou. “As I said before, after the Stipe fight, it was longer than my whole career in MMA. I learned a lot and it was hard — the process was hard — but when I come out of this, I will be a different fighter; a very, very dangerous fighter.

“Even after (my fight with Derrick Lewis), I thought about it and I worked on many aspects. Going this Saturday, I don’t have space to think about last fight or the next fight. I had enough time to be down. I fell and I was at the bottom, so now I’m really going to (not let that creep back into my mind).”

Eager to snap out of the ugly two-fight skid that has garnered a tremendous amount of attention, Ngannou admitted that he feels pressure heading into this weekend’s showdown with Blaydes, but acknowledged how that is very different than his previous two appearances this year and ultimately a good thing in his mind.

“I always felt pressure and then when I didn’t feel any pressure, it didn’t go well,” laughed Ngannou. “Pressure, in fact, is a good thing, so yes, I feel pressure.” 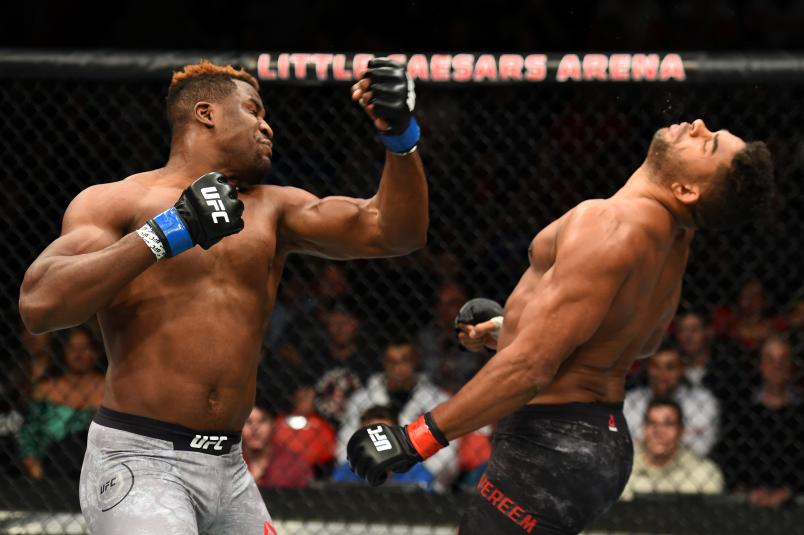 DETROIT, MI - DECEMBER 02:  (L-R) Francis Ngannou of Cameroon punches Alistair Overeem of The Netherlands in their heavyweight bout during the UFC 218 event inside Little Caesars Arena on December 02, 2017 in Detroit, Michigan. (Photo by Josh Hedges/Zuffa LLC via Getty Images)

And just as he refuses to make the mistake of overlooking Blaydes because he’s already beaten him in the past, the returning former title challenger will not replicate the errors he committed in his bout with Miocic, either.

Rather than heading into battle with an outcome in mind and tunnel vision to end the fight with a highlight reel knockout, the reflective, developing contender wants to let the fight come to him and find a finish organically.

But he is planning on getting the finish.

“For the Stipe fight, I went there like, ‘Okay — I’m going to go out there for the knockout,’ which is something that I never plan,” he said. “I never thought about it and then once I went there with the intention of getting the knockout, I did things very wrong. So I will fight naturally and just be ready for any type of situation.

“As we all know, this guy is a wrestler and he’s going to try to take me down, so that is why my prediction on this fight is 60-percent submission, 30-percent knockout and maybe 10-percent chance for a decision.