Francis Carmont: The Time is Right

"I came a very long way to get to where I am, and now I’m very happy." - Francis Carmont 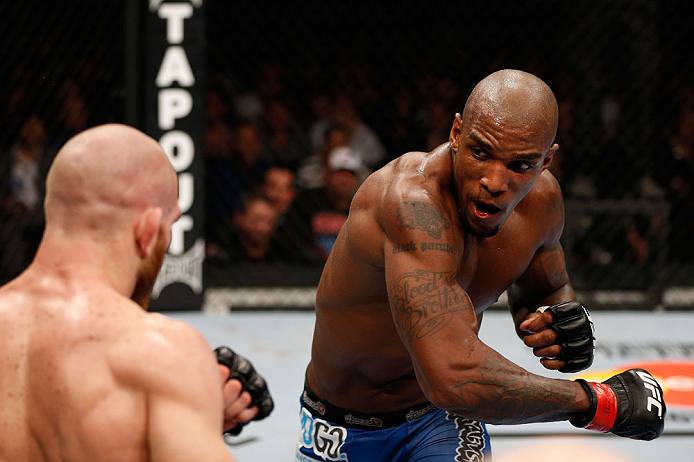 The blessing or the curse of mixed martial arts - depending on which side of the win-loss equation you’re standing on - is that there are no shortcuts. Unless you are fortunate enough to leave the Octagon with a 30 second knockout or submission, what you did in training will show up on fight night. And when it does, all the talent in the world won’t save you if you didn’t train for a 15 or 25 minute fight.

Francis Carmont found that out the hard way back when he was alternately dazzling and disappointing people with erratic performances that displayed flashes of brilliance as well as a fighter who often didn’t have the gas tank to finish strong. For the Paris native, who was a lot better than the 11-7 record he started out with, there was clearly something missing.

“A couple times I would win, a couple times I lose, and I would come to a fight not in good shape and with less cardio,” he said of the years before he filled in the missing piece of his fighting puzzle by moving to Montreal, home of the Tristar Gym and some of the top coaches and fighters in the sport. For Carmont, things made a 180 degree turn almost immediately.

“When I came to Montreal for training, it was a big change for me,” he said. “These guys – Georges (St-Pierre), David Loiseau, (Ivan) Menjivar – have a lot of experience, and they knew what to do to have good training and how to be better. Now it’s completely different. When I come to fight I’m in good shape, I have good training, and that’s it.”

“You can see when I left Europe, my results are not the same,” he laughs, a testament not just to his talent, but his training situation, which has helped him realize that the adage that “if the training’s hard, the fight is easy,” is no old wives’ tale.

This Saturday in Toronto, “Limitless” will bring a ten-fight winning streak into the Octagon against Costa Philippou. It’s a graduation day of sorts for Carmont, with a win establishing him as a legitimate middleweight contender in the UFC. Since his first Octagon bout in 2011, he’s turned back Chris Camozzi, Magnus Cedenblad, Karlos Vemola, Tom Lawlor, and Lorenz Larkin, with some bouts more impressive than others, but all wins. It’s been a life-changing run to say the least, even if he’s not a household name like some of his Tristar peers like GSP and Rory MacDonald yet.

“To come to the UFC and fight in the big events is different and it’s changed a lot for me,” he said. “Now, people know who I am, and all fighters want to fight with the best in the UFC, and now I fight with the best. It’s a big positive change for me.”

The biggest positive might be that as he’s worked his way to this main card bout at UFC 165, he’s done so at a steady pace, and with the experience he’s gained, at 31 there may not be a better time for him to make his move.

“When I came to the UFC I had a lot of experience,” he said. “I fought in Europe and in a lot of countries and that gave me a lot of experience with different shows and for sure it was better for me. When you come to the UFC and you’re a young guy, it’s good, but when you don’t have the experience, it’s not good. I came a very long way to get to where I am, and now I’m very happy.”

And very ready for Philippou.

“When he comes to fight, he’s ready to die in the Octagon,” said Carmont of his opponent. “He’s hard to take down, and he’s a top contender. It’s a hard fight for me, but I believe I am better and will be able to win this fight. And if I beat Costa Philippou, I want to fight a top guy in the division, but now I’m concentrating on Philippou, and after this fight I can ask for one of the top five contenders.”