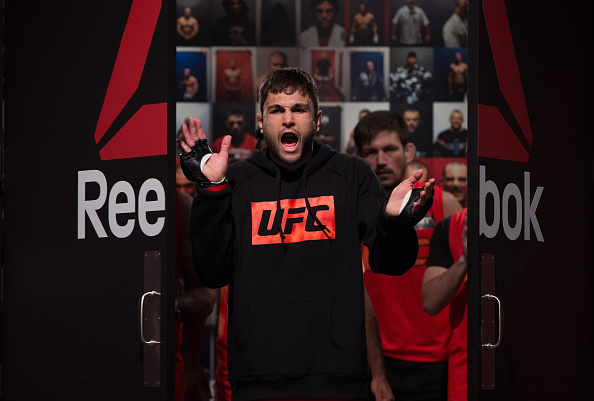 Many alumni of The Ultimate Fighter reality series say that the biggest thing you learn during your six weeks away from the outside world is whether fighting professionally is something you truly want to devote your life to. Lightweight Glaico Franca, Team Shogun’s representative in Saturday’s TUF Brazil 4 final against Fernando Bruno, learned something else.

“That I have no limits,” he said through translator / coach Marcelo Brigadeiro. “I can do whatever I want to.”

That’s a powerful feeling to have, and considering that he submitted each of his foes on the show – Raush Manfio, Nikolas Motta, and Joaquim Silva – it’s understandable. Simply put, to make it through a competition like that while separated from family and friends and also living with 15 other fighters is an accomplishment only a small number of competitors have been able to claim over the last decade, and “Nego” is one of them. Not surprisingly, he left Las Vegas with a good feeling about his time on the show.

“Being away from my family and from my team was tough,” he said. “But it was a great experience, my biggest dream coming true.”

This weekend in Rio de Janeiro, a new dream begins, one where he becomes Brazil’s latest Ultimate Fighter, earns a UFC contract and carries on with his life in combat sports. It was a passion he began when he started studying judo at seven, and he’s never stopped, becoming a luta livre purple belt and, since 2012, a professional mixed martial artist. And over the course of his three-plus years in the sport, he’s developed a reputation as someone who doesn’t like to stay around longer than he has to on fight night.

“I would say I am a well-rounded fighter who is always looking for a chance to finish the fight,” Franca, who has ended 12 of his 13 wins before the final bell, said. As for that ability to finish fights, he said, “I think it’s due to my technique. I train a lot of Luta Livre with my coach Marcelo Brigadeiro, and my team, Astra Fight Team, is known for having one of the best grappling teams in the world, so I am very confident in my ground game.”

He’ll need to be against Bruno, a Nova Uniao representative who has finished nine of his 16 pro victories by submission. But for the 24-year-old Santa Catarina native, who is the youngest of the four TUF Brazil 4 finalists, confidence has never been an issue, and it won’t be this weekend in Rio de Janeiro.

“This is a chance to get onto the biggest stage on the planet, the UFC,” Franca said.  “It will change my life because I will win it (the TUF Brazil 4 title). And it will be the best thing ever because I will be where I deserve to be, in the UFC.”