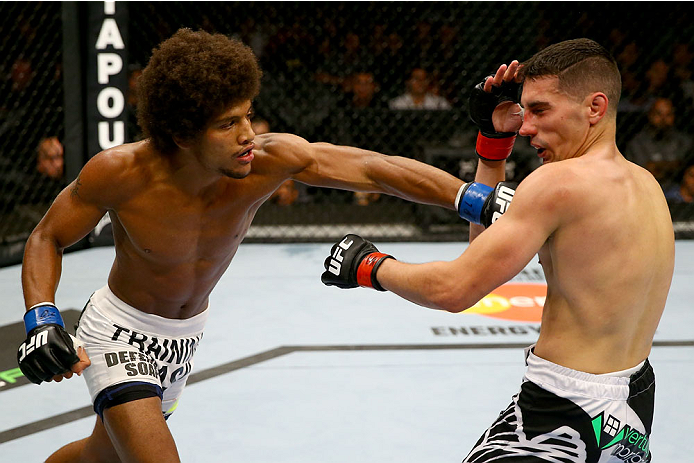 The UFC descends upon the Windy City of Chicago this weekend, and the undercard for the upcoming event is loaded with young, up and coming talent, including a featured bout pitting UFC lightweight champion Anthony Pettis' little brother Sergio Pettis against Alex “Bruce Leroy” Caceres, as well as two of the best strikers in the bantamweight division when Eddie Wineland takes on Yves Jabouin.

In today's fantasy preview we will examine some of the key fights on the undercard and see who has the best chance of leaving the cold streets of Chicago with a blistering hot win.

Sergio Pettis has a heap of expectations on his shoulders, not only because his older brother is the best lightweight in the world, but because he's been touted for quite some time already as one of the best prospects in all of MMA.  Pettis is very much like his brother when it comes to dynamic athleticism inside the cage and he can be creative as well, with a mix of punches and kicks that can give any opponent a headache.

Alex Caceres is no pushover, and his improved standup could give Pettis troubles if he's not careful on Saturday night.  Caceres was primarily known as a submission specialist early in his UFC career, but he's developed a much more well-rounded game as of late.

Where Pettis has to be careful is in the exchanges with Caceres, so he doesn’t give up takedowns like he did in his last fight against Will Campuzano.  Maybe his first fight was just Pettis' way of getting rid of those notorious Octagon jitters, so with the butterflies gone from his stomach, we should expect a stronger performance this time around.  Pettis is fast and lightning quick with his strikes, especially when he moves in and out.  Caceres may catch two or three punches while trying to grab a hold of Pettis, and that could spell disaster on the judges' scorecards.

Look for Pettis to stick and move with combinations landing throughout all 15 minutes while avoiding Caceres' best takedown attempts.  In the end, it should spell a unanimous decision victory for Sergio Pettis.

Get ready for a fun striking battle between two of the best in the bantamweight division when Eddie Wineland throws down with Yves Jabouin.

Wineland is coming off a loss in his last fight against champion Renan Barao, but if you look at his record there is one noticeable similarity with anyone that's beaten him in the UFC - they are a champion, former champion or former title contender.  Wineland doesn't lose to many opponents, but when he does, they are only from the upper echelon of the division.

Yves Jabouin is a tough opponent with a solid array of creative strikes, but he's going to face a bull when he takes on Wineland this Saturday night.

Wineland has crushing power in his hands both on the feet and on the ground.  He's devastating in close, which is where Jabouin does not want to be in this fight. The Canadian would do well to stay on the outside and try to use his kicks to hit Wineland before his fists connect on the jaw.  The last time Wineland tasted defeat in the Octagon, he returned to blast Scott Jorgensen out of the cage with one of the nastiest knockouts in all of 2012.  If he returns with the same kind of vigor following his most recent loss, Jabouin could be going home with a loss and a big knot on his head courtesy of Wineland's fists.

Chico Camus and Yaotzin Meza will both look to build on recent wins when they meet up in Chicago in a bantamweight contest.

Camus is an exciting prospect in the division who rarely slows down at any point in his fights, armed with a solid arsenal of both striking and submission skills.  Meza is equally dangerous with his technique so this one has Fight of the Night type of potential.

For Camus to win, he needs to slow things down enough to catch Meza sleeping on either a combination of punches or a submission on the mat. Camus is a fast fighter, but sometimes his tendency to push too much costs him in the fight. If Camus can control his aggression, but keep the offense on Meza at all times, this should be a win he can get on Saturday night.

Meza is a sizeable bantamweight so there's always a question of cardio, but he's shown great resiliency in past fights, so conditioning shouldn't be an issue.  Camus just has to wait for his openings and he can hurt Meza with his stand-up arsenal and maybe even mix in a takedown or two as well to keep his opponent guessing.

Chances are Camus won't get the finish here so this might be a close bout when it's all said and done, but given 15 minutes to get the job done, he should get the decision victory.

Two debuting fighters will try to impress the UFC matchmakers when George Sullivan meets Mike Rhodes on Saturday in Chicago.

If the name Mike “Biggie” Rhodes sounds familiar, it's probably because just a few short month ago when UFC lightweight champion Anthony Pettis was asked which of his teammates would soon join him in the Octagon to make an immediate impact, this is the fighter he talked about.  Rhodes is Pettis' roommate in Milwaukee and trains under the same coach and coaching staff at Roufusport.

Rhodes is a fun fighter to watch and he wastes no time letting opponents know who is in control of their matchup.  His only loss was to Brandon Thatch, who is already a serious prospect in his own right in the UFC.  Outside of that, Rhodes has been flawless while looking better with each performance. Sullivan, on the other hand, trains under former UFC veteran Kurt Pellegrino in New Jersey.  Sullivan is no slouch and actually holds a knockout victory over another former UFC fighter in Greg Soto.

Both fighters will have something to prove since this is their first test in the Octagon, but Rhodes should shine a little brighter.  He's well versed in all facets of the game, and mentally he's as strong as they come, having already fought on a large stage like Resurrection Fighting Alliance, and he has the wisdom and tutelage of Pettis in his corner.  This is Rhodes' coming out party, and if he performs up to his ability he might have one of the flashiest showcases of the entire card.