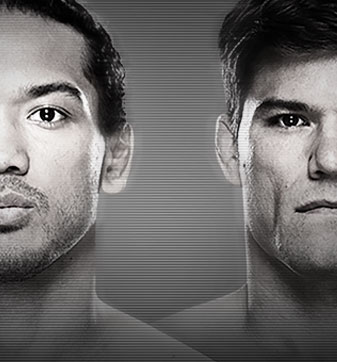 There will be a laundry list of top ten fighters on display when the UFC returns to Chicago on Saturday night for the latest installment of the FOX UFC Saturday series, this time showcasing former lightweight champion Benson Henderson in his first fight since dropping the title when he faces former Strikeforce king Josh Thomson.

In addition to the main event offering of Henderson vs. Thomson, the upcoming card will also feature an intriguing co-main event pitting Ohio's own Stipe Miocic against perennial contender Gabriel Gonzaga while Donald “Cowboy” Cerrone looks to build upon his last victory when he faces Brazilian prospect Adriano Martins.

In today's fantasy preview we are going to examine the main card, including the headline bouts, to see who has the advantage going into Saturday night and where there might be an interesting upset worth selecting.

Former UFC lightweight champion Benson Henderson will look to get back on the horse after his recent loss to Anthony Pettis when he faces veteran competitor Josh Thomson in the main event of Saturday's show.  Prior to the loss to Pettis, Henderson was riding a seven fight win streak, the second longest in UFC divisional history, and historically he's been one of the most well-rounded fighters in the entire weight class.

Statistically, Henderson is a beast across the board.  He outstrikes his opponents at a two to one ratio and has the fifth highest takedown accuracy in lightweight history.  The down side of those gaudy numbers is the fact that he has the second longest average fight time in UFC history, which means he has a tendency to get decisions, which can be good or bad, depending on the opponent he's facing.

This time around he's facing a veteran of five round fights in Josh Thomson, who has had a career resurgence since returning to the UFC last year.  Thomson is equally well-rounded, with great striking defense and an aggressive ground game where he lands takedowns at 75 percent accuracy and held the record for most submission attempts in Strikeforce history.  Thomson just knows how to win fights.  He's gone toe-to-toe with notably strong boxers like Nate Diaz, and he's had a famously fun trio of bouts against Gilbert Melendez as well.

The key to this fight is for Thomson to use his footwork and avoid Henderson's powerful kicks, which he uses regularly to punish an opponent to the body while simultaneously sucking away their oxygen reserves.  Thomson is smart enough and elusive enough to do it, but he has to stay consistent over all 25 minutes.  Thomson also has the ability to mix things up better than most of Henderson's recent opponents.  The former Strikeforce champion mixes in a battering attack on the feet before pushing in and grabbing a quick takedown to steal a round if necessary.

Henderson is the favorite here and on paper he should be the likely candidate to win, but Thomson has a way of sticking around fights and keeping things close.  If he can even things out through the first three or four rounds, look for Thomson to put his foot on the gas and steal the fifth round to get the victory.  It's going to be close, but Thomson has what it takes to get the win.

Don't expect the co-main event to go to a decision if either Stipe Miocic or Gabriel Gonzaga have anything to say about it.  In his 11 pro fights, Miocic has gone to decision only twice, while Gonzaga has only seen the judges' scorecards in one out of 17 fights inside the UFC.

Gonzaga has been a killer since returning to the UFC after a very brief retirement in 2010 and has gone 4-1 since coming back, with all four wins coming by knockout or submission within the first two rounds. He has the most finishes in UFC heavyweight history, which is coupled with the second most knockouts and second most submissions as well.  As good as Gonzaga can be on both the feet and on the ground, he has to be wary of the power Miocic possesses.

Miocic is a former Golden Gloves boxer who also competed at the NCAA level of wrestling while in college.  Since coming to the UFC, Miocic has only gotten better with his striking as well as his defense.  He lands almost five and a half significant strikes per minute, which is the second highest in the division behind champion Cain Velasquez.  He also possesses the fifth highest striking accuracy, so chances are if Miocic is throwing at you, he's going to land.

Therein lies the problem for Gonzaga, who hits like a truck, but has been knocked out on more than a few occasions.  He sometimes leaves himself open for a shot, which is why his striking defense is a full five points lower than Miocic heading into this fight. If he doesn't cover up when throwing punches against a great counterstriker like Miocic, he's going to wake up staring at the lights.  Miocic has good range and uses his reach extremely well to keep an opponent away from him.  Look for Miocic to bait Gonzaga in early, and once the Brazilian throws, he will unload with a counter.

It might only take one shot for this one to end, so look for Miocic to do his work early and go home without ever seeing the second round.

Donald “Cowboy” Cerrone looks to regain his reputation as the busiest fighter on the planet when he returns just over two months after his last fight, a submission win over Evan Dunham at UFC 167 in November.  Throughout his UFC career, Cerrone has been notorious for these kinds of fast turnarounds and usually it's worked out in his favor.

Cerrone is as tough as shoe leather when it comes to his fight style as well. He loves to march forward with strikes, and he has an especially nasty combination of kicks. Plus, he stops takedowns at almost 88 percent accuracy, so if he wants this fight standing, chances are he'll keep it there.  He's facing a relative unknown in this fight, but that could work against him given Adriano Martins' pedigree.

Martins is relatively new to most UFC fans, but don't be surprised by what this guy possesses inside the cage.  He's a big lightweight who cuts sheds a lot of pounds to make the 155-pound limit and he's only going to give up a little bit of reach to Cerrone, who is great at using his size against other fighters.  Martins is a powerhouse with his punches and he can dole out punishment that could stop any lightweight in the world.  Mix that in with a slick submission game, and Martins is quite dangerous.

Conventional wisdom is that Cerrone should be favored to win just based on experience alone.  He's faced and fought a who's who list of lightweights in the UFC and has wins over a bunch of them.  The X factor in this one, however, is how much Cerrone cared to look up about Martins before fighting him.  Martins may only have one UFC fight, but he's got a huge resume against top competitors in Brazil that should help him get ready to face a true stalwart of the lightweight division.  Cerrone is the safe bet if he shows up ready and sets the tone early with an aggressive striking onslaught.  That said, if you're looking for a sizeable upset, this could be the one.

Martins is strong, fast and shows no fear in his fights.  He's well-rounded and a huge competitor for 155 pounds.  If he can shake off the early attacks from Cerrone and land a few combinations of his own, it could be just the right recipe for a shocking conclusion on Saturday night.

It's a battle of the Midwest when Indiana native Darren Elkins takes on Iowa's own Jeremy Stephens in a featherweight fight between two competitors both trying to crack the top ten.

Elkins is a stifling wrestler with suffocating top control and the most submission attempts in UFC/WEC featherweight history.  He's also a hard-nosed striker on the mat, where he's landed an incredible 418 ground strikes, the most in UFC/WEC history as well.  If Elkins wants to win this fight, he needs to get this to the ground, because on the feet will be an unfriendly place to meet Stephens.

At lightweight, Stephens was already known as a knockout artist, with the fourth most KOs in history, but at 145 pounds he's turned into a new kind of animal.  Stephens dusted off Ultimate Fighter Brazil champion Rony Jason in just 40 seconds in his last bout with a vicious head kick and punches.  The thing that might be scariest about Stephens at featherweight is the fact that he's just as strong as he was at 155 pounds, but now he's not tentative at all like he was in fights against fellow strikers like Donald “Cowboy” Cerrone or Melvin Guillard.

Stephens can put anyone's lights out in the division, and he can do that to Elkins in this fight if he approaches the bout in a smart way.  Stephens has to know Elkins wants this fight on the ground, so he needs to employ better takedown defense than he's currently known to have (he blocks 54 percent of takedowns attempted) while still reeling off the kind of punches to back his opponent away.

Look for Stephens to time Elkins' takedowns with a vicious uppercut that he's perfected over the years.  Also, if Stephens shows up aggressive and immediately starts going after Elkins, he may never give the Indiana native a chance to breathe, and he could get another dominant knockout win to his credit.  Elkins can absolutely win this as well, but he needs to get this one to the ground within the first few minutes, and if he struggles to get Stephens down, watch as the former lightweight slugger's confidence swells with each passing minute of the fight.