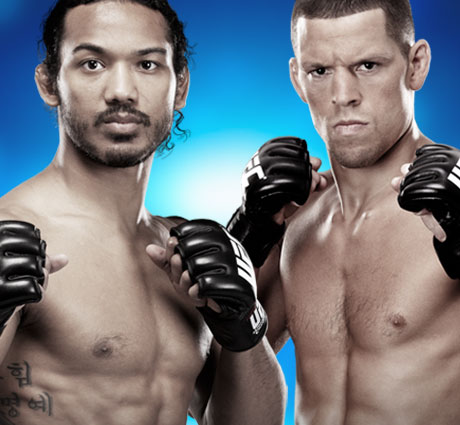 Traditionally, a one year anniversary present is paper, but UFC and FOX are giving us gold.

The mega-relationship that began on November 12th, 2011 with a one fight, main event heavyweight title bout between Junior dos Santos and Cain Velasquez will mark its first year with another belt on the line and much, much more. On December 8th, live on FOX from the KeyArena in Seattle, Washington, the ultimate proving grounds will feature a pair of fight finishing welterweights, the return of an MMA icon vs. a top tier talent in the making, a terrific tangle between light heavyweight titans, and the UFC lightweight championship up for grabs. As another year of fighting festivities winds down, the Octagon takes center-stage on FOX with easily its most high profile and stacked card.

“The idea is to put the best fights we could possibly put on on FOX,” states UFC President Dana White, aware that even a casual MMA fan knows that this card is simply just that: the best fights possible.

With only a little over a week away, most of the moving pieces of this historic, end-of-the-year FOX card took time out their busy training schedules on Tuesday to chat on a conference call with the ever-inquisitive MMA media. The cast of cagefighting characters included current lightweight king Henderson, Diaz, “Shogun”, Penn, MacDonald, UFC President White, and the President of FOX Sports Media Group Eric Shanks.

Surprisingly, much of the MMA media’s curiosity was not transfixed on the shimmering gold belt, but on the matchup between the old lion Penn and the young dragon MacDonald. One could see it as mild irony or self-fulfilling prophecy, as part of Penn’s reasoning for taking the fight with MacDonald was him not hearing his name mentioned enough by the media. The former UFC lightweight and welterweight champion has always been at the forefront of discussions concerning “pound for pound” or “best ever”, but the conversation has changed with the emergence of current champions who have also been more active like Anderson Silva, Georges St-Pierre, and Jon Jones. “The Prodigy” wants to again solidify his place on those lists with a return to form against MacDonald.

“No one says my name when they talk about the greatest fighters anymore,” tells Penn. “I told Dana I have a real problem with that. I want to come back strong. I'm a glass half empty kind of guy and I'm not happy with ‘he was good back in the day.’ I still think I have something left to accomplish.”

Just shy of 34 years old, Penn is coming off a near 14 month absence from the sport stemming from his Fight of the Night war with Nick Diaz at UFC 137, which ended with Penn declaring his retirement. “I got the itch that I wanted to fight again and I realized I can't do this forever, so I might as well make the most of it,” reveals Penn, whose brash and confident opponent lit a fire under the Hawaiian to take his belly off and drop from an admitted 40% body fat to under 10%. “As things started going on, he said he saw me, that I looked fat, and he would kill me in the ring. I love it when my opponent says that I'm fat or I'm nothing - it's wonderful; I couldn't ask for anything more.”

On the other side of this caged equation is the 23-year-old phenom MacDonald. With a professional record at 13-1, with his only loss coming via TKO in the waning seconds of a fight he was winning against former interim welterweight champion Carlos Condit, the Tristar Gym prospect has tore through a laundry list of more than worthy opponents with only the headlining Diaz able to force MacDonald to a decision. The heir apparent to St-Pierre, MacDonald has shown an unflinching tenacity in the Octagon, overwhelming opponents with speed, strength, and a proficiency in all areas of the fight. MacDonald is focused on adding Penn to his win column and staying healthy so he can add many, many more names.

“I'm being a little bit more smart with my training with taking days off,” says MacDonald. “I used to never take days off, even if I was hurt. It's been keeping me healthy. For me, health is the most important thing. I know how to fight. I'm in shape all year round because I train all year round. If I'm healthy, I can fight on a minute's notice.”

There is little to question in the international altercation between 205-pound knockout artists Rua and Gustafsson. It’s simply going to be fantastic. The 6’5” Stockholm slugger by way of Alliance MMA is riding a path of destruction through the UFC’s light heavyweight division, going 6-1 with five finishes. Multiply that guaranteed fireworks resume by the Brazilian bomber Rua’s 21 wins with 18 via KO/TKO. Possibly more than any other fight on this card, “Shogun” vs. “The Mauler” is simply close the cage door, ring the bell, and shut up and watch the amazingness unfold.

“I think it's a fight every fan wants to see because we both look for the knockout,” affirms Rua, who, in the understatement of the century, estimates this will be a good fight. “We're both strikers. I think the fans will get a wonderful show.”

Finally, in the main event, arguably the most talent-rich division in the UFC will put its title on the line between champion Henderson and challenger Diaz. The 27 year-old Diaz earned the title shot with three dominant performances, including a win over Donald Cerrone and two finishes over former PRIDE lightweight champion Takanori Gomi and Jim Miller. Not surprisingly, Diaz had little to say about the importance of this title fight to himself minus that it was important and that it was good for the Cesar Gracie gym, “I think it's good because it represents my team.” It’s not surprising to hear Diaz talk of others instead of himself, as in all of his victories Diaz rattles off dozens of names to thank who helped him win. If the younger Diaz is victorious on December 8th, expect to hear a shout out to everyone in the Stockton, California phonebook.

As for the lightweight belt’s current owner, the 17-2 Henderson realized an oft prophesied possibility in 2012 by winning the UFC lightweight title from Frankie Edgar after formerly holding the WEC lightweight title. Six months later, “Smooth” tangled with Edgar for a second time to another tough decision to keep the belt. The 29-year-old who fights out of the MMA Lab in Glendale, Arizona is looking to move past the Edgar clashes and stamp out a streak defending the title like some of the other UFC champions. For Henderson, fighting the best a division has to offer will always be difficult, and any type of win will be a hard fought and deserved one.

“As far as me beating Nate, I'm just trying to get the W and get my hand raised,” says Henderson. “If he slips on a banana peel, I'll take it. If it's an even closer razor-thin decision than with Frankie, I'll take it. We all fight to end fights, but sometimes when you are fighting the best guys on the planet it isn't easy to make it decisive. I'm going to try to do my best to get my hand raised.”

On December 8th, live on FOX from “The Emerald City”, the UFC has a Saturday night blockbuster to remember with three hotly anticipated Fight of the Night candidate bouts and a main event lightweight title fight. The holiday presents come early as fight fans are treated to a free stacked card fit to honor the UFC’s first successful year of caged combat on FOX. Can’t even imagine how they’ll top this next year.