With Four Years Under His Belt, Riddle is Ready to Make His Move

"I just like the roar of the crowd, and people pay money to see us fight and I want to be as exciting as possible." - Matthew Riddle 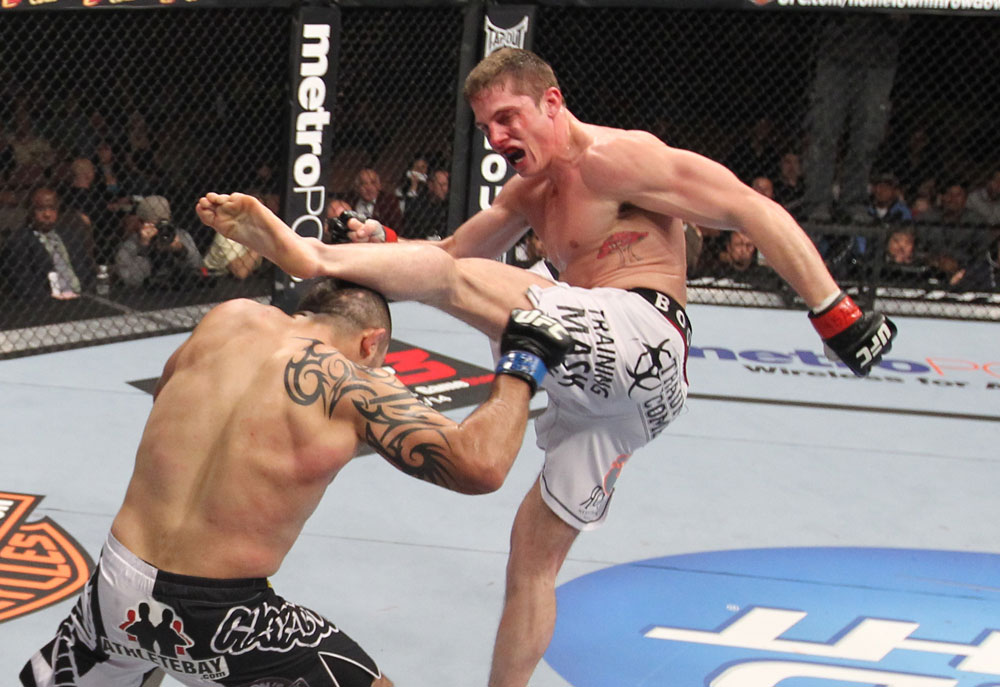 Expect to see the mean mugging left at home when smiling welterweights Matthew Riddle and Chris Clements open up UFC 149’s Pay-Per-View main card on Saturday night in Calgary. But that’s not bad news for those expecting plenty of bang for their buck; these two will slug it out, it’s just that they’ll do with wide grins on their faces. Yeah, it’s odd, but not to Riddle.

“I just like the roar of the crowd, and people pay money to see us fight and I want to be as exciting as possible,” he said. “I look at every fight as like I’m not trying to win on points. I’m trying to finish you. I want to knock you out, I want to hurt you where you don’t want to fight me anymore. That’s how I fight, and I get joy out of that. When you get in those exchanges and you’re banging back and forth and going for takedowns, it’s a good time.”

It’s not a gimmick either. Ever since he first slammed onto the MMA radar on season seven of The Ultimate Fighter, Riddle hasn’t stopped smiling, even through the usual ups and downs with not only being a fighter at the highest level of the game, but of fighting your entire career under the brightest of spotlights. That’s an admirable trait in and of itself.

“I just have fun with what I’m doing, and I’ve got a lot of good things going on right now,” he said. “I’ve got two kids and I just stay happy. The only thing that does stink are the injuries. After my last fight I broke my hand and then I had a fight coming up and I hurt my ribs, so the injuries do suck, but other than that, it’s great.”

That may not be what some veterans of the fight game want to hear. They would like to paint Riddle as a kid with a sense of entitlement due to the fact that he didn’t make his way to the UFC through the local circuit. But that assessment couldn’t be further from the truth. Riddle has had to pay his own set of dues growing up in public, so to speak, and he knows that he is fortunate to have bypassed some of the pitfalls his peers haven’t.

“Because of my lack of experience on the regional circuit, I was basically treated like gold from Day One,” he admits. “I talked to a lot of fighters who have had 30 pro fights and haven’t set foot in the Octagon yet, and they’ve talked about the horror stories of not getting paid and not getting medical treatment or anything. And I’ve been taken care of since Day One.”

Yet while this may be true, the UFC isn’t running a charity here, so to stay, you have to earn your keep, and the 26-year old has done that, going 6-3 in the Octagon, including a hard-fought split decision win over Henry Martinez in February that prevented Riddle from a three fight losing streak. After the victory, Riddle healed his broken hand and began working in a gym in Del Rio, Texas, Fidelis MMA, and though the rib injury scrapped a June 22nd bout with Luis Ramos, when he got back to business and received a late notice call to fill in for Siyar Bahadurzada against Clements, he jumped at the chance.

“I think I would have taken anybody, and also the opportunity to fight on a main card of a Pay-Per-View, that was also a great opportunity that I really didn’t want to pass up,” he said. “I had the fight with Luis Ramos in Atlantic City and then I got hurt, so this was honestly great timing. I was already training for that fight and then I was coming back slowly, so I was already training a couple times a day as I was running a gym down in Texas, and I got the call, so I came up to Vegas, did a couple weeks here, and then I’m heading out to Calgary.”

Riddle has made the travel rounds in his career, from his native Pennsylvania and New Jersey to Arizona and Texas. But Las Vegas, where his wife and twin daughters live, is still home. And with a third bundle of joy on the way, Riddle may still look like a happy go lucky kid, but he’s grown up.

“The one thing now that’s a lot different from before is that I could relax,” he chuckles. “I didn’t worry about when I had a fight. I’d have four months, five months off and I wouldn’t care. But now I’ve got two kids and I got bills and all sorts of stuff, so I like to fight more often and get more opportunities.”

After four years of service in the Octagon, Riddle is feeling that he’s just about ready to start making his move toward the elite.

“I am,” he said. “I feel good, I feel confident. I go into all the gyms and I usually work everybody. When I first started, that wasn’t necessarily the case. I was good, but now it’s a different level from where I first was. I had one amateur fight and then I went straight to The Ultimate Fighter and then the UFC. But the good thing is, I always had world-class training partners right after The Ultimate Fighter.”

Now it’s time to put that hard-won experience to the test beginning Saturday night, and his plan is to leave 2012 with the momentum needed to make even more noise in 2013.

“I think I get a nice victory over Chris Clements, hopefully injury-free, and then get one more in for November-December, or maybe even sooner depending on how I feel after this fight, and rack three in a row.”