Four Stellar Matchups On Their Way to Jersey in May

"It would be great to have someone who comes in and wants to fight." - Nate Diaz 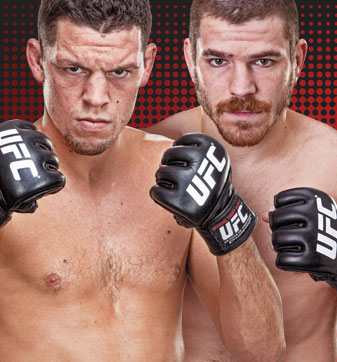 “We are going to blow the doors off the Izod Center.” - UFC President Dana White

One state’s loss is another across the Hudson River’s gain as the Octagon returns to the Garden State of New Jersey, and this time FOX is coming along for the ride. While the effort to legalize mixed martial arts in New York continues to slowly progress, “Dirty Jersey” fight fans are reaping all the benefits with an event taking place on Saturday, May 5th at the Izod Center in East Rutherford, one that will air live, and free, on FOX. The card features four clashes between high profile contenders who would solidify their place near the front of the pack in their respective weight classes with a big win.

Headlining the Octagon’s third appearance on network TV will be a throwdown between top 155 pound predators Nate Diaz and, Jersey’s own, Jim Miller. In the wake of Frankie Edgar’s rematch for the UFC lightweight championship with Benson Henderson, Diaz and Miller are piling up impressive wins on their individual resumes and could see a shot at the belt in their immediate future with a W on May 5th. Meanwhile, the event’s stacked supporting cast features a pair of elite welterweight wrestlers in Josh Koscheck vs. Johny Hendricks, a duo of atomic bomb dropping heavyweights with Pat Barry vs. Lavar Johnson, and a classic “striker vs. grappler” middleweight melee between Alan Belcher and Rousimar Palhares.

All fighters, minus Palhares, were accounted for at New York’s Radio City Music Hall on Tuesday morning to talk to the always curious press and some early-rising, boisterous fans about these upcoming contests.

First thing first, the lone middleweight combatant, Belcher, assured everyone that the eye injury that sidelined “The Talent” for more than a year is in the past and his future is fighting inside the Octagon. “I really need the top guys to challenge me; I want to find out where I'm at,” says Belcher, who triumphantly returned to the cage last September with a first round submission of Jason MacDonald. “I consider this the calm before the storm. I wouldn't say what I did before this point was mediocre, but I didn't give it my all. I'm ready to dedicate myself totally to this sport.”

The missing man on the dais, who was probably too busy practicing his patented heel hook in his native Brazil, was well spoken for by his opponent. “There is no one else unless you want to fight Palhares and no one wants to fight him,” tells Belcher of how UFC matchmaker Joe Silva offered Belcher the matchup with “Toquinho”. With Belcher’s background in Muay Thai and Palhares’ penchant for devastating submissions, it’s no surprise where either fighter wants this bout to take place. To help work on his ground game, Belcher brought in some “secret weapons” to his gym, including UFC vet Dean Lister.

The second bout on FOX features heavyweight hitters Barry and Johnson. “Both Lavar and I are allergic to jiu-jitsu, and allergic to rounds two and three,” jokes Barry about who will put his six knockout wins to the test against Johnson’s 14 knockout wins, which include his UFC debut battering of the granite-chinned Joey Beltran in January. “Does [Johnson] hit hard? I guarantee he does - he's huge. I shook his hand today and thought, ‘that's unfair.’”

No nickname could sum up the 6’4” and 250+ pound Johnson better than the one he has - “Big.” “My first fight in the UFC was in Chicago, my knockout got me here and I'm blessed to fight in the best organization and I'm not going to let my opportunity go,” states Johnson, 34, who is looking to follow-up the best win of his eight year pro career by taking out former K-1 kickboxer Barry. “This fight right here is going to put me on the map. He's not looking to go to the ground and I'm not either. I'm ready to go out there and smash him.”

Part internet hero, part human highlight reel, Barry is unmistakably a fan favorite both in and out of the cage, which is why he’s a perfect fit for a FOX fight with his guaranteed fireworks. “I think all around my entire package is what has given me this opportunity - it has a little to do with everything,” estimates Barry, who rebounded from a two fight losing skid with a “Fight of the Night” knockout over Christian Morecraft in January. “We are going to punch each other a lot on the fifth. I'm going to throw everything possible at him. All punches, all kicks, all knees, all elbows.”

Every UFC event needs a good grudge match, and fight fans can thank two former NCAA Division I National wrestling champions for this one: Koscheck and Hendricks. The resident “black hat” of the welterweight division, Koscheck is also one of its best competitors at 170 pounds. The admitted at times questionably motivated “Kos” is geared up for Hendricks both as a “pride of wrestling” matchup as well as to earn some revenge on Hendricks for his “lucky punch with his eyes closed” 12 second knockout of Jon Fitch, who is Koscheck’s longtime friend and training partner. This will be Koscheck’s first fight training exclusively at his own gym instead of the American Kickboxing Academy, which he believes has reinvigorated him.

“I'm in a new place now,” says Koscheck. “I'm excited about this fight. New coaches, a lot of new training partners. For the first time in three years I have someone teaching me boxing. I have one-on-one jiu-jitsu. I felt like I got a new life. I feel like I'm in a great place. I think you're going to see the best Josh Koscheck you've ever seen and I'm looking forward to it.”

But Hendricks, the heavy-handed, Oklahoma State University wrestling standout, believes his uproarious knockout of the top-ranked stalwart Fitch in December was anything but lucky. “If you watch where my eyes are and watch where my punch lands - it couldn't have gotten any better,” asserts Hendricks, who is on a three fight win streak and knows a title shot will only be earned through Koscheck. “The whole goal is to get to the belt; second, third, none of that matters. The pressure of winning this fight? I have to win every fight to get where I want to go.”

Lastly, in the main event, two BJJ aces who are just as likely to brawl until they are bloody will square off to determine a possible number one lightweight contender. Despite contrasting body types - “long and lean” Diaz vs. “stout and muscular” Miller - the two have remarkably similar careers, with the majority of their victories by submission, three each by KO/TKO, and that have both won a multitude of fight bonuses (eight for Diaz, four for Miller). Although much can be said about this dynamic duel, Diaz said very little outside of, “It would be great to have someone who comes in and wants to fight.” Diaz will get his wish with Miller for a full five 5 minute rounds on FOX.

Both Diaz and Miller will be entering the cage riding high from arguably the biggest wins of their career. For Diaz, a return to 155 pounds has brought back-to-back one-sided victories and back-to-back bonus checks: “Submission of the Night” over Takanori Gomi and, most recently, “Fight of the Night” over Donald Cerrone at UFC 141. Meanwhile, Miller enjoyed a seven fight win streak inside the Octagon before losing a decision to Benson Henderson last August. The Sparta, New Jersey native got back to his winning ways in his first main event with a rear naked choke on Melvin Guillard in January and, now, he has his sights set on Diaz in his home state.

“It's an honor,” affirms Miller. “I'm excited to fight in front of my home state fans. Nate and I match up very well together. I'm pretty amped already. I have to calm down because I have two more months to go. I have a ton of respect for him and his camp is a great group of guys. I really have a fire under my ass and I’m looking to come in the best I have ever been.”

Live on FOX from the Izod Center in East Rutherford, New Jersey, four different weight classes will rumble inside the Octagon for two purposes: to get one step closer to a gold belt and for your entertainment. Belcher and Palhares will continue the age-old struggle of standup vs. ground game. Barry and Johnson are cocked and ready to add the other’s head to their trophy case of knockouts. Koscheck and Hendricks are set to tangle with some added personal interest on the line. And finally, two of the best lightweights in the world, Diaz and Miller, will let their fists do the talking for them in the cage to campaign for a title shot.