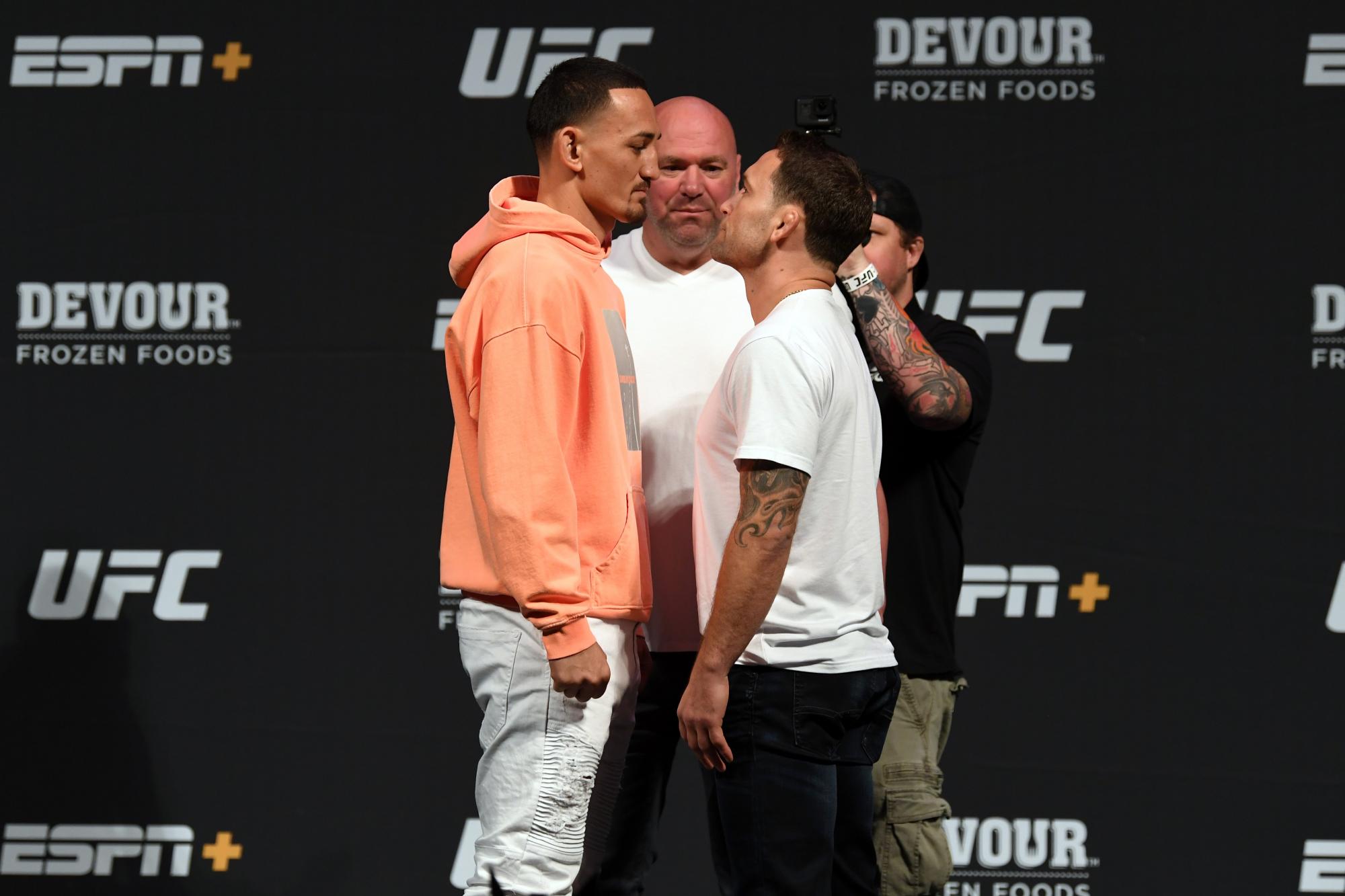 Title fights always matter and are always exciting, but the fight between Max Holloway and Frankie Edgar is especially interesting.
By Zac Pacleb • Jul. 19, 2019

Third time’s the charm, they say.

Max Holloway and Frankie Edgar were scheduled to fight more than two years ago, and after injuries, losses and a couple scratched bouts, “The Answer” gets his title shot against “Blessed.”

Holloway, ever respectful of his opponents, calls Edgar a “legend,” and he’s eager to get back into the win column after dropping his interim lightweight title fight at UFC 235.

“I watched (Edgar) do the unthinkable – the smaller guy winning a belt at a weight class that I didn’t,” Holloway said. “I tried, and he did it, so respect to him, and I can’t wait.”

Here are four reasons this fight matters a little more than the usual title fight:

This bout is almost two years in the making. First, an injury forced Edgar out of UFC 218, allowing Holloway to put Jose Aldo away for a second time. Then, the injury bug bit Holloway, and their bout at UFC 222 was scratched.

Unfortunately for Edgar, that injury paved the way for Brian Ortega to step in and hit Edgar with a fight-ending uppercut in the first round, the first stoppage loss of Edgar’s career. Ortega also jumped over Edgar and got the next title shot against Holloway, though he ran into a virtuoso performance from the featherweight champion at UFC 231.

Finally – though said with caution – Edgar and Holloway get to throw down. When UFC.com asked Edgar if there was anything different with this training camp compared to his previous two Holloway-centric camps, he kept it straightforward.

“Not really,” Edgar said. “Just making it to the end is the only difference right now.”

2) Bounce Back for Blessed?

Holloway steps into the Octagon in a rare state at UFC 240 – off a loss. After compiling an eye-popping 13-fight winning streak, Holloway went after the interim lightweight belt at UFC 235. It wasn’t to be, however, and Dustin Poirier beat Holloway for a second time, securing the belt and a date with Khabib Nurmagomedov at UFC 242 in Abu Dhabi. Now, Holloway returns to defend his featherweight throne, fresh off a fight that left him bloodied and humbled.

“Life is about chutes and ladders,” Holloway said. “We had to slide down the slide sometimes to climb the bigger ladder, so that’s what we’re doing.”

How Holloway bounces back from his first loss in nearly six years is something to watch. In his three other post-loss fights, Holloway’s record is 2-1, the lone loss coming against Conor McGregor and his last before fighting Poirier. But Edgar isn’t expecting anything but the best version of “Blessed” on July 27.

“Everybody deals with it differently,” Edgar said. “He could have some doubts or he could be super motivated. I’m anticipating the most motivated Max that’s been in there.”

3) A Year Without The Answer

Edgar didn’t take much time to recover from his knockout loss to Ortega. About six weeks later, Edgar reasserted himself as a featherweight contender with a decision win over Cub Swanson in Atlantic City.

That was in April 2018, and since then, Edgar hasn’t stepped into the Octagon. A torn bicep prevented him from fighting Chan Sung Jung at UFC Denver in November, but the time off paid off in the form of his third bid for the featherweight belt.

“Training is only so fun for so long,” he said. “You want to go in there and show what you worked on.”

The 15-month layoff is Edgar’s longest since he took a year between beating Charles Oliveira and BJ Penn in July 2013 and 2014, respectively.

All title fights provide a milestone moment for a fighter. It’s the main goal for almost all who step into the Octagon. With that said, Holloway and Edgar can each add a notable notch to their already loaded resumes.

For Holloway, it’s another chance to carve out his status as the greatest featherweight of all-time. Although some would still ride with Jose Aldo, Holloway’s back-to-back third-round TKOs have done enough for the conversation to at least be a debate.

The Hawaiian was quick to refute that claim himself after beating Ortega in Toronto, saying he has a lot to do before he passes the Brazilian, but the performances speak for themselves.  A win against Edgar adds another legend to Holloway’s list with challengers like Alexander Volkanovski and Zabit Magomedsharipov vying for their shot at his belt.

“The mindset that I have is just do what you got to do,” Holloway said. “The number one pound-for-pound fighter in the world – I ain’t talking about number two, number three – I see people being like, ‘Oh, yeah. I got these guys and blah, blah, blah. I’m this rank.’ If I ain’t number one, don’t put me in (the rankings). Like (Will Ferrell’s movie character) Ricky Bobby once said, ‘If you ain’t first, you’re last.’ And that’s for sure. That’s the real thing. All jokes aside, I try to be number one, and the number one guy on that should be willing to fight anybody.”

If it feels like Edgar has been around forever, it’s because it’s true. Since 2007, Edgar shared a classic trilogy with Gray Maynard, beat BJ Penn three times, and had two shots at both Benson Henderson and Jose Aldo. Of his last 17 fights, eight had a belt on the line, and a win against Holloway would lift Edgar up as the eighth fighter to win a UFC title in two different divisions.

“I think my career speaks for itself,” Edgar said. “What I’ve done, I’ve been in the UFC for almost 13 years now. Winning has a way of taking care of things, and I won a lot of fights in my day.”

In essence, this fight matters in terms of who reigns supreme at the top of the 145-pound division, but individually, this bout carries special terms for Holloway and Edgar.