Fort Lauderdale Is Hermansson's Shot And He Knows It

Opportunities Like This Don't Present Themselves Often and Jack Hermansson Is Ready To Make The Most Of It
By Zac Pacleb • Apr. 24, 2019

As Jack Hermansson stood across the Octagon from David Branch in Philadelphia, he had one focus: giving the performance of his life in the biggest fight of his life.

Fourty-nine seconds later, he delivered a guillotine choke to submit the Brazillian Jiu-Jitsu black belt, earning him a performance bonus and extending his winning streak to three. All smiles afterward, he promised to erase any doubt that he could hang with the top of the division.

Hermansson got a call less than a week later with a chance to prove that to be a fact.

Although he was headed back to Norway and had a couple things planned, “The Joker” rerouted and started to prepare to fight Ronaldo “Jacare” Souza in Fort Lauderdale after Yoel Romero pulled out of the fight.

“It was on right away,” Hermansson said.

Fighters occasionally speak to the challenges of going through back-to-back camps with no breaks in-between, the most recent example being middleweight contender Kelvin Gastelum training for a fight with Robert Whittaker that fell through at the last moment and almost immediately switching gears to prepare for what would become an instant-classic with Israel Adesanya at UFC 236.

For Hermansson, his quick victory over Branch allowed him to escape fight night without any injuries, and he added that it feels “great” to have a fight in his system so recently.

“It’s just a matter of doing it right,” he said. “You can’t think you’re going to start a camp over again because it’s just a couple weeks. You have to extend the ending period of the camp, and if you do it like that, it’s no problem. It’s more about the mental aspect and to be able to reload and feel fresh again.”

Even with his body feeling fresh and his mind prepared to go through the grind once again, he has the toughest task of his career in the form of Souza, an MMA veteran coming off an impressive KO win over Chris Weidman at UFC 230. Few fighters carry more high-level experience than Souza, who is one of the most respected grapplers in the entire promotion and has patiently worked his way toward the brink of his own title shot.

Despite that and a shortened camp, Hermansson is confident in both his chances against Souza as well as his readiness.

“I only had a couple weeks to prepare, but I prepared in my mind for several years,” he said. “Ever since I got into the UFC, I’ve been watching (Souza’s) fights and watching him as an opponent, and I know his strengths, and I know his weaknesses, and I feel ready for the task.” 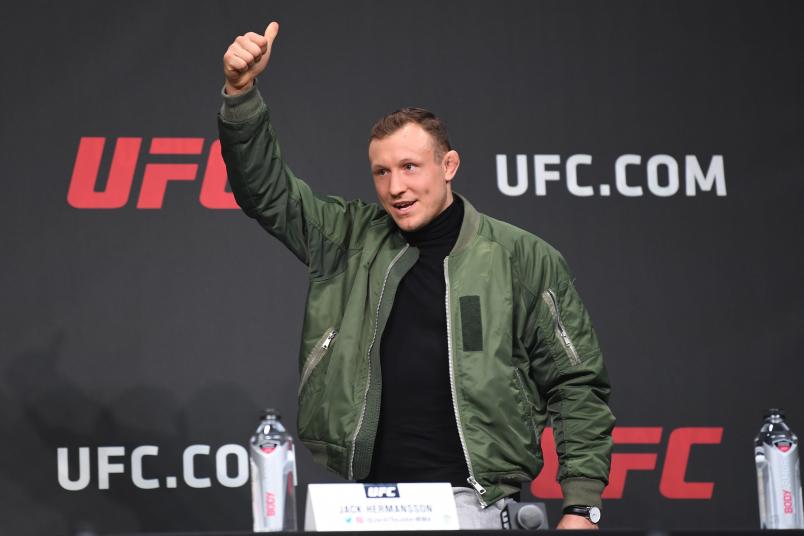 Should the night end with Hermansson’s hand in the air, he’ll find himself closer to a UFC title shot than ever. Hermansson just wants to do whatever gets him closer to a chance at the belt, and it didn’t matter what type of circumstances were surrounding that chance.

“I’m not sure it’s going to be a title shot if I win, but it is definitely going to put me in the top of the division,” he said. “We’ll see how they want to do it from there, but should I get the opportunity, that’s my dream and that’s what I want, and I’m never going to say no to that.”