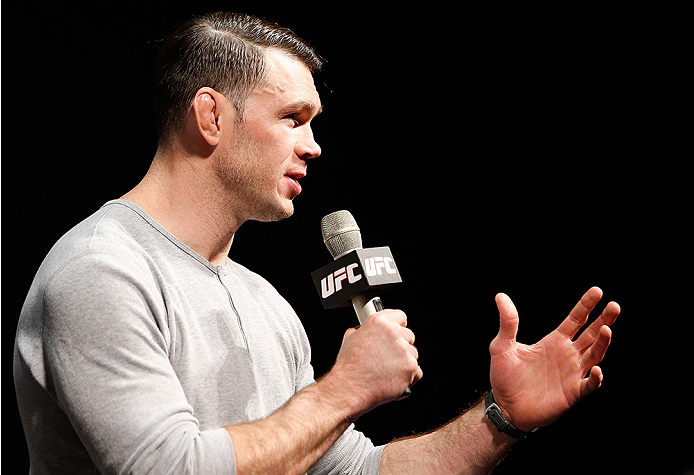 “I remember thinking that this is not a good night to be Diego Brandao.”

When Forrest Griffin reflects on the events of UFC Dublin in 2014, like many others he remembers being taken aback by the wall of noise that greeted the opening bell.

Even for a veteran of some of the most important nights in the sport’s history, he could sense that this was going to be something special.

The atmosphere had been building during a hectic Fight Week where Griffin was a focal point of promotional activity.

Griffin has been a household name in MMA circles since winning the inaugural series of The Ultimate Fighter (TUF) in 2005. Most observers agree that his tumultuous fight with Stephan Bonnar changed the course of a sport drifting away from the mainstream. By the time their fight reached its epic conclusion, a record TV audience was glued to their screens and a whole new generation was introduced to the Octagon.

Three years later Griffin defeated Quinton Jackson for the 205lb gold in a famous upset that lit up Las Vegas. His trilogy with Tito Ortiz will be remembered as one of the great rivalries of the sport and when Griffin decided to call it a day after seven successful years on Octagon duty, his place in the UFC Hall of Fame was secured.

Since hanging up the gloves, Griffin has travelled far and wide in an ambassadorial role. He is always a popular attraction, happy to answer fans’ questions, pose for pictures and interact with the people who supported him so passionately during his stellar career. Dublin was no exception.

“All week the hotel was crowded,” he said. “The fans were great. Honestly, there was all the free beer I could handle. During the Paddy Holohan fight, I was backstage arm-wrestling fans in the VIP area. It was definitely a fun atmosphere,” he said.

The fun turned momentarily to fear when home favourite Cathal Pendred looked on the brink of a knockout loss.

“Pendred employed the old Bugs Bunny strategy,” said Griffin. “He let Mike King beat him up until King exhausted himself. Pendred then caught him in a rear choke and he immediately went out.
“It must have been all the Irish fans stealing the air out of the arena.”

A veteran of huge fight nights under the bright lights of Las Vegas, even Griffin was surprised by the roar that greeted headliner Conor McGregor wherever he went. Thousands queued for a glimpse of their hero during Fight Week formalities.

“The weigh-in showed that Conor was a huge attraction,” he said. “I’ve never seen that many people come out just to see a man in his underwear.”

After the pre-fight posturing, it was time for McGregor to truly prove his worth in the evening’s main event. And when Griffin heard the cacophony of boos afforded to Diego Brandao, he feared for the Brazilian’s chances. He’d been in a similar situation when he took on Maurico ‘Shogun’ Rua in Rio de Janeiro back in 2011.

“It's not that different than fighting a hometown hero in Brazil,” he said.  “I don't know how you adjust but I've always thought any kind of energy from the crowd is good energy.”

That energy spurred McGregor on to deliver a spectacular first-round stoppage. Before the fight the mercurial Irishman was still something of an unknown force in the featherweight ranks. Yet by the time the referee intervened to spare Diego Brandao further punishment, Griffin, who had mixed it with the very best the Octagon had to offer, was convinced he’d seen a star in the making.

“That fight showed us that Conor McGregor could make good 145lbs fighters look bad,” he said. “That night he proved he was a top-level guy. It was in his next fight, against Dustin Poirier, that he showed us he was great.”