"To me it’s the scarcity of resources. It’s like driving. I don’t care that you want to get to the same place; I want to get there first and if I’ve gotta cut you off to do it, I’m gonna cut you off." - Forrest Griffin 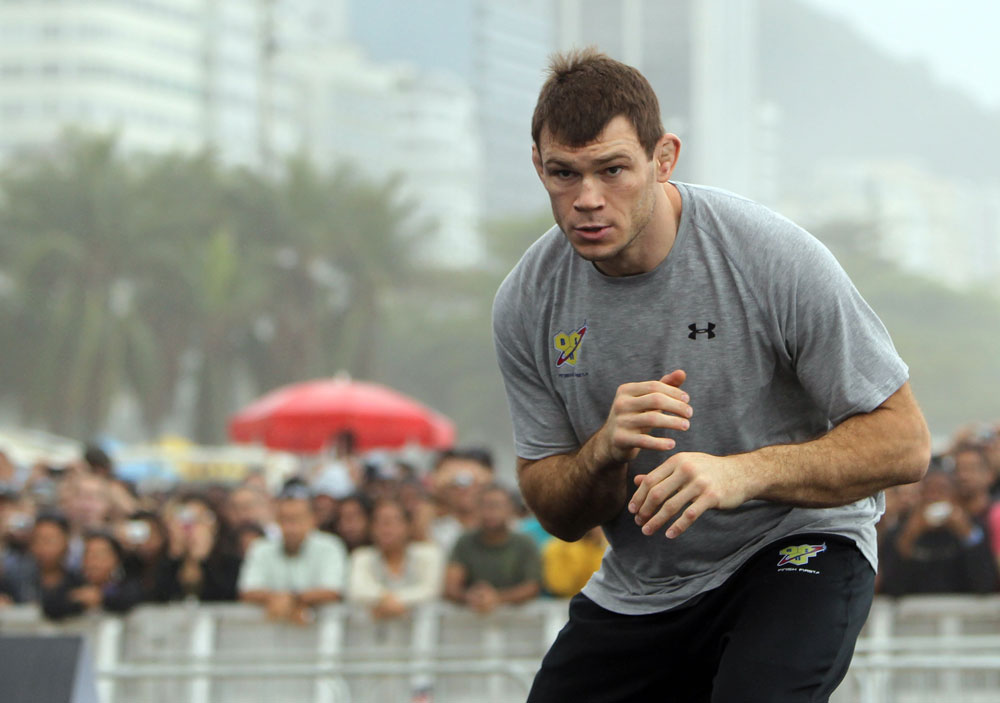 The beauty of Forrest Griffin is that he doesn’t put too much stock in drama, but he’s been a part of so many dramatic moments in the UFC Octagon. He isn’t prone to waxing poetically about the emotional highs and lows of life in the fight game, yet he’s worn his heart on his sleeve and bared himself to the world on a more than a few occasions.

It’s that paradox that keeps us watching, keeps us glued to his every move, even though that’s something that doesn’t exactly thrill him too much. If he had his way, his job would consist of training, the occasional fight, and a paycheck at the end of the night. Action figures, video games, and interviews aren’t really his thing (well, maybe the action figures are), and he hasn’t been shy in letting that part of his personality run wild.

And that’s fine, considering that when the bell rings, he isn’t holding anything back. He is as raw as it gets in this sport, and while raw isn’t always pretty, there is something so compelling and pure about it that we can’t turn away.

Back in September of 2007, Griffin showed how good raw could be. He didn’t have the hype Mauricio “Shogun” Rua had as one of the best light heavyweights on the planet and he wasn’t expected by most fans to be anything but a sacrificial lamb for the Brazilian bomber’s debut in the UFC. But 14 minutes and 45 seconds into their fight, it was Griffin’s hand that was raised in victory after he submitted the former PRIDE Grand Prix champion with a rear naked choke. Even today, the usually deadpan Griffin can admit that it was one of those moments he will never forget.

“That was really a good night for me,” he said. “You can tell by how stupid I acted after the fight. The momentum, finishing the fight with 15 seconds left, it was one of those things – I don’t think he’s gonna stop me, I’m not gonna quit.”

Nearly four years later, Griffin and Rua will meet again, this time in Brazil in the co-main event of UFC RIO. Both men have won and lost the UFC 205-pound title and seen their share of ups and downs. They’re not the same fighters or men that they were in 2007. But Griffin’s approach to the fight is the same as it was then.

“It’s the same mentality this time,” he said. “I’m gonna try and go forward, I’m gonna fight him and I’m not gonna back down. I’m not gonna fall down and crumble, and every scramble, I’m gonna scramble with him. Yeah, there’s a good chance that he’ll catch me with a running hook or a knee or something, and I’ll be done, but he’s gonna have to earn that. I’m coming after him too. I’m in a pretty good place mentally because I’m not so attached to the outcome. I care more about how I perform and more about not going out there and laying an egg, aka pulling an Anderson Silva. As long as I fight and fight well, I don’t give a f**k.”

The win over Rua was a huge upset, not as huge as that year’s Matt Serra win over Georges St-Pierre, but a damn close second. Yet lost in the euphoria and surprise of one of the sport’s greatest shockers was the fact that Griffin wasn’t shocked at all. In fact, he requested the fight with Rua when it was announced that he was coming to the UFC.

“I heard all the PRIDE guys were coming to the UFC and I figured I’ll take Dan (Henderson), I’ll take Wanderlei (Silva), I’ll take whoever,” he said. “Give me those guys. To me, it was a way to get out of the pack. It seemed like there were a bunch of us kinda at the same level, and it was a way to propel myself toward the top and that title shot. You beat the man and you get to be the man, or some such nonsense.”

And for a while, Griffin was THE man. Following the Rua bout, Griffin did a stint as a coach on The Ultimate Fighter and then fought and beat his opposing coach on the show, Quinton “Rampage” Jackson, for the UFC light heavyweight crown. But five months after winning the belt in one of the greatest fights in organization history, Griffin lost it to Rashad Evans at UFC 92, and then suffered a first round knockout loss to Anderson Silva in a 2009 bout. He hasn’t lost since, defeating Tito Ortiz and Rich Franklin in back-to-back bouts, but he doesn’t see himself as being on this unbeatable run through the division.

“It ain’t been exciting, fresh or fun since 2008,” he said. “It’s a job, it’s money, and I have a great job, I realize that. Just because it’s work doesn’t mean I’m not gonna do it. You man up and you do your job and I make a lot of money doing this, and I love money and I love the freedom and ability money gives you. I’m having a kid and my kid ain’t gonna ever want anything. My little brother wants to go to college, he’s going to college. The only thing that gives my mom pleasure in life is buying s**t off QVC, and I’m gonna pay those bills. I paid my mom’s house off. If my wife’s family needs help, I’m gonna take care of that. It’s the whole thing I write the books on – it’s being a f**king man.”

In other words, is the thrill gone?

“It quit being fun when I realized I wasn’t getting better,” he said. “I’m plateauing or almost getting worse sometimes. One of the essential elements to have in this is your perceived expectation of the future, and I’m a painful realist, so I realized that I’m not going to get better; this is it. It’s only gonna get worse from here on and you fight as much as you can, you fight until you don’t have it anymore, and then you fight a couple more times after that.”

It’s a raw (there’s that word again) assessment from one of the most no nonsense fighters in the game, either today or ever. If he’s worried about anyone’s perception of his comments, he’s not showing it, and to him it makes every bit of sense because he knows that when his name is called, he’s going to show up. And no matter what’s going on in his life, he can get away from it for 15 minutes or less. When reminded of this, he agrees, but with a disclaimer at the end.

“It’s real hard for that s**t to enter your mind when somebody’s choking your face off,” he said. “You’re in that moment of getting your face choked. You ain’t thinking about the bills, your mortgage or your boss. It’s freedom from that. Well now, the problem is that I’ve got a good life. I don’t want freedom from my good life. I love my life. I’ve got an awesome wife, my cat’s cool as s**t, he’s pretty healthy, and life’s pretty good. Now I don’t need a reprieve from life.”

Married, child on the way, bestselling author of two books, and on a two fight winning streak fighting in the co-main event of one of the biggest events of 2011. Doesn’t sound like a bad streak at all for Griffin. So what’s the motivation then?

“I’m a man, I’m a provider, and you’re genetically hard-wired to do that,” he said. “I want to be the man. Grandma needs a hearing aid, I’m gonna do that. Opportunity becomes a lot like responsibility when you sit with it. I have an opportunity to make a lot of money and do a lot of great things, and I’m gonna do that. That’s what a man does, whether he wants to do it or not. I have this opportunity, so why wouldn’t I take advantage of it. I know at some point I’m gonna be an old man walking through Target, and I’ll be like ‘man, I wish I would have done this, or given that.’ And I never want to have that regret, so I’m gonna push myself as hard as I can for another three or four years, five, maybe six fights, do as much as I can, make as much money as I can, fight as many good fights as I can, and when it’s over, I won’t have any regrets.”

“I really enjoy being the man,” he continues. “I enjoy my family counting on me and I enjoy being able to provide for my family and my extended family. That gives me a great sense of pride that I’m able to do that. My best friend in the book, Big John, he passed away and I promised him that I would make sure his son never went without, and I’m gonna have to keep that promise. But I’m not mad about it. I’m just happy that I’m in a position where I can actually keep those promises and take care of people. I thought, what can I do good? What can I do in this world to make things better and you know what I can actually do? I can win these fights, make this money, and help those around me. That’s what I can do.”

When it’s put like that, it kind of takes the shine away from asking about future fights or title shots. But Griffin is a fighter in one of the most high-profile divisions in the sport, a win over Rua makes him 3-0 in his last three fights, and if Jackson defeats Jon Jones for the 205-pound belt in September, a rematch would be one of the biggest fights you could possibly make. And Jones-Griffin wouldn’t be half bad either. So despite his doom and gloom of earlier, could he see another title run in his future?

“I’m not a coward,” he said. “If I find myself in an opportunity to make a play for it, you better believe I’m gonna go for it. I’m gonna play the mountain analogy every time someone asks me about the belt. You look up at the mountain and that mother**ker’s high. You’re gonna get disenchanted and disillusioned and you’re gonna quit climbing. You look down and say s**t, I’m pretty high up here, you’re gonna fall and lose your footing. I keep my eyes on my next foothold, on my next handhold, and on my rope. I don’t look up, I don’t look down, and that’s the way you gotta be.”

That means nothing but “Shogun” Rua. And despite the fact that the two have history and the stakes are even higher the second time around, there’s no animosity, no bad blood between the two. It’s the way Griffin likes it, because when it’s time to fight, everything that happened before really doesn’t matter.

“Business is business,” he said. “He (Rua) actually is a nice guy, I’m a nice guy, but a fight’s a fight. To me it’s the scarcity of resources. It’s like driving. I don’t care that you want to get to the same place; I want to get there first and if I’ve gotta cut you off to do it, I’m gonna cut you off. It’s not personal, it’s just business. I need what I need for me and mine more than you need what you need.”