Forrest Griffin: He Did It His Way 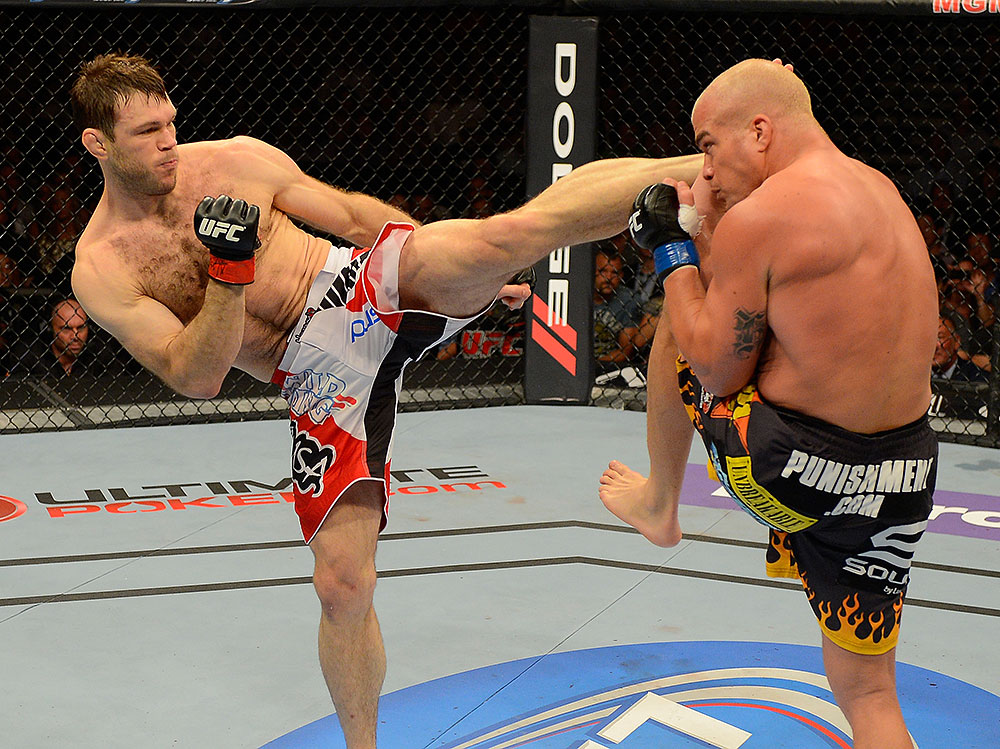 If you expected Forrest Griffin to retire with an emotional, tear-filled speech Saturday night at UFC 160’s post-fight press conference, then you don’t know Forrest Griffin.

Then again, the original Ultimate Fighter winner and former UFC light heavyweight champion didn’t endear himself to a generation of fight fans for his gravity in such situations.

“It's been a good eight years, I guess,” Griffin deadpanned. “The biggest thing I've learned is that when (UFC president) Dana White says retire, you should retire. Otherwise you will blow your knee out before your next fight. Thank you guys.”

With that, the 34-year-old walked off into the sunset after a career that not only entertained, but also helped put mixed martial arts on the mainstream map after his epic three round battle against Stephan Bonnar in the first TUF finale in April of 2005. Fittingly, White announced after the press conference that Griffin and Bonnar will go into the UFC Hall of Fame together this July.

As for the Ohio born, Georgia raised Las Vegas resident, he is expected to stay with the UFC in some capacity to be announced, joining his soon to be fellow Hall of Famers Chuck Liddell and Matt Hughes as company execs.

And while Griffin kept it light in post-announcement statements, as is his custom, whenever he stepped into the Octagon for his 15 UFC fights, he was all business, a living example of the adage that while some fighters say they leave it all in there, he actually did it, beginning with the first fight against Bonnar, a three round slugfest that capped the first season of the reality show that saved the struggling UFC.

When it was over and Griffin had his decision win and a UFC contract, I had the pleasure of catching up to him and beginning what would be an intriguing, to say the least, series of interviews over the years. At the time, he still wasn’t used to being in the big show after battling it out on the local circuit, where he compiled a 9-2 record that included wins over Chael Sonnen and Jeff Monson, with his only losses coming against Dan Severn (who he debuted against in 2001) and Jeremy Horn.

Of his first pro bout, one against a UFC Hall of Famer in Severn, Griffin said, “I was a hometown kid and they wanted to use the angle of the local kid fighting Dan Severn. The guy said he’d give me 250 bucks, and I said what the hell, I’d do it for free. At that time it was before I used to really give a s**t about it. I had a good job as a police officer, and it was a hobby – it was fun. It was a win-win situation. No matter what happened, it was Dan Severn. Who cares if you lost to him? So have some of the best in the world.”

After the bout, Griffin began to think that there was more to this fighting thing than just a hobby, but after a series of injuries and no calls from the big show, he began to doubt whether giving up his job in the police department was the wisest choice. He stuck with it though, seeing TUF as his last chance. It was a good call, as he won the show and injected new life into his career.

But less than a week after the Bonnar fight, old habits died hard, as our interview took place right after some quick home surgery.

“I don’t have insurance and I couldn’t get a hold of anybody and I was supposed to take them (the stitches) out a couple of days ago and the skin was starting to grow around them so I had to cut them out with the Xacto knife.”

This was Forrest Griffin. Self-effacing and quick-witted, with little in the way of filter, that could be a blessing or a curse, depending on what mood you caught him in. In other words, cliché questions would be met with little to no usable copy, while better researched queries got met with gold in response, such as his view on fighting:

“It’s one of those things where when you’re training and fighting, you can’t worry about your bills, your mortgage, did you get your girlfriend pregnant, your pet’s cancer, or anything,” said Griffin. “Nothing else matters but that dude trying to kick you in the face or throw you on your head or trying to rip your arm out of the socket. It becomes a singularity of purpose, which an ADD kid like me rarely gets. I like that moment of clarity in fights, and I truly have that. I lose myself in the details of those 15 minutes and you don’t worry about what people think of you.”

Despite this, Griffin did wear his heart on his sleeve in competition, where you got to see the emotion he did put into the sport and what it meant to him to not necessarily win, but to ignore his fears and give his best.

“That fear for me is always there,” he said. “It’s a scary feeling. You’re alone in a cage and everybody’s watching and the fear really comes from knowing that I owe this to myself. I’ve done this much work and this is the thing I want. It’s that fear that the thing you want most in your life is within your grasp and it’s up to you to take it. That’s a lot of pressure, but I’ve been around a couple more times. I’ve had it happen a bunch now so I’ve become more accustomed to the fear. It’s like skydiving. It’s never gonna be mundane.”

Neither was Griffin’s career. After defeating Bonnar, he produced first round finishes of Bill Mahood and Elvis Sinosic before getting matched up with former light heavyweight king (and another future Hall of Famer) Tito Ortiz on a UFC 59 card aptly titled “Reality Check.” And after suffering one round of abuse at the hands of “The Huntington Beach Bad Boy,” Griffin had some soul searching to do.

“I knew I was better than what I was showing and I knew I was falling apart in front of a lot of people – my family and friends – and I was letting my team down,” he said. “I was disgusted with myself for it. It’s like when a bully pushes you at school and you don’t do anything about it – you let it sink in and you just get angry and then do something about it hopefully. If you’ve watched any fight I’ve ever been in, you fight. I just couldn’t live with myself if I quit.”

He didn’t, and he roared back into the fight over the next two rounds, eventually losing a razor-thin split decision. More importantly, he proved that he belonged among the elite. There would be growing pains though, as a rematch win over Bonnar in 2006 was followed by a shocking knockout loss to Keith Jardine. The defeat devastated Griffin, with the anguish evident on his face in the Octagon after the bout.

“It made me question myself and what kind of fighter I’m gonna be,” he said. “I thought my chin was a little better than that. It kinda makes you wonder. I’ve never been dazed by a punch before. It’s just a scary feeling, knowing that I could feel like that again, that maybe I’m not who I thought I was. I always thought I had a solid, solid chin, and there’s a lot of doubts in my mind, questions about the way I’m gonna fight.”

In his next bout against Hector Ramirez at UFC 72 six months later, Griffin fought a disciplined three rounder and emerged with a decision win. That set up what most assumed to be a sacrificial lamb type matchup against PRIDE import Mauricio “Shogun” Rua in September of 2007.

“I don’t care,” he said before the fight when asked about the perception that he was being led to slaughter against the Brazilian. “I didn’t even think about it, to be honest.”

It ended up being one of Griffin’s defining wins.

To put the victory into proper context, it pays to remember that Rua was seen by many to be the top light heavyweight in the world at the time, even though he wasn’t in the UFC. Griffin was two fights removed from a knockout loss. Put two and two together and this wasn’t going to end well for the TUF 1 winner. But it was Griffin dominating the bout and then submitting Rua with 15 seconds left in the fight.

What followed one of the greatest upsets in UFC history was one of the greatest fights in the organization’s history, as Griffin won a five round unanimous decision over Quinton “Rampage” Jackson on July 5, 2008 to win the UFC light heavyweight title. The kid who thought of quitting the sport a few years earlier was a world champion.

Griffin’s reign was short lived, as he was stopped by Rashad Evans in December of 2008 and then lost a UFC 101 bout in the summer of 2009 to Anderson Silva. But Griffin’s place in the UFC hierarchy was set for life. His popularity among fans never waned, he wrote two best-selling books, and he even had his own action figure, something that was near and dear to his heart (or at least he said so with tongue firmly planted in cheek).

“I remember when I was a kid, I would actually burn and rip my GI-Joes up,” he said. “When they lost battles I would melt them and put my mom’s makeup on them for blood – I got in a lot of trouble for this by the way – and smash them if they had a car accident or something, and I can’t wait to see a Forrest Griffin doll beat up with some kid putting his mom’s red lip gloss over my face and breaking off one of my arms.”

In the Octagon, despite dealing with a myriad of injuries, Griffin was able to close out his career with wins in three of his last four bouts, defeating Ortiz twice and Rich Franklin once, losing only to Rua in their 2011 rematch. In his final bout, Griffin upped his slate to 19-7 (10-5 in the UFC) with a decision win over Ortiz in their rubber match. Scheduled to fight Phil Davis last December, Griffin was forced out of the bout due to a serious knee injury, and after a talk with White, the married father of a young daughter came to the conclusion that it was time to walk away.

If you’re lucky in this business, you’ll have the opportunity to cover someone like Forrest Griffin. And as soon as he told me his thoughts on being a UFC fighter in our first interview in 2005, I knew I was one of the lucky ones.

“I didn’t get here through all that hard work and winning fights nonsense,” he said. “I got here through a TV game show, and I’m comfortable with that.”

He knew the real truth though, and in the years that followed, through watching his work ethic and wins, so did we.