Formiga Will Do Whatever It Takes For A Title Shot

“For the last three fights, I’ve been calling him out. So I don’t know what I have to do. Winning against Benavidez, there’s not another way or another fight besides Henry Cejudo.”
By Damon Martin • Jun. 26, 2019

It has been six long years since Jussier Formiga last stood across the Octagon with Joseph Benavidez staring back at him.

At the time, Formiga was just two fights into his UFC career, as the flyweight division was still establishing itself with a list of contenders all vying for an opportunity to compete for the title.

Four months earlier, the Brazilian had earned his first win in the UFC with a unanimous decision victory over Chris Cariaso and he knew that beating Benavidez could put him directly in line for a title shot.

Unfortunately for him, the result of the fight was nothing short of disastrous.

Just over three minutes into the opening round, Benavidez connected with a stiff knee to the body that had Formiga in serious trouble. Benavidez followed up with a flurry of punches that forced the referee to intervene and stop the fight before any more damage could be done.

It was a harsh lesson but one that Formiga had to learn so he could truly prepare to face the best fighters in the world while competing in the UFC.

“I definitely remember that fight,” Formiga said when looking back at his first encounter with Benavidez.  “I was facing a guy six years ago who was ready for the UFC. I was just walking through the door.

“I believe today, I’m a completely different fighter. I’ve been in the UFC and I have the credentials and I’m definitely a better fighter than I was six years ago.” 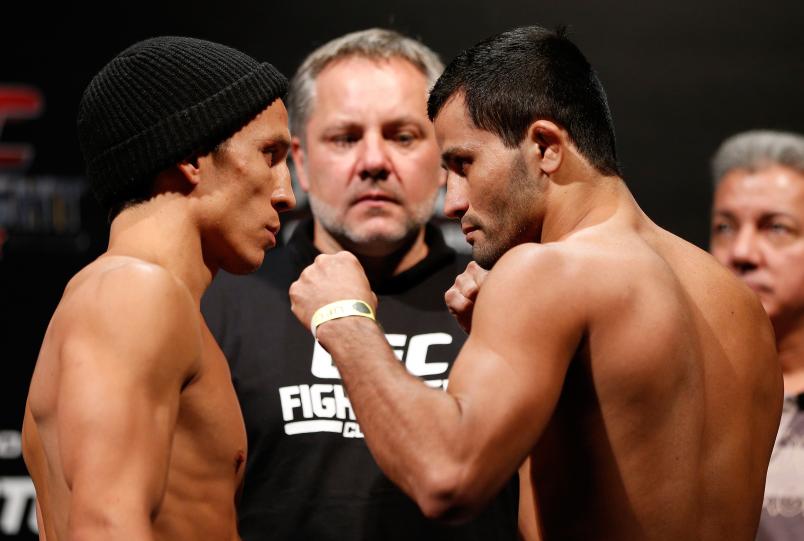 While Formiga faced more than a few ups and downs after that loss to Benavidez in 2013, the run he’s been on lately has truly established him as one of the elite flyweights competing in the UFC.

Formiga has rattled off four straight wins, including a pair of submission victories as well as a unanimous decision earned in his last fight as he handed previously undefeated flyweight prospect Deiveson Figuiredo the first loss of his professional fighting career.

While there are many factors that can play into the momentum of a win streak, Formiga specifically points to his training partners and coaches at American Top Team as the difference between being a top 10 fighter and a serious threat to the flyweight champion.

“The time that I’ve been at American Top Team, the combination of everything has been amazing,” Formiga said. “The coaches, the strategy, training, fighting camp, everything together pretty much shows during the fight.”

In preparation for this fight, Formiga has continued to get better in every aspect of his mixed martial arts arsenal while also keeping a close eye on Benavidez as an opponent.

Obviously, Formiga knows that Benavidez has continued to grow and evolve since their last meeting but he promises that the former two-time title challenger is in for a rude awakening if he believes the fighter he’s about to face on Saturday night is anything like the person he finished with strikes six years ago.

Formiga isn’t going to give away his strategy any more than he’s going to offer a prediction on how the fight with Benavidez is going to end. The only thing he can guarantee is that he’s coming ready to fight with 100 percent belief in himself that he’s going to win and he can only hope that he’s facing the best Benavidez the world has ever seen because that’s exactly what he wants.

While any win in the UFC is important, Formiga isn’t looking to eke out a close decision when facing Benavidez, especially as he looks to avenge a prior loss and cement his status as the No. 1 contender at 125 pounds.

That’s why a unanimous decision win just isn’t good enough when it comes to how this fight has to play out.

If all goes well, Formiga believes that his next fight should be with the flyweight title on the line against reigning champion Henry Cejudo.

Formiga lost a razor close split decision to Cejudo in a previous meeting, but much like the way he’s getting ready for Benavidez, he knows a rematch against the Olympic gold medalist would go differently the second time around.

“I feel that I was ready in the position for a long time as the No. 1 contender to fight for the title. But you know what, I don’t care who comes to challenge me. I don’t care who my opponent is. If Benavidez is the one that I have to go through to get the title shot, so be it,” Formiga said.

“For the last three fights, I’ve been calling him out. So I don’t know what I have to do. Winning against Benavidez, there’s not another way or another fight besides Henry Cejudo.”