Formiga Finally Wins The Big One

It took four UFC fights, but hometown hero
Jussier Formiga finally showed off the form that had him listed among
the best flyweights in the world on Sunday, as he submitted Scott Jorgensen in
less than a round in UFC Fight Night action from Ginasio Nelio Dias in Natal, Brazil.

“Scott was the favorite," said Formiga, who was 1-2 in his first two Octagon bouts. "Everyone I fight is the favorite. This win proves that I’m able to beat tough opponents. I’m here to prove I’m one of the top fighters in my division."

Jorgensen (14-9) set a furious pace at the
start, looking to implement his striking game as Formiga tried to find
an opening for the takedown. Formiga (16-3) didn’t shy away from
standing with Jorgensen though, and after pushing his foe to the canvas
midway through the round after a clash of heads, he had his chance to
get his ground game going. From there it didn’t take long, as Formiga
took Jorgensen’s back and locked in the rear-naked choke that forced
“Young Guns” to tap out. The official time was 3:07.

"He jumped in and when I threw he headbutted me," said Jorgensen. "It was enough to wobble me.  I woke up on the ground defending a rear-naked choke."

Despite giving up a large advantage in weight to his opponent, middleweight Thiago Santos scored the upset in a big way, knocking out Natal’s Ronny Markes in the first round.

Markes, who weighed in at 190 pounds to Santos’ 183 on Saturday, was drilled with a left kick to the body early in the opening round, and after a delayed reaction, he fell to the canvas. Rio’s Santos pounced immediately, with a series of unanswered hammerfists bringing in referee Mario Yamasaki to halt the bout at :53 of the first round. 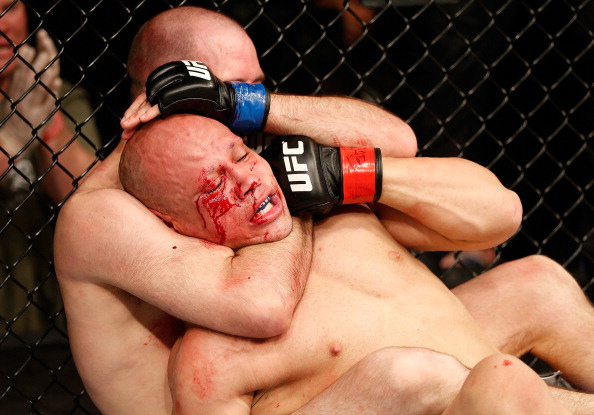 Kenny Robertson silenced the Brazilian crowd in his welterweight bout against Thiago Perpetuo, impressively submitting the Santo Andre native in the first round.

An early head kick by Robertson landed, but also landed him on the mat, as he fell with Perpetuo in the top position. Robertson escaped, got his own takedown and moved into the full mount though. He then proceeded to fire off a series of strikes on his bloodied foe, and as Perpetuo turned, the East Peoria, Illinois native took his back and locked in a rear naked choke that produced a tap at 1:45 of the round.

With the win, Robertson moves to 13-3; Perpetuo, who was making his welterweight debut, falls to 9-4-1.

Stringer hit the deck early on after Barroso tripped him there, but after a restart from referee Mario Yamasaki, a right hand from the Netherlands native returned the favor, and Stringer took advantage as he worked effectively from the top position. After piling up some points, Stringer stood up with two minutes left and then scored another takedown. Barroso got up quickly this time, only to get locked up against the fence, where the newcomer landed more punches at close range.

Barroso fired off three hard kicks to begin the second round, forcing Stringer to seek refuge in the clinch. The kicks continued once the two broke, and as Stringer looked for a takedown, Barroso reversed position and wound up on top. Midway through the round, Stringer got to his feet, with the two remaining locked up. When they broke, Barroso emerged with a mouse under his left eye and both looked fatigued. Barroso did land with a flush uppercut to close the round strong.

The pace slowed in the final round, with each fighter firing off strikes sporadically between clinches. And while Barroso may have thought that a takedown in the final minute clinched it for him, the judges didn’t agree, awarding Stringer the verdict.

In the featherweight opener, Godofredo Pepey got the Brazilian fans on their feet and kept them there, snapping a two fight losing streak with a highlight-reel knockout of previously unbeaten newcomer Noad Lahat.

The bombs were flying early from both fighters, with Lahat more on target than the wilder 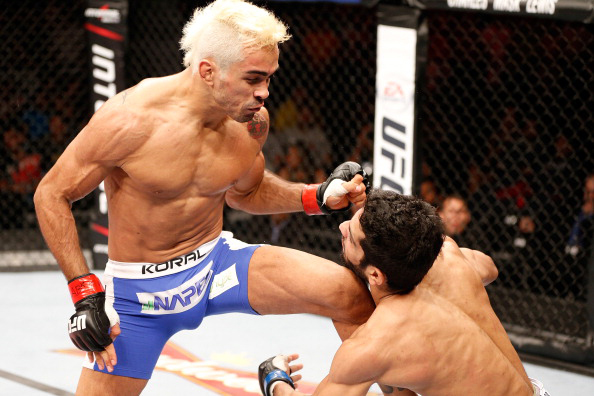 Pepey. Two minutes in though, a right hand by Pepey scored a flash knockdown, and moments later, a flying left knee from the Brazilian landed flush on Lahat’s chin, knocking him out instantly. The official time was 2:39.

“I’ve been working on this knee strike for a long time, but I wasn’t able to get it right in my past few fights because I was too nervous," said Pepey. "I wasn’t in a good place, mentally. Now I’m back. The lion is awake."