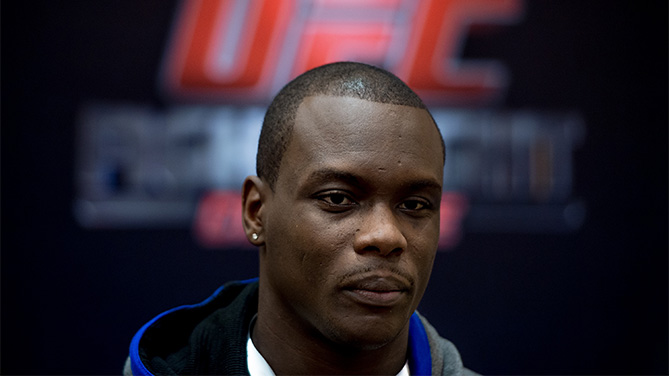 Ovince Saint Preux admits that his fighting style is unorthodox and, as he often says, “sometimes not pretty.” But the former University of Tennessee linebacker doesn’t argue with the results.

Since dropping a unanimous decision to Ryan Bader in August 2014, Saint Preux has scored two first-round knockouts, including a KO of the legendary Mauricio “Shogun” Rua last November in Uberlandia, Brazil that earned him a fight of the night bonus.

Now Saint Preux has a chance to move into the top five of the UFC light heavyweight division – and perhaps make a case for a title shot – if he defeats No. 4-ranked Glover Teixeira on Saturday night at Bridgestone Arena in Nashville, Tenn.

Saint Preux, 18-6 as a pro (6-1 in the UFC), will be fighting in what is essentially his backyard. He lives and trains in Knoxville, about a three-hour drive from Nashville, and expects a sizable contingent of friends, family and even some former Volunteers teammates to support him.

Both Saint Preux and Teixeira (22-4) have one-punch power, but Saint Preux is unpredictable, having finished bouts using a rarely seen Von Flue choke, a shoulder choke and a near-kimura (he broke the arm of Ryan Jimmo before the hold was completed).

This week, Saint Preux discussed his past, present and future with UFC.com.

Question: What’s your excitement level going into this fight as the main event on a UFC card in your backyard?

The excitement is definitely there, especially being the main event. A lot of people aren’t aware of it, but this is my third main event. My last fight (against Patrick Cummins), I wasn’t on the main card, but I wasn’t complaining because I had two main events back to back. But when I found out about the Nashville card, I’m like, OK, I definitely have to have the main event. It’s my hometown, I fought at the Bridgestone before and I feel really good about it.

Q: So you’ll have a lot of fans inside the arena?

From my gym alone, about 400 people. From my fraternity, probably 150-plus. And maybe five or six former teammates. I’m probably looking at close to 600 people being there. 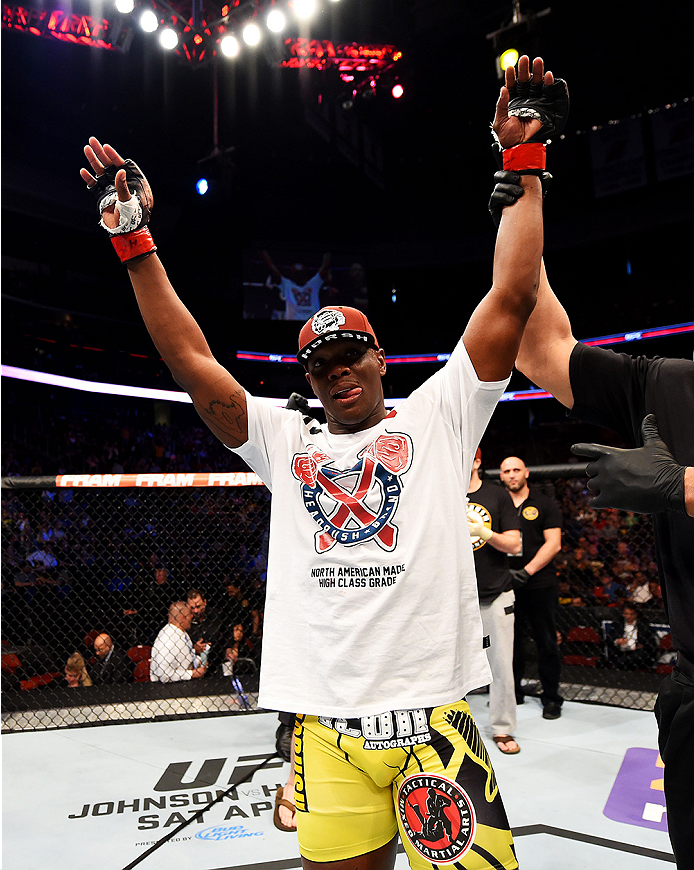 Q: How important is this fight for you in terms of putting you in line for a title shot?

Depending on how I finish the fight, I can have a good argument for that. At the same time, Glover is a title contender, too. I want to fight for the title, but at the end of the day, I just want to have my voice in it. It’s up to the hierarchy to make that decision. If they give me that chance, I’ll do it. Until then, all I’ve got to do is focus on the fight that’s happening Saturday.

Q: Did the loss to Ryan Bader set you back? Would you have fought for the title by now if you had beaten him?

It’s possible. I don’t know, but to be honest it was probably the best thing that happened to me. It put me in a position where I solidified myself in the 205 (weight) division. I didn’t take a full step back. I probably took a half step back, but it helped me redefine myself and put me in a position where I could take two steps forward instead of another step forward. That two steps forward came with the Shogun fight.

Q: So what did you learn from the defeat?

Never downplay your craft. Stick to the basics. Just go back to what got me into the UFC. Mixed martial arts is an evolution sport, and I was getting too ahead of myself. After that fight, I went back to the basics and that has helped me tremendously.

Q: You played football at Tennessee. How would you describe your career there?

It was definitely a good learning experience, especially the work ethic part of it. It carried over tremendously -- that, the patience and the discipline aspect too. They all helped me out in my mixed martial arts career. 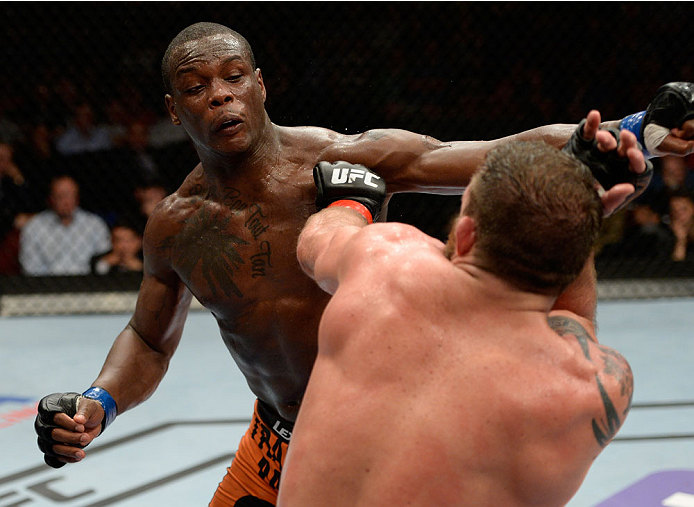 Q: You didn’t start, but did you get lots of playing time?

Not like I wanted to, but it’s one of those things where, if I went to another school, I probably would have (started). But I think things happen for a reason. It was meant for me to go there. If I didn’t go to UT, you probably wouldn’t be speaking to me right now. That’s why I’m not complaining about it.

Q: Did you try to hook up with an NFL team?

Even if you don’t get drafted, that’s one of the things you try to do because you want to pursue your dream. I told myself I was going to try. It didn’t work out; it doesn’t work out for everybody. I had a few teams looking at me, like Buffalo and Cleveland, but I never got into a training camp.

Q: Are there similarities between football and MMA? If so, what are they?

The discipline, the work ethic and the patience. In football, you’ve always got to be patient. The workouts are an everlasting grind, and that helped me tremendously. Having a good relationship with the coach is important. When you’re on the football field, it can get kind of crazy, but for some reason, you always hear your defensive coordinator’s voice over everybody else’s. That makes everything a lot better.

Q: Going back to your fight on Saturday, you lost to Bader by decision, but Teixeira KO’d Bader. Is that a concern?

It’s not a big concern to me. Bader actually clipped Teixeira in the first round, and he just kind of stood in there and got into a slugfest with him. You can’t get into a slugfest with somebody that stays in the pocket and can hit hard but can take hits, too. So he put himself in an awkward position. Does that affect me? No. I look at it like this: Bader got knocked out by Lyoto (Machida, in 2012), Shogun knocked out Lyoto (in 2010), and I knocked out Shogun.

Q: Do you see this fight with Teixeira as a stand-up fight or do you need to take him to the ground?

I think I can win the fight in every aspect. Glover hits hard, but I hit hard, too. The thing that separates me from the fighters Glover has fought is that stylistically you knew what they were going to do. I know what Glover’s going to do. He’s going to come forward, throw some looping punches. If he wants to try and wrestle me, I think I did exceptionally good doing what I did (on the ground) against Patrick Cummins. 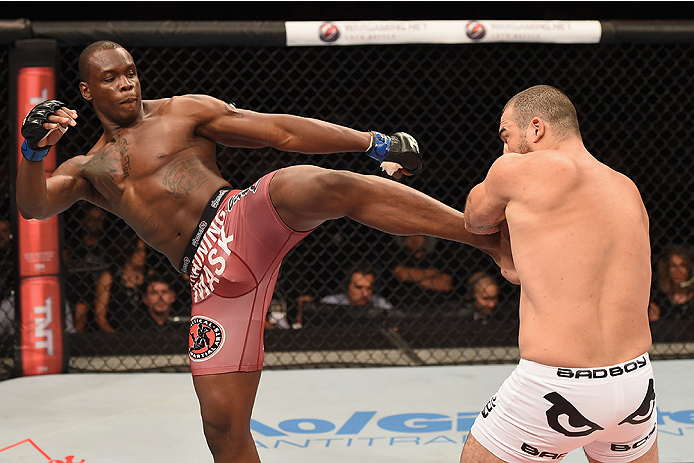 Q: On the other hand, you’re unorthodox. Nobody knows what you’re going to do. Is that to your advantage?

Definitely. If you look at my six wins in the UFC, it’s almost like a “WTF” factor. It’s like OK, what just happened? If I’m on the ground, I’m working on different submissions that put me in dominant position, but at the same time you won’t see it coming. My striking is not pretty, the way I wrestle is sometimes not pretty. If you see me rolling on the ground, I’m rolling for position and sometimes that’s not pretty. But just know that I’m working on something, and that’s the biggest thing.

Q: Your fans have come to expect something different from you every time you fight. Do you have anything in mind that they haven’t seen?

It depends on what position I’m in, but I always have a whole bunch of stuff. My trainer, Eric Turner, is good about keep my mind fresh about that.

Q: So you might have some surprises for everyone watching on Saturday night?