The forgotten piece of a crowded 145-lb picture, Holloway focused on winning

There’s a forgotten man within the featherweight division who has won eight straight fights but is often left out of the conversation monopolized by Conor McGregor, Jose Aldo and Frankie Edgar. Insert Max Holloway.

The Hawaiian native is 8-0 since 2014 and has looked more impressive in each fight after the other. But while the McGregor-Aldo saga lasted for a about a year, and with Edgar now in the mix for the interim title, Holloway’s name has yet to be mentioned in the title conversation. That could change after UFC 199.

Holloway sits just outside of the division’s big three, along with Chad Mendes at No. 4 in the rankings, and will take on fifth-ranked Ricardo Lamas in Los Angeles.

Would nine consecutive wins be enough? 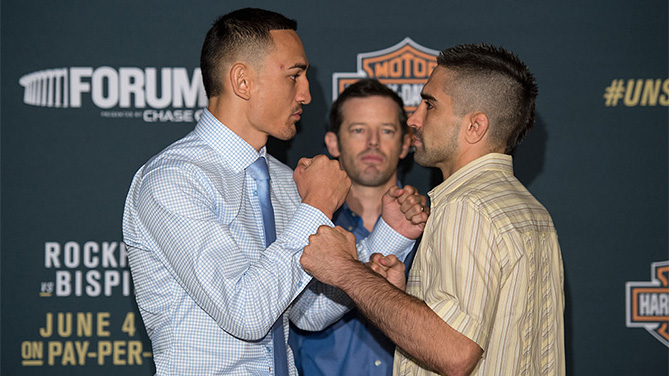 A win over Holloway could bump him past Mendes – who has lost two straight – but it could be a long waiting game. Aldo vs. Edgar is set for UFC 200, with the winner likely to face champion McGregor. Holloway had a run of eight fights in 24 months but it’s been seven months since his last fight at UFC 194. Another wait could be worth it while the other fights play out.

Of course, Holloway can’t look past Lamas, who has been a perennial contender since joining the UFC in 2011. Lamas presents a different type of opponent than Holloway has been accustomed to. Jeremy Stephens, Charles Oliveira and Cub Swanson are all strikers, whereas Lamas is a renowned wrestler.

“Max Holloway don’t change, just his opponent,” Holloway said. “We always get ready for a mixed martial arts fight. I don’t get ready for a wrestling match. That’s been the key to success.”

You can’t argue with his key to success. Saturday we’ll find out if it will work against his toughest opponent yet.