Font has his mind set on the Top 10 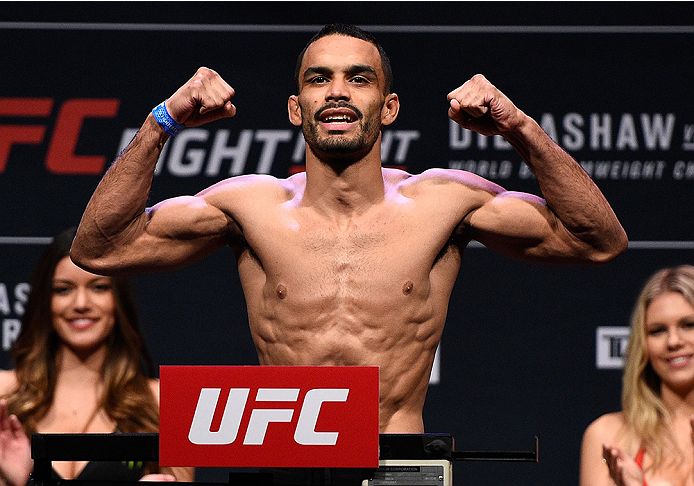 It was three years ago, to the day, when Rob Font introduced himself to the UFC faithful. Yet despite picking up a first-round knockout of George Roop and a Performance of the Night bonus on July 5, 2014, one memory is stronger than all the others.

“Honestly, I just remember my girlfriend screaming so loud,” he said. “Before we walked down, we were talking about landing that shot and she was saying, ‘I know you can do it, go out there and do it,’ and as I did it, all I heard was ‘ROB!!! This is exactly what we talked about.’ If you really listen to the crowd, you can hear her.”

Font laughs, and just like the couple is still together (after nearly ten years), the Massachusetts native is still making noise in the Octagon, where he will return this Saturday to face Douglas Silva de Andrade in the featured UFC 213 prelim bout on UFC FIGHT PASS.

“Vegas has been real good to me,” Font said of his third bout in the “Fight Capital of the World.” “I’m 2-0 with two finishes there, that’s where I won my first bonus. It’s a smooth transition from the airport to the hotel, and dealing with all the commissioners, they’ve done it for so long that it’s real smooth and easy.”

That ease in the spotlight isn’t a trait every fighter shares. Some freeze under the bright lights or prefer to stay locked in their room until it’s time to compete. Not the 30-year-old Font, who enjoys taking in the entire fight week experience.

“I just try to have fun with it and I try not to make it bigger than it is,” he said. “I know I can’t fight forever, so there’s going to be a point where I wish I was still out there talking to the fans and hanging out with everybody that’s waiting around for autographs and pictures. And when you get out there, we train so hard for that moment that you’ve got to enjoy it and take it in. There’s no point in training 30-35 hours a week to finally get out there and not embrace the moment.”

Currently ranked 15th at 135 pounds and with three wins in four UFC outings, Font has plenty of reason to enjoy his professional life at the moment. Though with the power he has in his fists, fighting him isn’t a holiday weekend for his opponents, and he knew early on that he had a little extra on the fastball than most of his peers.
MORE FROM UFC 213: Nunes says she'll KO Shevchenko | UFC 213 Top 5 Main Card Finishes | UFC 213 Countdowns: Nunes vs Shevchenko 2 | Romero vs Whittaker

“I got into a streetfight in Florida and I hit a guy and barely touched him and he went down,” he said. “That was my first time putting my hands on somebody. And then in my amateur debut, it was the same thing – I stumbled a guy with a jab. In the pros, I caught a guy named Thane Stimson with a clean uppercut and he just went lights out. From there, I knew I had the power, I just needed to get real sharp with it and find the accuracy. I believe I can put anybody away if I catch you.”

He’s finished off Roop, Joey Gomez and Matt Schnell thus far in the Octagon, but he does admit that while it’s nice to have that power in his back pocket, it isn’t always a good thing.

“It’s a gift and a curse,” he laughs. “Sometimes you get away from the game plan and forget to be smart with the touches and setting up the right punches. When you’re looking for that one time, it never really happens. So it’s good to have, but if you’re not smart with it, it can backfire on you.”

So in essence, it’s about throwing smarter, not harder. When one of those shots land, though, Font says there’s nothing like it.

“It sounds crazy, but it (landing a knockout blow) feels like you miss them,” he said. “It’s like you’re punching in air and you go right through them. When your knuckles hurt and your hands hurt, those aren’t clean shots. But when you finally touch them and it’s a clean shot, it feels like you missed and, before you know it, they’re laying on the ground. It’s the best feeling in the world. I like submissions and I want to get my submission and Demian Maia game up (Laughs), but there’s nothing that feels better than putting a guy away.”

There’s nothing fight fans enjoy watching more, so don’t expect to see Font taking any backward steps in his career from here on out, and that’s just the way he wants it.