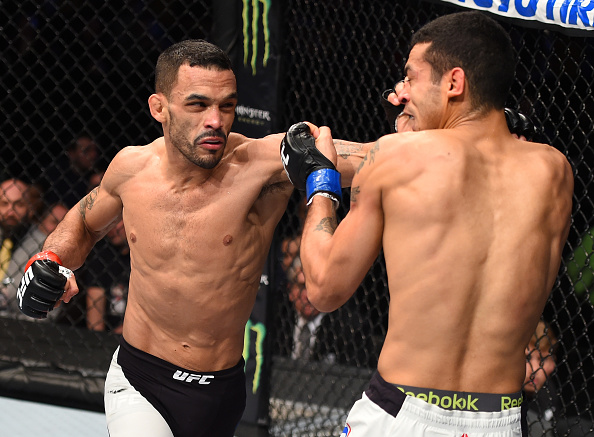 The knockout will always hold a special place in the heart of Rob Font, and considering that both of his UFC wins have ended courtesy of his fists, that’s understandable. But the week after his UFC 204 bout against Ian Entwistle was scrapped, Font wasn’t firing away his frustrations on the heavy bag. Instead, he was on the mat with and without his gi, competing in a NAGA tournament.

Is the New England knockout artist turning into a grappler?

“I’m trying,” he laughs. “I’ve got a couple tricks up my sleeve. But that (NAGA tournament) was a real fun experience. I won the first place expert division in my weight class no gi, and then I lost my first match in the gi by one point. I’ve got a lot of things to learn in the gi, but it was definitely a fun experience, and I’m going to try to step it up the next time I compete.”

That next time won’t be on the mat, but in the Octagon, as Font returns on Saturday to face Ultimate Fighter 24 alum Matt Schnell. It’s a late opponent switch thanks to an injury suffered by Alejandro Perez, but after Entwistle fell ill on weigh-in day in October and left Font without a fight at UFC 204, he would likely be willing to face anyone just as long as he gets to fight.

He tries to put a positive spin on his time in England, noting that he was able to see Manchester and London with his girlfriend, sister and his sister’s husband, but sitting in the arena and watching while his peers fought wasn’t easy.

“The fights were hard to watch,” Font said. “I was getting irritated just sitting there and watching when I know I should have been fighting. That was hard.”

What made it harder was knowing that he was about to show off everything he had learned since his lone UFC loss to John Lineker at UFC 198 in May, but now had to wait. Against “Hands of Stone,” Font was confident of victory and he went the distance with the bomb-throwing Brazilian, but he wasn’t able to leave Curitiba with the win.

“I made two mental mistakes in that fight,” he said. “I didn’t adjust fast enough and press him backwards. I kept letting him press me. And then I got hit with two body shots in the first round and I think I was worried about that way too much. I was thinking, ‘Okay, don’t get hit with a body shot,’ instead of just doing my thing. Those were the two biggest mistakes. I clean those up and I’ll be right back in there. I know I belong with these guys.”

He does, but the belonging with the elite and beating the elite are two different things, and Font knows it. That’s why he’s not depending on his power to rescue him in a fight.

“You’ve got to have Plan A, B and C and that’s what I didn’t have in the Lineker fight,” he said. “I didn’t say, ‘Okay, this is not working, we gotta take him down, get on top and look for the finish.’ So that’s what I’ve been working on a lot. Obviously, my A game plan is always to stand up and look for the finish there, but if need be, I’m confident I can take it down and finish some of these guys.”

If his renewed focus on the ground game is any indication, he may even pull off a submission. But would the 29-year-old take a tap out over a knockout? No chance.

“Knockout,” he laughs. “That’s the best feeling in the world.”