UFC Light Heavyweights Paul Craig And Jahamal Hill Put Their Heat Aside After Competing At UFC 263
By McKenzie Pavachich, On Twitter @mpavacich_ • Aug. 24, 2021

It’s probably safe to say the last thing Paul Craig expected when he entered the Octagon against Jamahal Hill at UFC 263 in June was to become friends with him just a few minutes later.

It’s not unheard of, but still pretty rare for a set of opponents who had months of back-and-forth to build the tension between them to become friends after any fight, let alone a fight that ended thanks in part to a gruesome injury.

But nevertheless, the light heavyweight matchup delivered not only a Performance of the Night bonus for Craig, but one of the greatest bromance stories we’ve seen in quite some time.

“It’s beautiful, really,” Craig told UFC.com a few weeks following his performance at UFC 263. “I got to speak to Jamahal after the fight, as two athletes who have done the war and done the battle, then I saw how real this guy is. And then we started to find common ground because we’re both fathers, we both work hard, we both have the same goal in mind, and we both love martial arts in its purest form.”

Ten days before their originally scheduled bout in March, Hill tested positive for COVID-19 and had to remove himself from the fight. Following this development, the two took to social media to express their grievances with each other over the course of the next three months.

By the time fight week rolled around in Phoenix, Hill and Craig came face to face with each other at the athlete hotel in a fervent interaction.

“Jamahal was emotionally fueled for this fight,” Craig explained. “But I believe I’m getting to be a more experienced athlete, so I’ve dealt with that kind of stuff before; I’ve dealt with people getting in my face, I’ve dealt with all of the stuff that comes along with fight week.”

“BearJew” explained that after the early fight week exchange, he felt even more confident that he’d come out on top. What he didn’t expect, however, was nearly everything that went down inside the two minutes of Octagon time.

TAKE A LOOK BACK AT EVERY RESULT FROM UFC 263

“We were really surprised when we’re both standing inside the Octagon, and he decides to switch up his stance,” the 12th-ranked light heavyweight said. “We believed that Jamahal was a southpaw fighter, and then he switched to orthodox. It might not sound like anything massive to someone who doesn’t train and watches as a fan, but that makes a massive difference to your whole game plan. It wasn’t until after the actual event that we realized that he’s not a southpaw, he’s just an orthodox fighter who learned how to fight southpaw to get an advantage in foot position. That definitely threw us off.” 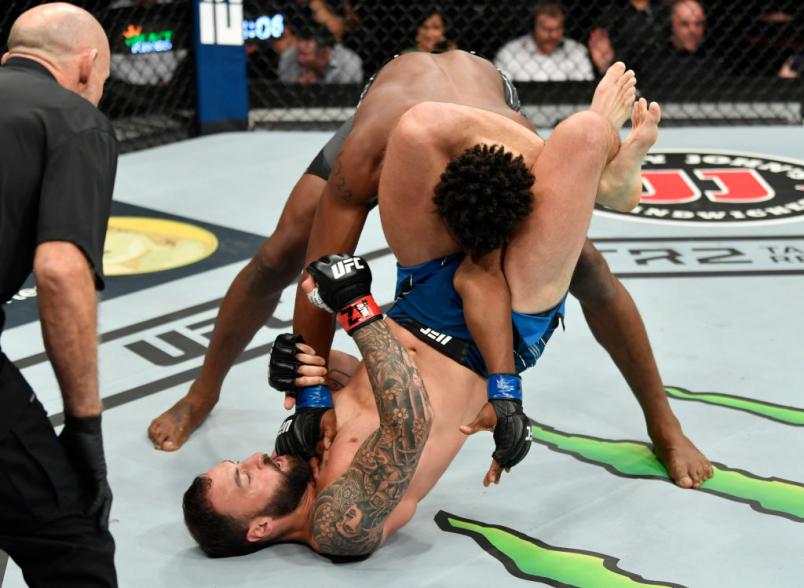 Paul Craig of Scotland elbows Jamahal Hill while in a triangle choke in their light heavyweight fight during the UFC 263 event at Gila River Arena on June 12, 2021 in Glendale, Arizona. (Photo by Jeff Bottari/Zuffa LLC)

As expected, the fight was brought to the ground, where Craig leveraged a triangle choke attempt to secure an armbar, which in turn dislocated Hill’s arm. Both seemed to know immediately what had happened, but instead of tapping, Hill pushed his arm back into place and attempted to continue fighting while tangled up in Craig’s guard.

“It’s a weird moment when you know something like that has happened,” the 33-year-old said. “It’s not blatantly obvious as a knockout, because when a knockout happens, you see the person fall to the ground. When it comes to jiu jitsu, it’s very small, subtle movements that make the difference between an arm breaking and dislocating, between a shoulder moving and ligaments getting pulled. So, in the moment, I knew what had happened and Jamahal knew what had happened, but Jamahal is one of the types of guys who’s going to go out on his shield. He’s a very tough opponent, and you’re never going to see him tap and say he’s had enough.”

The fight was stopped and Craig ultimately delivered what he had promised, and sooner than he thought, predicting “a second round submission” in an interview with UFC.com earlier in the week. What he didn’t predict, however, was the reaction that would follow.

Me and @PCraigmma are good so idc what anybody else is talking and not only did he get my drunk the whole night we straight turnt tf up!!! I'm blessed living my dream and meeting some of the most amazing ppl!!!#Stillwinning pic.twitter.com/wCA5cqzGG5

“Once the fight’s over and I see that I had a tough opponent in Jamahal, and I see that his arm’s toast, and he comes and he says to me, ‘I’ve got more respect for you, I’m going to stand next to you when you get your hand raised.’ At that point, I start to think ‘you know what, he’s a good guy.’ Not a lot of people would do that. A lot of people might get out of the Octagon as quickly as they possibly could, go backstage and get some help. But he didn't do that. I liked the fact that he said, ‘I respect you too much not to do this.’ So, at that point, I realized he’s quite a good guy.”

For better or for worse, the two are forever connected by the threads of fate, and although the bad blood has been left in the past, don’t expect there to be an opportunity for Hill to settle the score.

“If I had the choice, I’d rather not fight him again,” Craig explained. “I don’t like to run back fights that are clear cut win and lose. Even with opponents who have beat me but I think I could beat in the UFC, I don’t think there’s a point to running it back because it’s my journey. My journey is set in stone, and I don’t like to revisit stuff unless I have to.”