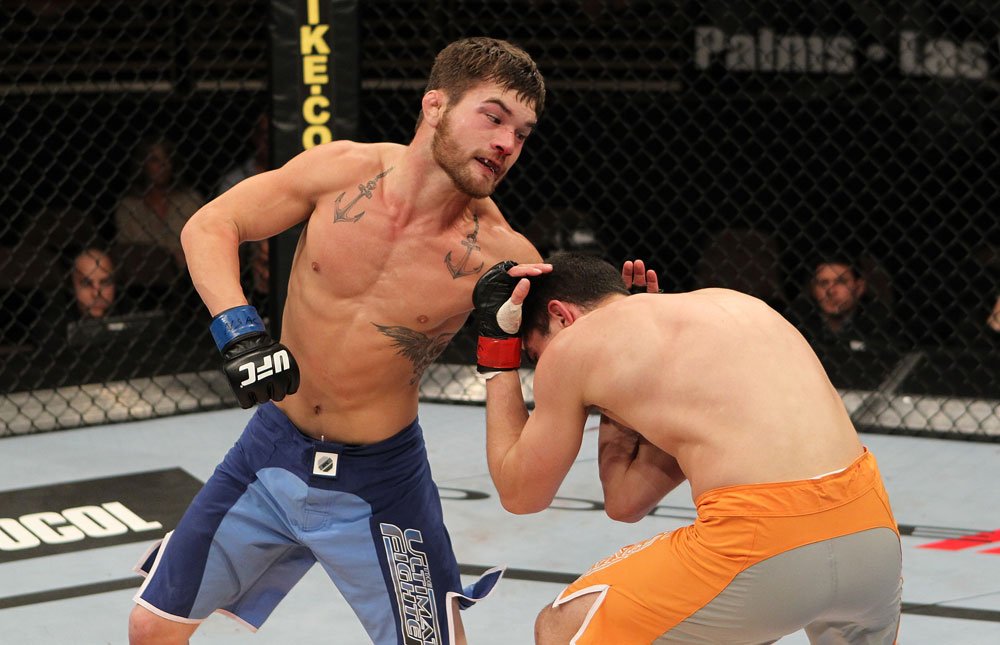 There are dozens of different ways to measure your progress in the fight game. Yet Kentucky’s Josh Ferguson may have the simplest way to determine how he’s grown since working with the Jackson / Winkeljohn MMA team in Albuquerque.

“The biggest thing is judging how bad you get your ass kicked,” he said. “The first week I was here I was always getting my ass whupped, and now I’m not getting my ass whipped so bad; I’m actually whipping some ass.”

That’s the good news. But the even better news for The Ultimate Fighter 14 competitor is that when he steps into the Octagon Wednesday to face Chris Cariaso on the UFC on FUEL TV card, he will do so in his natural weight division – 125 pounds.

“I went down to flyweight a few years back and I knew that was the spot for me, especially when I was training really hard and I wasn’t putting a lot of weight on,” said the 24-year old. “I knew I could easily make ’25, and I was walking at 137, fighting ‘35ers. I needed to be there, but there weren’t no fights or no money there. Then they finally opened up some fights and then I ended up getting a hernia and I was out for about six months after I got that repaired and rehabilitated. Then the Ultimate Fighter show came up, and that was at ’35, so I had to do that.”

At 7-3 as a pro, Ferguson’s pre-TUF record wasn’t going to scare anyone, but considering that one of his losses was to current UFC bantamweight contender Mike Easton and that he was giving up significant size advantages in many of his fights, it explained a lot when it came to the Louisville native.

“It’s just kinda frustrating,” he said. “I could still fight at ’35 and I knew I could compete, but you know how fighting is. You can do good for so long, then you lose one and everybody looks like at you like you can’t hang. But I knew the only reason was because the weight was a difference.”

And with a 14 second knockout of Casey Dyer to earn a spot on TUF14, and a good showing on the reality series, Ferguson got introduced to the world in a positive manner. A defeat to Roland Delorme on the TUF14 finale card didn’t help the looks of his record (now 7-4), but the call to flyweight gave him the confidence that he was now going to get every opportunity to show what he could do in the big show.

“I’m really excited to get to show my true abilities and not get held down but silly-ass wrestlers putting all kinds of weight on me.”

But making a solid first impression in the UFC flyweight division is key, so with that in mind, he made the move to Albuquerque to train with the Jackson / Winkeljohn team and a couple of familiar faces.

“I was on The Ultimate Fighter with John (Dodson) and Diego (Brandao) and they both won the season, so you’ve gotta think there’s something there (in Albuquerque),” said Ferguson, who worked with the team since May 19. “I knew it was good altitude training and I knew I was gonna be in a good, high-paced fight with Chris. I know he likes to move, and plus, we’re both ’25ers, and you get two ‘25ers in the ring and there’s always gonna be some action. And Chris is a southpaw, 5-3, and John Dodson is a southpaw and 5-3, and there are a lot of other southpaws down here and smaller guys. It’s hard to learn a whole lot within that short amount of time, but you do learn things, and I noticed how my body acclimated to the altitude, and my cardio has gotten way better just from all the intense sparring and stuff we do down here, so I can feel that. And if I’m banging out five five-mintue rounds up here, three five-minute rounds down at sea level should be cake.”

Now all he has to deal with is “Kamikaze” Cariaso, a former UFC bantamweight who had won consecutive bouts over Vaughan Lee and Takeya Mizugaki before making the drop to 125. Ferguson was vaguely familiar with his opponent before receiving the fight, but after signing the contract, it was all Cariaso all the time.

“It (the fight) is the only thing I’ve thought about for the last three months,” he said. “I feel like I’ve fought Chris a hundred times in the gym.”

And with each time, Ferguson gets better prepared to face the real thing in San Jose. It’s an important test for sure, but what may be even more enticing to “Taz” is that in the UFC’s newest weight class, a title shot – something that could take five or six wins to achieve in any other division - may only take half that amount of time in this one.

“The whole division’s so small right now that it’s definitely close,” said Ferguson. “Chris himself, in the rankings that I looked at, he’s ranked up there with the top fighters at 125, so a good win over him should shoot me up in there. It’s the fight game, and we’re all here to be the best. Nobody’s here to be number four or number five – everybody wants to be number one.”

Josh Ferguson begins that quest for number one on Wednesday. And if he can put on a Fight of the Night along the way, that’s cool with him too. Bottom line, he’s just ready to fight again.

“I’m ready to show my stuff,” he said. “Every fight I’ve had in my life has always been fast-paced and I don’t like to stop. I’m not really worried about trying to live up to anybody’s expectations because I’ve got my own style and my own thing going on and I’m not gonna let anybody down. If they’re looking for a non-stop aggressive fighter that’s gonna get in there and put on a show, that’s what I was born to do. I’ve been living that life since I started training. So this is Fight of the Night material for sure.”