Meet the flyweights of the UFC... 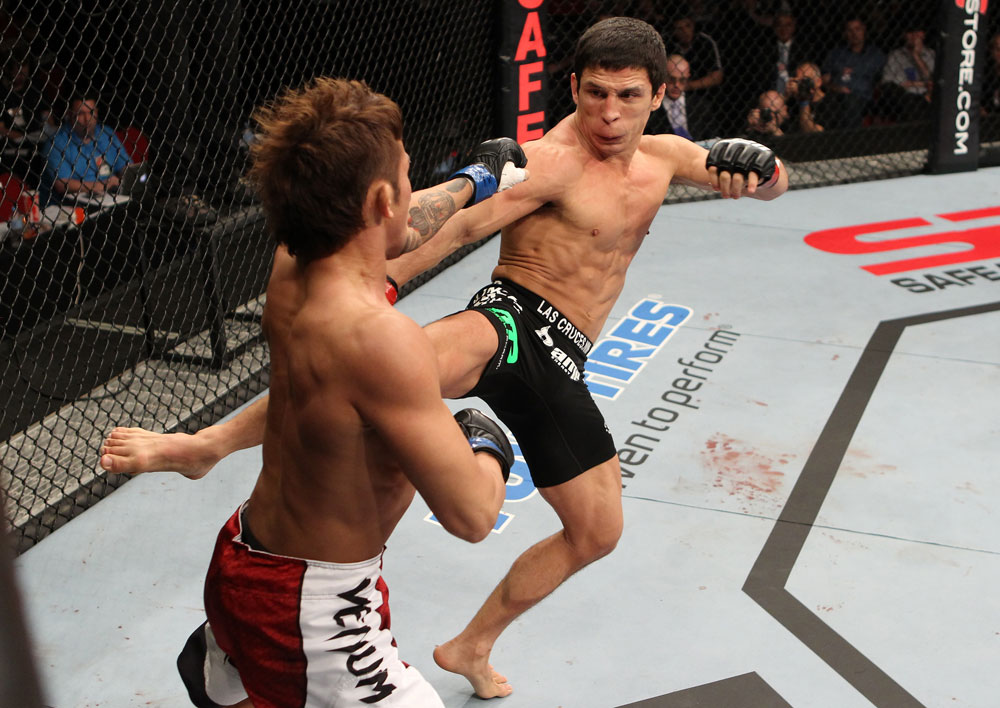 With Joseph Benavidez and Demetrious Johnson leading the way and fighting for the first 125-pound title in UFC history in the co-main event of UFC 152 in Toronto on September 22nd, it’s about time to take a closer look at the flyweight division that has earned nothing but kudos from fans and pundits since its Octagon arrival in March. So here’s your flyweight cheat sheet.

Joseph Benavidez
Next Fight – UFC 152 vs. Demetrious Johnson
Previously one of the top bantamweights in the world, Joseph Benavidez is now looking to nab UFC gold at 125 pounds. Winner of eight of 10 Zuffa bouts (WEC and UFC) with his only losses coming via close decision to 135-pound boss Dominick Cruz, Benavidez has defeated the likes of Eddie Wineland, Miguel Angel Torres, Rani Yahya, and Jeff Curran. Now after his flyweight debut knockout of Yasuhiro Urushitani, he is one win over Demetrious Johnson away from becoming the UFC’s first ever flyweight champ.

Chris Cariaso
Next Fight – TBA
Chris Cariaso made the move 10 pounds south the only way you want to – off a two fight winning streak. And after defeating Vaughan Lee and Takeya Mizugaki at bantamweight, “Kamikaze” Chris made his flyweight debut in style in July, looking sharp in a three round unanimous decision win over Josh Ferguson. Perhaps the most technically sound striker at 125 pounds, Cariaso will be a handful for anyone in the division.

John Dodson
Next Fight – UFC on FX 5 vs. Jussier Formiga
John Dodson has made quite the impression in just two UFC bouts, winning season 14 of The Ultimate Fighter at bantamweight with a first round knockout of TJ Dillashaw last December, and then engaging in an entertaining brawl in his return to flyweight against Tim Elliott in May, a bout he won via unanimous decision. Charismatic and full of energy, Dodson will get a stern test in his next outing against Jussier Formiga in October, but with his record already containing the aforementioned names, plus John Moraga, Yasuhiro Urushitani, and Mike Easton, “The Magician” is not accustomed to ducking anyone.

Tim Elliott
Next Fight – TBA
Missouri’s Tim Elliot began his career at 0-2-1, and things weren’t looking too bright. But then the scrappy southpaw ran off eight consecutive wins, including a knockout of Jens Pulver in 2011 to earn a call from the UFC. His win streak was snapped in a decision loss to John Dodson in May, but his action-packed style, good wrestling, and knockout power have guaranteed him a return to the Octagon, something sure to be welcomed by fight fans.

Jussier Formiga
Next Fight – UFC on FX 5 vs. John Dodson
Before the UFC launched its flyweight division and before Ian McCall handed him the lone loss of his pro career in February of 2011, Brazil’s Jussier Formiga was considered to be the gold standard for 125-pound mixed martial artists. And despite the decision loss to McCall, Formiga’s subsequent five fight winning streak left little doubt that the best flyweight not signed by the UFC was 27-year old from Natal. Well, now he’s here, and when he meets John Dodson in October, get ready for one of the most important non-title flyweight bouts of 2012.

Louis Gaudinot
Next Fight – TBA
A competitor on season 14 of The Ultimate Fighter, Louis Gaudinot first caught everyone’s attention with his bright green hair, but after returning to the flyweight division in May of 2012 and winning Fight of the Night for his three round victory over Brazil’s John Lineker, there’s even more to look at from this rising 125-pound star.

Ulysses Gomez
Next Fight – TBA
Grappling wizard Ulysses Gomez may have lost his UFC debut to John Moraga earlier this month, but the Las Vegas veteran is likely to come back with a fury once he’s returned to the Octagon for fight number two. 9-3 as a pro, the 29-year old still has plenty to offer to the division, and if he gets you to the mat, you’re going to be in trouble.

Phil Harris
Next Fight – UFC on FX 5 vs. Darren Uyenoyama
England’s Phil “Billy” Harris is one of the division’s most seasoned vets, compiling a 21-9, 1 NC record in a career that began in 2003. Bringing a five fight winning streak into his October meeting with Darren Uyenoyama, Harris – who lost a 2005 bout to current featherweight champ Jose Aldo – should make things interesting in the wide-open weight class.

Demetrious Johnson
Next Fight – UFC 152 vs. Joseph Benavidez
A 5-foot-3 ball of energy that tore through the bantamweight division of the WEC and UFC, Demetrious Johnson soared to the number one contender’s spot in 2011 with UFC wins over “Kid” Yamamoto and Miguel Angel Torres. And though he lost a tough five rounder against Dominick Cruz in his title fight last October, the flyweight division allows “Mighty Mouse” to compete on a level playing field against fighters closer to his natural weight, and he showed off his talents in two fights with Ian McCall that saw him battle to a draw and then score a three round victory against “Uncle Creepy.” Now he faces Benavidez for the vacant 125-pound crown next month.

John Lineker
Next Fight – UFC on FUEL TV 6 vs. Yasuhiro Urushitani
22-year old John Lineker has more fights (25) than he’s had years on this Earth, so his UFC debut in May was hotly-anticipated by MMA fans. He didn’t disappoint either, as he went toe-to-toe and blow-for-blow with Louis Gaudinot before getting submitted late in the second round. The bout earned the Brazilian Fight of the Night honors, and his match with Japanese veteran Yasuhiro Urushitani in China later this year (a fight originally on the ill-fated UFC 151 event) could very well produce the same result for the third youngest fighter in the organization.

Ian McCall
Next Fight – TBA
Considered by many to be one of the best flyweights in the world today, California’s Ian McCall has finally found a home at 125 pounds after competing against the best bantamweights in the world for years. A three fight alumnus of the WEC, where he won a stirring TKO over “Ox” Wheeler and went the distance with current 135-pound champion Dominick Cruz, McCall saw a five fight unbeaten streak snapped by Demetrious Johnson in their June 2012 rematch, but “Uncle Creepy” is already plotting his Octagon return.

John Moraga
Next Fight – TBA
Ulysses Gomez may have had the bigger name in the MMA community heading into August 4th’s UFC on FOX event, but former Arizona State University wrestler John Moraga left the Octagon with the win that night, and he did it by impressing everyone who saw him control the standup, keep Gomez from getting the fight to the ground, and then finish things with a barrage of accurate strikes. Winner of 11 of his 12 bouts, with the only loss coming via decision to John Dodson in 2010, Moraga is one to watch at 125 pounds.

Jared Papazian
Next Fight – TBA
If there’s one certainty in the fight game at this moment, it’s probably that the next time we see Jared Papazian, not only will he be in a new weight class, but that he’ll also be doing everything in his power to finish off his opponent. That attitude may sprout from his two UFC bouts at 135 pounds, where he lost a close majority decision to Mike Easton and then got no favors in a questionably officiated submission defeat to Dustin Pague. For the free-swinging Californian, the next bout could be make or break, and he’s got every intention of making it.

Yasuhiro Urushitani
Next Fight – UFC on FUEL TV 6 vs. John Lineker
A Shooto bantamweight (123 pound) champion, Yasuhiro Urushitani has won five of his last six bouts, an impressive run in the veteran’s 10 year MMA career. Owner of wins over recent Ultimate Fighter winner John Dodson, Mamoru Yamaguchi, and Daniel Lima, the 35-year old has ended his last two wins by knockout, and after a loss to Joseph Benavidez in his Octagon debut, he’ll look to get back on track against John Lineker.

Darren Uyenoyama
Next Fight – UFC on FX 5 vs. Phil Harris
Darren Uyenoyama’s 7-3 pro MMA record hides his true experience in the combat arts and his reputation among fight game insiders. In other words, he’s no rookie, and the Ralph Gracie jiu-jitsu black belt showed it in his UFC debut last November, as he dominated “Kid” Yamamoto for three rounds en route to a shutout unanimous decision win. Injuries have kept him from making his flyweight debut, but on October 5th the Strikeforce, Dream, Deep, and Shooto veteran finally returns to mean British newcomer Phil Harris.