Flurry of finishes in Singapore prelims 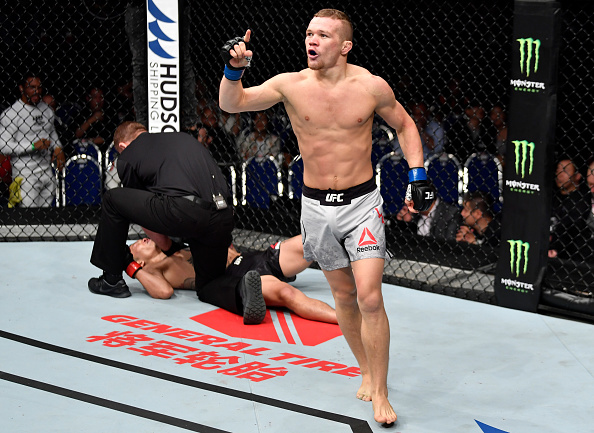 Petr Yan of Russia celebrates after his knockout victory over Teruto Ishihara of Japan in their bantamweight bout during the UFC Fight Night event at the Singapore Indoor Stadium on June 23, 2018 in Singapore. (Photo by Jeff Bottari/Zuffa LLC/Zuffa LLC via Getty Images)" align="center" />
While the action at UFC Fight Night: Cowboy vs. Edwards kicked off in the early morning hours in North America, the athletes stepping into the Octagon inside Singapore Indoor Stadium were wide awake and ready to put on a show.

Six of the nine bouts ended inside the distance and the three that went to the cards were entertaining affairs as well, rewarding all those who got up early to take in the festivities with an electric start to Saturday’s event.

Arriving with a ton of fanfare, Yan made good on his advanced billing, melting Ishihara with a series of clean, heavy punches along the cage in the closing moments of the opening round.

Stalking Ishihara from the outset, Yan quickly popped to his feet after a surprising takedown put on him on the canvas and once he found his range, the bantamweight newcomer found a home with his punches. While Ishihara looked to recover from the first blow that felled him, Yan didn’t give him any room to breathe, swarming with more power and putting him back on the canvas for good seconds later.

Backing up the hype in your promotional debut can be a challenge, but it was no trouble for Yan, who became the first man to stop Ishihara with strikes and extended his winning streak to four while making an immediate impact in the 135-pound weight division on Saturday night.

Just 20-years-old, Song Yadong has quickly established himself as one of the best young prospects in the UFC.

Seven months after collecting a first-round submission win over Bharat Khandare in his promotional debut, “The Terminator” returned to the Octagon, took a considerable step up in competition and showed out against Arantes, dominating the more seasoned Brazilian before flooring him with a hellacious elbow off the break that brought the fight to a sudden halt.

Those are the little elements that separate good fighters from great fighters and while it’s very early, Song continues to show that he’s someone with obvious upside and a ton of potential in the featherweight division.

No pair was more heated with each other in the build to Fight Night than Dy and Young as the featherweights jawed with each other from the time the bout was signed through the weigh-ins on Friday. When the cage door closed on Saturday, those tensions came spilling out, producing an action-packed affair inside the Octagon.

Young wanted to make an impression in his first appearance on a full fight camp after dropping a short-notice decision to Alexander Volkanovski in his debut and the New Zealander did just that, constantly staying in Dy’s face, busting him up and knocking him out in the final seconds of the middle round with a short elbow that dropped Dy where he stood.

Tough as nails and eager to sling, this was a breakout performance for the intense and entertaining new addition to the featherweight ranks.

Having spent the previous three years on the sidelines, Aldana had no interest in engaging in a feeling out process or throwing anything other than smoke in his long-awaited UFC debut and Song was more than happy to join him in power shot showdown.

Color commentator Dan Hardy called this a game of Russian Roulette as Song and Aldana traded big shots in the center of the Octgaon and “The Outlaw” was proven correct. In the waning moments of the second round, Song connected with a right hand to the temple that sat Aldana down and from there, the Chinese welterweight quickly and efficiently pounded out the finish.

There was plenty of positive moments for Aldana, especially in his first fight off the shelf, but the night belonged to Song, who used his sledgehammer right hand to collect his second consecutive stoppage win under the UFC banner.

Matthews’ delivered the most impressive performance of his career on Saturday, continuing his successful transition to welterweight by quickly dispatching Anzai.

After defending an early takedown attempt from the Japanese wrestler, the young Australian connected with a knee to the head on the break before hitting a knee tap that put Anzai on his back. From there, the promising 23 year old started delivering a series of elbows until Anzai gave up his back, at which point, “The Celtic Kid” floated to the back, clamped onto a rear-naked choke and put “The Animal” to sleep.

Now 3-0 since relocating to the welterweight division, this was the kind of blistering performance that will force people sit up and take notice of the talented Australian and set him up for bigger opportunities in the second half of the year.

After making the successful transition into the Octagon with a victory over Kailin Curran, a late change in opponents landed Yan in the cage with Pereira, a highly touted Brazilian fighter looking to bounce back after suffering the first loss of her career.

Despite the sudden, short-notice step up in competition, the Chinese newcomer showed she’s one to watch in the 115-pound ranks, using a strong opening round to set the pace for the contest and carry her to a unanimous decision victory.

While Pereira had flashes and landed flush with a handful of power shots, Yan took it well and the steady diet of low kicks and sharp punches she handed out produced a clean sweep of the scorecards and earned her a second straight UFC victory.

Swift hands were on display in this third consecutive flyweight fight to begin Saturday’s festivities in Singapore, as Schnell and Inoue took turns popping each other with quick, clean shots throughout this entertaining tactical contest.

Where Schnell mixed in low kicks and scored with hooks, Inoue kept it fundamental, working behind a precise jab and following with crosses when there was room. Over the course of 15 minutes, the duo combining to produce three ultra-close rounds that made the judges difficult job even tougher.

In the end, the power shots and combinations offered by Schnell proved to be the deciding factor, as “Danger” emerged on the happy side of the split decision verdict, handing Inoue the first loss of his professional career.

Working with the Serra-Longo Fight Team for the second time, Sasaki crashed across the cage right out of the chute looking to wrestling, grounding Lausa within the opening 30 seconds. It would become a recurring theme throughout the contest as the tall, smothering Sasaki kept Lausa on the canvas throughout the first before eventually getting him down and choking him out in the second.

Sasaki’s length and savvy on the ground spelled the end for Lausa, as the 28-year-old Japanese talent was able to control his positioning and bait his Filipino foe into giving up his back, where he quickly sunk in the rear-naked choke to earn the finish.

Flyweights got the action underway in Singapore as South Korea’s Kim squared off with TUF 26 alum Fabian in the opener, with the former looking to build upon her split decision win over Justine Kish and the latter angling for her first UFC victory after battling DeAnna Bennett to a draw in her Octagon debut.

The women kept it standing throughout, with Kim favoring power shots to Fabian’s more varied Muay Thai offerings. While both fighters had their moments, the power shots of Kim that snapped Fabian’s head back and left her bruised and battered proved to be the difference, with the South Korean earning a split decision victory to collect her second consecutive victory.