Florian Not Concerned About Being the Bad Guy

“I’ve been booed before, fighting in Roger Huerta’s hometown in Minnesota [at UFC 87]. I actually like it.” - Kenny Florian 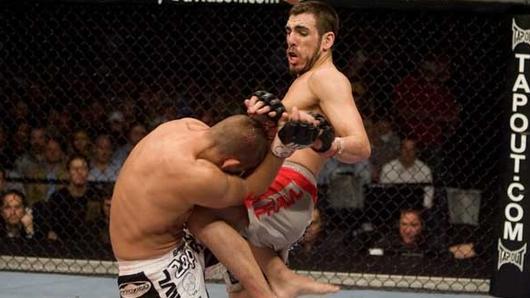 Kenny Florian is, by all accounts, a very likable guy.

An intelligent, respectful martial artist who lends his expertise to ESPN’s MMA Live when he’s not teaching at his school in Brookline, Massachusetts, or training for his own exploits in the cage, Florian has been a favorite of UFC fans since his Octagon debut as a middleweight on the first season of The Ultimate Fighter, using both his famously sharp elbows and his slick rear naked choke to produce 11 UFC wins.

However, it’s safe to say that when Florian heads to the Octagon on Saturday night at UFC 131 to take on Diego Nunes, he won’t hear his usual complement of cheers from the crowd at Rogers Arena.

With the Boston Bruins facing the Vancouver Canucks in the NHL’s Stanley Cup Finals, just about everything from Boston is out of favor in British Columbia these days, to the point where the Boston Pizza restaurant chain changed the name of its locations in the province to “Vancouver Pizza” for the duration of the series. In that climate, KenFlo is expecting a rough reception when he walks out from his locker room, especially when Bruce Buffer announces him as “fighting out of Boston, Massachusetts.”

“I hope that the fans look at the fighter more than anything else,” Florian said. “It always sticks out when anyone cheers ‘USA, USA’ at a fight. That has nothing to do with it. Get behind a fighter because of who he is and who he represents, not where he’s from. I respect the Vancouver Canucks, and I respect people in Vancouver. They’re never going to boo somebody because they’re from a different town, but we live in a simple world and I’m expecting boos when I walk in there because of where I’m from.”

If he wanted to try to appease the fans in Vancouver, Florian would have options, as the Canucks have two of his fellow Boston College alumni on the roster in defenseman Andrew Alberts and goaltender Cory Schneider. However, Florian has no intention of downplaying his Beantown roots to get a better reaction. After all, while he’s nothing like his TUF housemate Josh Koscheck when it comes to drawing UFC fans’ ire, he has no problem handling hostile responses when they do come.

“I’ve been booed before,” Florian said, “fighting in Roger Huerta’s hometown in Minnesota [at UFC 87]. I actually like it. There’s a lot less pressure when you’re being booed than when you’re being cheered, I think. It definitely motivates me.”

Rogers Arena hasn’t been friendly to visitors from Boston this month – the Canucks won the first two games of the series on home ice before the Bruins won the third game in Boston on Monday night – but after a strong training camp, Florian is determined to do much better in his featherweight debut.

Much of Florian’s training for the fight with Nunes took place with Firas Zahabi at Tristar Gym, which had its own intersection with the Stanley Cup Playoffs. The Bruins faced the Montreal Canadiens in the first round, which made for some interesting conversations before and after training during KenFlo’s regular trips to Montreal.

"We do grill each other about the games," Zahabi said, "but always in good fun, since it’s obvious to both sides that the Canadiens really are the best."

The other locals at Tristar likely hold the same opinion as their coach, but Florian had the last laugh when the Bruins won the series, and traveling back and forth between Montreal and Boston even gave him the opportunity to witness part of it in person.

“I got to go to both a game in Montreal and a game in Boston,” Florian said. “It was pretty cool.”

Florian’s schedule has put him in the right place at the right time once again, as the fifth game of the series will start mere hours after Friday’s weigh in, with the teams tied at two games apiece. This time, however, KenFlo will likely be too focused on Nunes to go to the game.

“I’m going to be pretty darn focused on the fight itself,” Florian said. “Between the weight cut and everything else that I’ve got going on, it’s best if I stay home, but we’ll see.”

Indeed, after a difficult weight cut, Florian would do well to focus on recovering after the weigh-in, making sure that he’s at his best when he takes on Nunes. In fighting at 145 pounds, KenFlo will become the first fighter in UFC history to compete in four different weight classes over the course of his career, and getting there certainly hasn’t been easy.

“It’s been going really well,” Florian said, “but I really have been eating so clean for so long. At this point, it sucks. It’s been very difficult. I don’t think a whole lot of fighters would be able to do what I’ve done.”

Still, even if Florian will be too focused on preparing himself for Saturday’s fight to attend the game, he still plans on finding a way to support his hometown team on Friday in Vancouver.

“A good buddy of mine, Shawn Thornton, plays for the Bruins,” Florian said. “He’s been a big supporter of me and MMA, and I’ll probably be rocking his shirt at the weigh-ins.”

That fashion choice probably won’t go over particularly well with the fans at the weigh-in, but for a fighter who broke into the UFC by showing no fear against bigger, stronger opponents, it’s hard not to identify with a team taking on an opponent that was the NHL’s best in the regular season, especially when that team plays a short T ride away from the Florian Martial Arts Center.

“They’ve been the underdogs all along,” Florian said of his hometown Bruins. “I’ve been an underdog throughout my career. The Vancouver Canucks have, probably, the best team in hockey, but like the fight game, the best team doesn’t always win. It’s the guys who show up that night.”

And when Kenny Florian shows up at Rogers Arena on Saturday night, he’ll do his utmost to make sure that at least one Bostonian comes home victorious from Vancouver.