"Aldo’s been the aggressor, Aldo’s been the one going forward, and everyone’s been afraid of him. And I don’t think Hominick, with all his experience, is gonna be afraid." - Kenny Florian 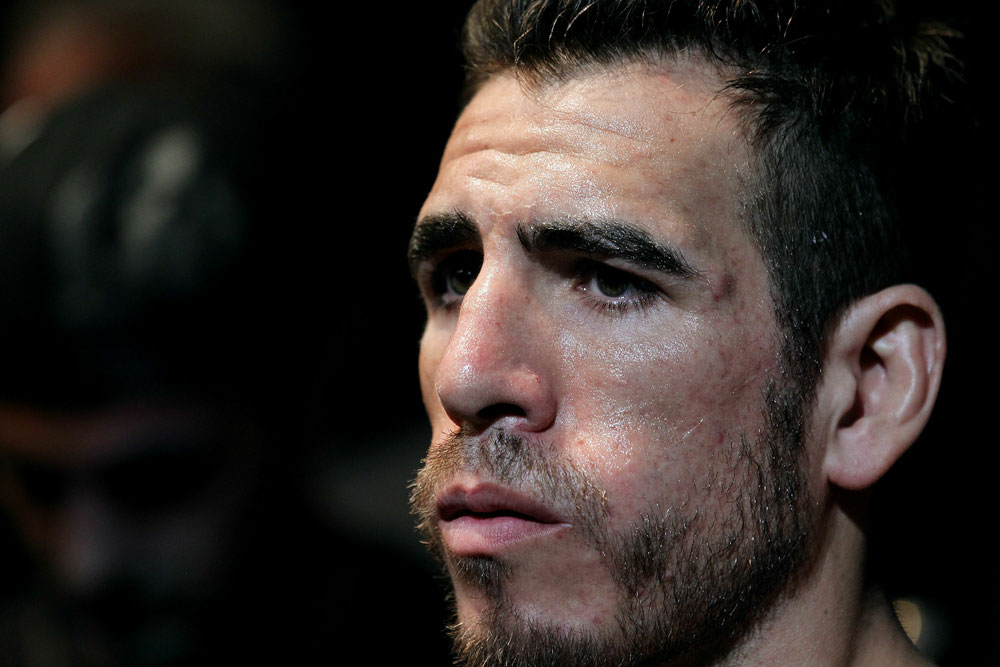 As an ESPN analyst, Kenny Florian knows a little something about breaking down fights. But as UFC 129 approaches on April 30th, “KenFlo” will be even more observant than usual when featherweight champion Jose Aldo defends his UFC crown against Ontario’s Mark Hominick.

That’s because the next time you see the former middleweight, welterweight, and lightweight in the Octagon, he will be competing 10 pounds south in the same division as the combatants in the UFC 129 co-main event, making this a scouting trip, so to speak. And while Brazil’s Diego Nunes is up first for him at UFC 131 on June 11th, he’s got plenty to talk about when it comes to the first featherweight title fight in organization history.

“People are not giving Hominick the credit that he deserves,” said Florian. “And you have to look back at the history of who Aldo has faced. These weren’t very dangerous strikers that Aldo has gone against, and he’s picked these guys apart on the feet. In Hominick you have a very, very good striker, a guy with some of the best hands in the sport, let alone at 145, he’s very fast and he loves to pressure his opponents, and that’s one thing that Aldo really hasn’t had. Aldo’s been the aggressor, Aldo’s been the one going forward, and everyone’s been afraid of him. And I don’t think Hominick, with all his experience, is gonna be afraid and give him a chance to really get off. I think Hominick’s gonna go after him and really test his striking ability. Where Hominick is gonna be lacking is in the kicking game. That’s where Aldo has really done his most damage, so he’s really gonna have to be careful there.”

If it sounds like Mr. Florian has been doing a little studying of his new comrades at 145 pounds, that’s probably an accurate statement. But then again, the Massachusetts native has always been a cerebral fighter who has a gift for not only breaking down future fights, but for looking back and analyzing what has already happened, making him the perfect person to discuss UFC 129 in terms of what Hominick and welterweight contender Jake Shields will be looking at as the challengers in their first UFC title fights.

Back in 2006, Florian faced veteran Sean Sherk for the vacant UFC lightweight title. He was a year and a half removed from his stint as a middleweight on the first season of The Ultimate Fighter, and now was 30 pounds removed from that division and facing the aptly-nicknamed “Muscle Shark.”

“You knew it was a huge fight,” recalled Florian. “There were definitely a lot more media obligations, a lot more cameras in your face, and I think I was almost too young in the game to realize the pressure, but you knew it was a much bigger fight. Now you look at the sport and where it’s at, and it’s gonna be ten times bigger than that.”

Considering that a record 55,000 fans will be packing Rogers Centre in Toronto on April 30th, it may be even bigger than that. It’s an atmosphere no fighter can really prepare for. Sure, a lot of veterans have fought in front of huge crowds in Japan, but the fans there are a lot quieter than those in Canada or the United States. This is uncharted territory for guys like Hominick and Shields, and while they both have experience in the spotlight, doing it under the UFC’s particular brand of spotlight is a whole other animal, especially on fight week.

“When you’re there on fight week is when you realize that this is it – this is for the title, you’re there, and you’re there to do work,” said Florian. “When you arrive in the city, there are all the different obligations you have with the UFC and the interviews, and in the training sessions leading up to the fight, you realize that the whole training camp was for this, and it’s tough, even if you’re used to doing it, and it gets tiring. You gotta remember that these guys are at the end of their training camp, so by this time, their bodies are very tired, they’re ready to go, they’re cutting weight so they’re gonna be irritable. And then there’s the pressure, of course, of the impending fight, and it can definitely wear on you. It’s all the little things - you’re short on food, sort on patience - and it can add up.”

One advantage Hominick and Shields do have over other first-time UFC title challengers is that they’ve been the five round championship distance before – Hominick in a five round decision loss against Hatsu Hioki in a 2007 TKO bout in Canada, and Shields in back-to-back wins over Jason “Mayhem” Miller and Dan Henderson in Strikeforce middleweight title bouts in 2009 and 2010, respectively. That was virgin territory to Florian against Sherk though.

“It’s always a little scary because you can say I’m gonna try and take this to the fourth and fifth rounds, but you can’t predict the pace of which the fight is gonna start and finish,” he said. “Those are things that can be difficult to prepare for even though you do the best you can in your training and your conditioning. But there’s no doubt about it, having gone five rounds is an advantage to both of these fighters (Hominick and Shields). Knowing that they’ve gone five rounds is huge for them confidence-wise, and knowing that they can physically push for five rounds against good opponents and being able to pace themselves for five rounds, those are all huge, huge factors.”

Florian lost his first title bout, dropping a bloody and hard-fought decision to Sherk at UFC 64. He ran off six consecutive wins after that defeat, earning a 2009 shot at the crown, which was now held by BJ Penn.

“I definitely feel like I had a better grasp on how to approach things and how to be a little more calm,” he said of his second title shot. “My situation was a little tricky because the way I approached the Sherk fight was not as professional as I should have, so maybe I overdid it a little bit with the BJ fight as far as my training and maybe did too much. There are a couple different ways these guys can approach it, and peaking for a fight is a very difficult thing, especially for a five rounder because now instead of doing three and four rounds in training, you’re doing five and six rounds, so how does that add up over your training camp? And the more time you have, like I did – and my problem is staying out of the gym – it comes down to being able to balance that, and that can be a tough thing for a fighter.”

After a strong start, Florian was submitted by Penn in the fourth round at UFC 101, so when you ask him if the third time will be the charm, he laughs.

But all kidding aside, Florian does believe that at featherweight, he has finally found a home where he can unleash all his tools and eventually strap that elusive championship belt around his waist.

“I’m definitely gonna be a way more well-rounded guy,” said Florian when asked what we should expect from him at 145-pounds. “My wrestling’s gonna be much, much better and it’s something I’ve been working on very diligently since the Gray Maynard fight. I’m not only gonna be skinnier, but I think I’m gonna be doing some old things that I used to do that I didn’t do in my last couple fights. I’m just gonna be way more active, and you’re gonna see a lot of variety, a lot of excitement, and a guy with more weapons.”