Flashback to 2005 when Diego Sanchez met Nick Diaz at The Ultimate Fighter 2 Finale
By Thomas Gerbasi, on Twitter: @TGerbasi • Apr. 29, 2020

How do you pick one Diego Sanchez story for the #UFCEra series? That’s like trying to choose your favorite child. It’s almost impossible. So I decided to make it easy and go back to the beginning. November 2005, and Albuquerque’s “Nightmare” was about to take his big step-up fight against Nick Diaz. And like Stockton’s finest, when it comes to Sanchez, sometimes you turn on the recorder and just let them go.

For most people, following in the Albuquerque footsteps of local icon and former world boxing champion Johnny Tapia would be a daunting task…

Choosing to travel the same road walked by another legend, Rickson Gracie, would be just as intimidating…

And frankly, most people wouldn’t pick one of the toughest young guns in the welterweight division, Nick Diaz, for only their third bout in the UFC Octagon…

But Diego Sanchez isn’t most people, and he isn’t shy about letting you know that either.

The confident 23-year-old from New Mexico is well aware that he’s taking a huge step in his career this Saturday when he faces Diaz on Spike TV, but that’s just the way he wants it.  Jeez, he’s already got his eyes on UFC welterweight king Matt Hughes.

“I feel that I’m the number one guy in the 170-pound division,” said Sanchez, the middleweight winner in the first season of The Ultimate Fighter.  “People don’t understand it when I say that I feel that I’m the best in the world and that I’m pound for pound the best.  They’re just like, ‘he’s cocky, and he shouldn’t be saying that because he hasn’t proved it.’  But in my heart, I’m 18-0, I’ve been doing this since I’ve grown up, no one’s ever put a whuppin’ on me, and I see my true potential.  That’s why I’m here.  I’m not here to be the fifth best or the second best in the world.  I’m here to be the best in the world, hands down.  If I set my expectations lower than that, I wouldn’t be a champion.  So yes, I believe I’m ready.  The one person I want to fight more than anybody is Matt Hughes, and I truly believe in my heart that I have a date with destiny with Matt Hughes, and he’s not gonna get beaten until I get in there and I beat him.”

For a writer, comments like that are gold. For a fighter, it can not only gain you enemies in a rapid-fire fashion, it can put a giant neon bullseye on your back.  Sanchez believes such a mindset is necessary – not simply to compete, but to be the best.

Sanchez has met his hero a number of times, and he takes inspiration from him daily, even though he has never trained under him.

“He (Gracie) told me one day a week in the gi, so I’m getting a gi and doing that one day a week from now on,” he smiles.  “I look up to him in several ways, especially the way that he carries himself as a person – mind, body, and spirit.  It’s the warrior mentality.  Nowadays, a lot of fighters are losing that.  I’m glad that people are losing that because there’s got to be the guys that get in there and get beaten and there’s got to be the guys that are living on to be champions.”

If Sanchez wants to face someone with a warrior’s mentality, he needs to look no further than the man standing across the Octagon from him Saturday, the highly regarded Diaz.  And while the matchup of 20-something welterweights is intriguing just on the merit of skill alone, the fact that there’s a little bad blood between the two doesn’t hurt.

“Nick Diaz has done good in the UFC, his only loss is to (Karo) Parisyan, but basically, he’s just jealous,” said Sanchez.  “I came in, I did the show, I dominated and I won the contract – so therefore I was making more money than him and mainly, that’s the real thing.  It’s just a little jealousy there and that’s what it comes down to.  I don’t know why he’s acting like it’s so personal.  But, he gets his chance (on Saturday), and I’m here to stand right in front of him. I’m here to stay and there’s nothing he can do that can change that.” 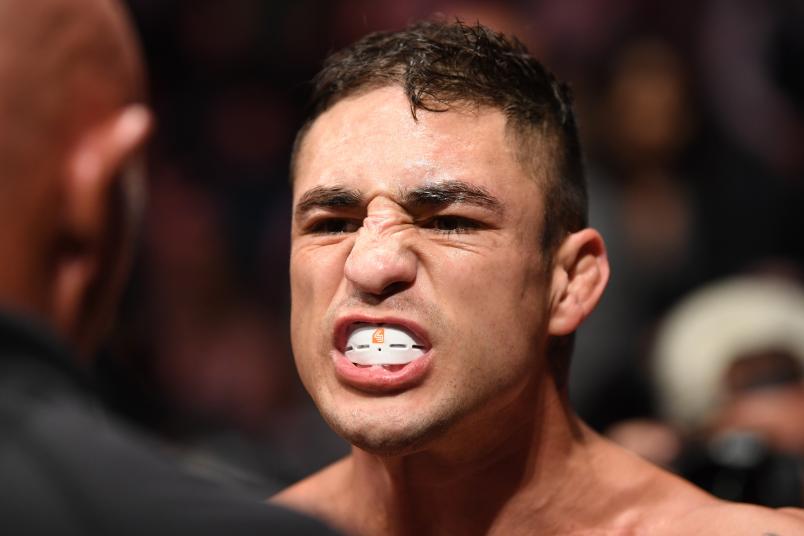 Of course, in this or any sport, emotions can lead to a loss of focus once the bell rings.  Sanchez insists that he won’t let it get the better of him.

“I grew up my whole life going through drama and stuff like this,” he said.  “I’m a professional at my job; fighting is what I do and it’s not a street fight.  It’s not a personal confrontation.  I’ve gone in there and fought (Josh) Koscheck who was my friend, (Josh) Rafferty that was my friend, even (Kenny) Florian that was my friend, and ever since fighting those three guys that I was personally close to, after that it’s like nothing.  It’s business when I go in there.  I look at this as my career, as my life.  I’ve got my mom and my dad – my dad who works construction – and I want to have money for them to retire.  I want to end all the hard work and I want to be there for stuff like that.  I think about the reasons why I’m fighting and stuff like that.  So a little thing like that - trying to distract me by getting me mad – that’s not gonna throw me off my goal.”

So what’s the trigger then?  What causes a nice kid like Sanchez to turn into a fighting machine on fight night or makes him finish a fight with extreme prejudice like he did in his last bout against Brian Gassaway on August 20th?

“To me, it’s a science and it’s an art,” he said.  “And this is my art.  It’s my body, my mind, and my spirit, and when I go into the ring I look at it as war. I look at it like he’s trying to take my job from me, trying to take the money I’ve put on the table for food, and basically trying to take my life away.  So when I go in there, I go in there with the mentality that once they lock that door, I’m going in there and fighting for my life.  And when you’re fighting for your life, what else do you got?”

“I was born to do this stuff,” Sanchez continues.  “I’ve been fighting since I was a little kid and it’s always been me.  There’s a little trigger switch that just goes off and then it’s the nightmare.  And that’s the pleasure of fighting.  To me, it’s a gift.  I don’t get to unleash on my training partners, I don’t get a fight often and that’s what I love to do.  So once they lock that door and I’m in there, I get the treat that I worked so hard for – putting in the roadwork, putting in the hours of endless training and dieting, and the two months out working so hard, and for me, all the years of working so hard, all the injuries I’ve gone through.  Everything is to get that feeling when I’m in there.  And I think some people, like Nick Diaz, take advantage of the blessing they get of being able to fight.  I can be in a wheelchair tomorrow, I can get hit by a car, it could be my last fight, and that’s the way I look at it when I go in there.  I’m never holding back, and I know that every time I step in that ring I have to be exactly mentally prepared to give it 110%, not choke, and if there’s any opportunity in the fight, I have to take that opportunity.”

And when the opportunity to fight Diaz presented itself, Sanchez jumped at it.  It’s easy to see why, because not only is it a chance to defeat an established contender, it also allows Sanchez to put the ‘overnight sensation’ tag a little further back in his rear-view mirror.  Not that he resents that connotation, which doesn’t take into consideration his participation in Jiu-jitsu competitions and on numerous King of The Cage cards before his debut on the first season of The Ultimate Fighter.

“It’s not that I resent it, because everything that I got, I’m very happy for,” he said.  “I’m happy for the series, happy for the exposure; I’m happy that people got to see me for who I am.  Of course there are gonna be ups and downs, but look, I got a good contract with the best company in the world; I’ve got great bosses and people who are in charge of my company and I feel like I’m in good hands.  Yeah, there are people out there who are gonna say I’m an overnight sensation and this and that, but that’s why I’m here, to prove all those people wrong and show them what I’m all about.  I have determination, hunger, and drive.”

He’s also got the fans of Albuquerque in his corner, something you’ll hear on Saturday night.

“The people are totally behind me, and they took a new love to the sport of mixed martial arts,” he said.  “I got a lot of fans and a lot of people that are backing me.  It’s amazing, with a seven hour drive, how many people actually will love to take that drive.”

They take that trip because they know Sanchez is going to give them a fight.  But to get to that point, there’s a lot of blood, sweat, and tears that don’t get the same type of exposure as the finished product.  And Sanchez has been putting in the hours, even bringing in boxing coach / dietician / strength coach Robert Garcia (who works with Oscar De La Hoya) to keep him in tip-top shape, and sparring with 2000 Mexican Olympian Francisco Bojado to improve his standup work even more.  That doesn’t mean he’ll be swinging for the fences against the heavy-handed Diaz though.

“A lot of people have underestimated my hands my whole career, but I’m a smart fighter – I’m not trying just to entertain,” said Sanchez.  “If there’s an opportunity and I see a takedown, I’m gonna take it.  If I see a clinch, I’m gonna take it.  I’m not gonna stand there and trade shots with the guy if I don’t have to.  But when the time comes, it will come, and somebody will put their hands down – Nick Diaz might – and a knockout may come.”

If that happens, everyone may just have to take a deep breath, step back, and re-evaluate the brash comments of one Diego Sanchez.  Because if he continues to deliver, there will be no ignoring ‘The Nightmare.’