Chuck Liddell faced Vitor Belfort in Las Vegas in what was a pivotal event for the sport.
By Thomas Gerbasi, on Twitter @tgerbasi • Apr. 26, 2020

It wasn’t the biggest UFC card of all-time, but the importance of the UFC 37.5 event in Las Vegas can’t be dismissed, as the June 22, 2002 event not only aired on Fox Sports Net’s “The Best Damn Sports Show Period,” which was a big deal at the time, but it also featured a pay-per-view worthy main event between Chuck Liddell and the returning Vitor Belfort. 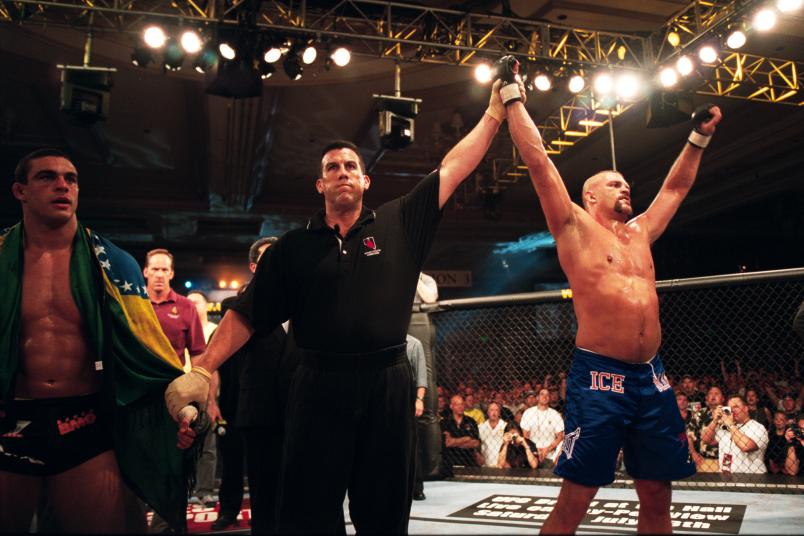 Number one UFC light heavyweight contender Chuck “The Iceman” Liddell left no doubt as to who the next challenger for Tito Ortiz’ title should be, as he outpointed returning superstar Vitor Belfort over three rounds to win his ninth consecutive bout.

“I thought if I kept pressing him I could take the fight away from him,” said Liddell.

Scores were 30-27 twice and 29-28. The fight was Belfort’s first in the UFC since a first-round knockout of Wanderlei Silva in October of 1998.

Liddell opened the bout with a head kick, but Belfort was able to block it. Surprisingly, Belfort’s first dose of offense were two takedown attempts, both of which he nailed. Liddell fought well off his back though, landing some strikes before he used the fence to get back to his feet at the midway point. Still locked up, Liddell pinned Belfort to the fence and landed close range strikes before breaking loose with a minute left. Belfort finished the round with another score, a hard leg kick.

After the close first round, Liddell went on the attack, stalking Belfort as the Brazilian looked to counter. A right hand jarred Belfort and prompted him to tie up. Liddell took the dominant position against the fence though, and he landed a series of knees before referee John McCarthy broke the two at the midway point. A spinning back kick by Liddell got the crowd roaring, and Belfort came back with one of his trademark flurries, even ending the round with a kick to the head in order to try and steal the round.

The 205-pounders traded leg kicks early in the third, and Liddell missed a spinning back fist as he mixed up his assault. The big shots were coming faster now, as Liddell and Belfort traded home run swings, but it was “The Iceman” who got the last word with a counter right hand in the midst of a furious exchange that sealed the decision for the Californian with less than two minutes left. 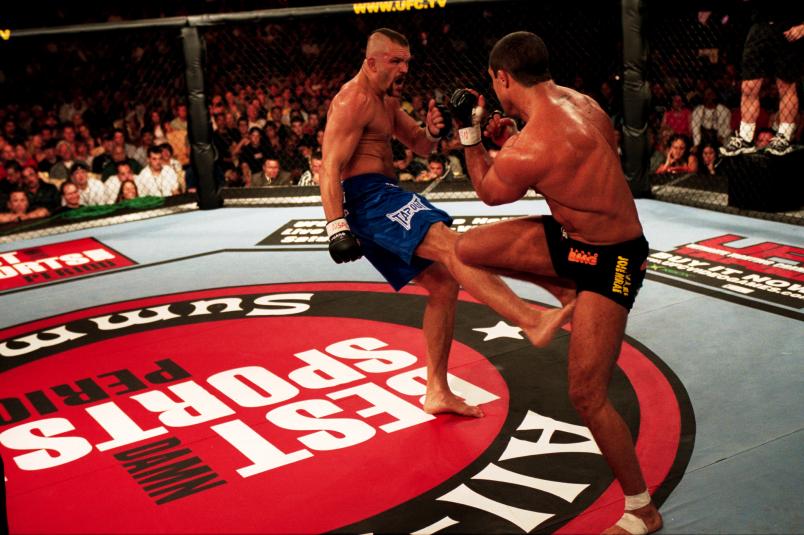 Prodigious knockout artist Robbie Lawler survived a spirited effort from seasoned competitor Steve Berger and delivered some thunder of his own in response, using a right hand to drop Berger and a follow up barrage to finish him on the ground at 27 seconds of round two.

Muay Thai ace Pete Spratt showed off his submission game in his bout with wrestler Zach Light, surviving a ground-and-pound assault to lock in an armbar and force a tap out at 2:22 of the first round.

Veteran Tony Fryklund ruined the UFC debut of Marco Ruas’ nephew Rodrigo, pounding away with ground strikes that bloodied the Brazilian and forced a stoppage at 3:34 of the second round.

The opening lightweight bout between highly regarded Yves Edwards and Joao Marcos Pierini ended in abbreviated fashion when an injury forced a halt to the bout at 1:19 of the opening round.

A right high kick from Edwards sent Pierini hard to the mat, but after the Brazilian rose, he wasn’t able to continue due to a shoulder injury, rendering Edwards the TKO winner.