Today we flashback to 2016 an article written about the passing of UFC legend, Kevin Randleman
By Thomas Gerbasi, on Twitter: @TGerbasi • Apr. 25, 2020

February 11, 2016 was a tough day for all mixed martial arts fans. Former UFC heavyweight champion Kevin Randleman passed away much too soon, and having covered him for so long, it hit home even more.

I had been a fan of MMA since my father bought the first UFC pay-per-view back in 1993, but it wasn’t until I conducted my first interview with Randleman that I said, “Yeah, I’m gonna stick around in this whole MMA thing.” He was everything you usually didn’t get in pro sports: opinionated, emotional, unfiltered and willing to verbally spar with anybody. And as good as he was on fight night, he was even more unforgettable when he was speaking his mind.

We had our battles over the years, but the last time I ran into him in the host hotel after one of the UFC’s European events, all was forgiven, even if he did choke me briefly.

You are missed, Mr. Randleman. Here’s a little something I wrote after his passing.

A former UFC heavyweight champion whose athleticism and wrestling acumen was matched by his charisma and intensity, Kevin Randleman sadly passed away on February 11 due to complications from pneumonia. He was 44.

One of 11 children, Randleman, like his good friend Mark Coleman, starred in wrestling at Ohio State University, even doing “The Hammer” one better by winning two NCAA Division I national championships.

Following his college wrestling career, Randleman entered the world of mixed martial arts in October of 1996, making his bones by fighting – and winning – three fights in one night in a Vale Tudo event in Brazil.

After eight fights in Brazil, Randleman got the call to the UFC in 1999 and made an immediate impact, defeating former heavyweight champion Maurice Smith. Two months later, Randleman was fighting Bas Rutten for the vacant title, but he lost a controversial decision to the future Hall of Famer.

When Rutten vacated the title, Randleman was back in a title fight, and this time he left no doubt at UFC 23 in November of 1999, as he defeated Pete Williams. “The Monster” would successfully defend his crown against Pedro Rizzo but he was dethroned by Randy Couture in November of 2000. 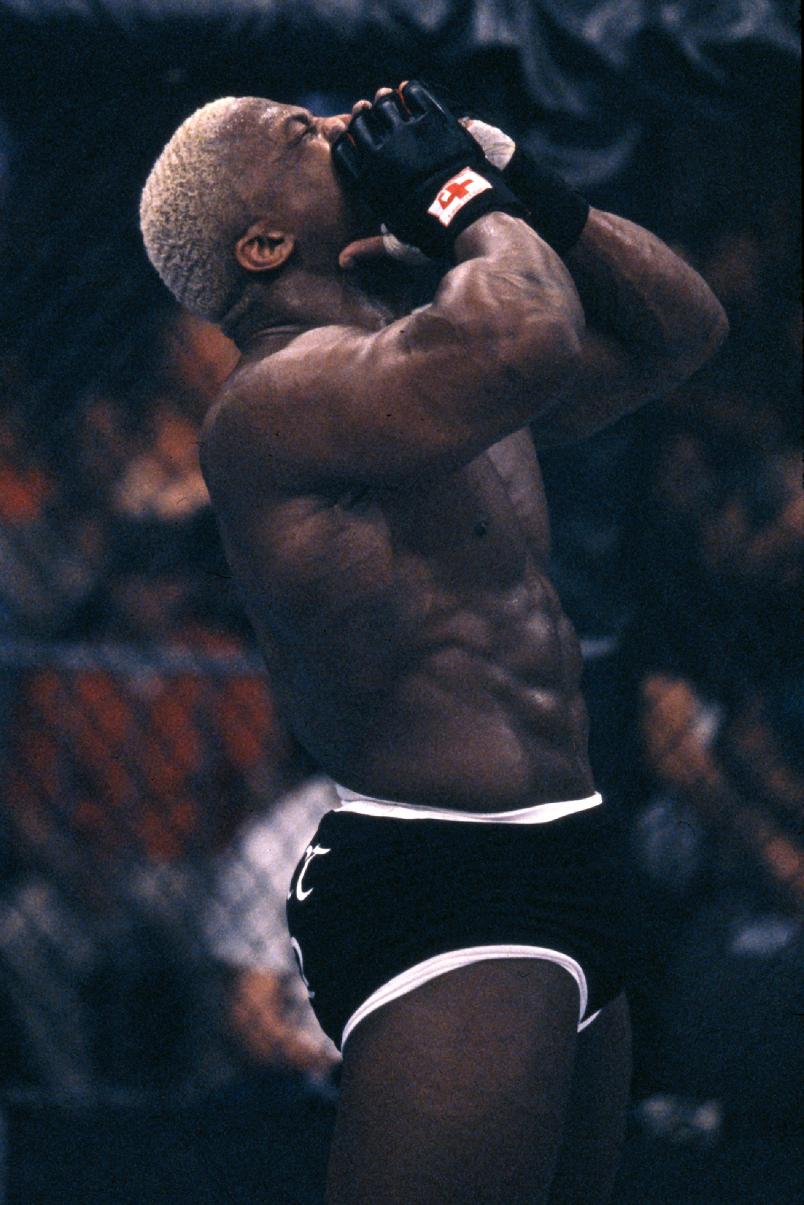 Moving to the light heavyweight division, Randleman was knocked out by Chuck Liddell at UFC 31. And though he would only fight once more in the Octagon, he left on a winning note, decisioning Renato Sobral at UFC 35.

The fighting days of “The Monster” were far from over, as he went to Japan and became a star in the PRIDE organization, where he fought 11 times from 2002 to 2006. Among his highlights were a knockout win over Mirko Cro Cop in 2004 and a suplex heard ‘round the MMA world that he pulled off in a losing effort against Fedor Emelianenko.

Following a defeat to Baga Agaev in 2011, Randleman retired, but he was a staple at MMA events in the ensuing years, always quick with a smile and a handshake for his legion of fans. And while his sudden passing is a tragedy, his wife Elizabeth, his children, and the rest of his family and friends can take solace in the fact that there was only one Kevin Randleman and that he made a mark no one will ever forget.

Those are the facts. But just like wins and losses and the nuts and bolts of a person’s career never tell the full story, they really don’t do justice to Randleman and his impact on the sport of mixed martial arts and those in it.

In a lot of ways, you could say I wouldn’t be on the path I’m on if not for Kevin Randleman, who was the first mixed martial artist I ever interviewed. Just starting to work on content for Bruce Buffer’s website, the “Voice of the Octagon” suggested Randleman as a subject for a story. 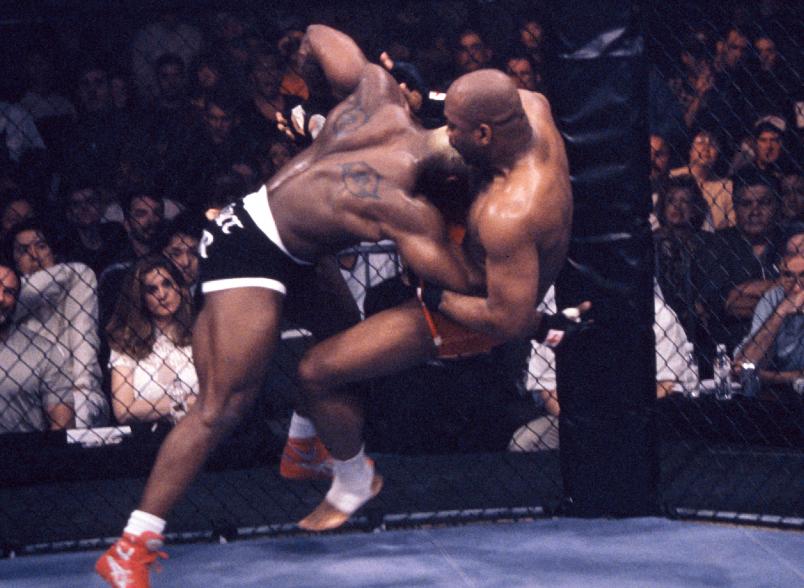 Of course, I was interested, as “The Monster” was always larger than life, even if he only stood at 5-foot-10. Despite his height, he was built like a superhero, and when he got into the Octagon, his warm up was comprised of jumping in the air, knees raised, nearly clearing the cage as he did so. It was like he came straight out of a video game, and if you ever used Randleman as a character in the early UFC games, you will know what I mean, as his high kick was always a move no opponent could defend. Add in the bleached blond hair, his legendary intensity, and he was someone you wanted to know more about.

When I was approached about doing the interview, Randleman was about to defend his UFC heavyweight title for the second time against Randy Couture, but word was that he wasn’t talking to anyone because he was having issues with SEG, the company that owned the UFC at the time. Buffer made it happen though, and as soon as I got on the phone with Randleman, it turned into a chat I would never forget. Anyone who ever interviewed him would agree that talking to him was a unique experience, filled with passion, tales of his harrowing early days in Ohio, jokes and yeah, some fighting as well. With Randleman, nothing was off the record, and he hit hard with everything he said on every topic.

After that talk, it was clear that I was going to stick around in the MMA world.

“I'm a fighter,” Randleman told me in that first interview. “I'm a very passionate person, and everything I do, I put feelings into.”

You had to respect that. Even when a subsequent interview saw him pull his glasses off and glare at me after I asked him if he was getting passed over for a shot at then-light heavyweight champion Tito Ortiz, Randleman would then follow up with a thoughtful answer, a firm handshake and some more back-and-forth banter.

There would be other battles, but he always respected that, as reporters, we had a job to do, and he always made sure we got what we needed, even if we had to verbally spar with him for a bit to get it. That meant every Randleman story was a memorable one, but as far as I’m concerned, the best one was never written.

Randleman was at the tail end of his career when he traveled to Europe for a UFC event a few years back. “The Monster” walked into the hotel bar and I introduced myself, as only one of our previous chats was in person, and that was before his bout with Liddell in 2001. He took a moment to let the name register, and within a split second, I was in a rear naked choke. Thankfully, he didn’t squeeze, and just as fast, that choke turned into a handshake, a hug and that ear-to-ear smile. It was the last time we spoke, which was unfortunate, but what a lasting memory to have.