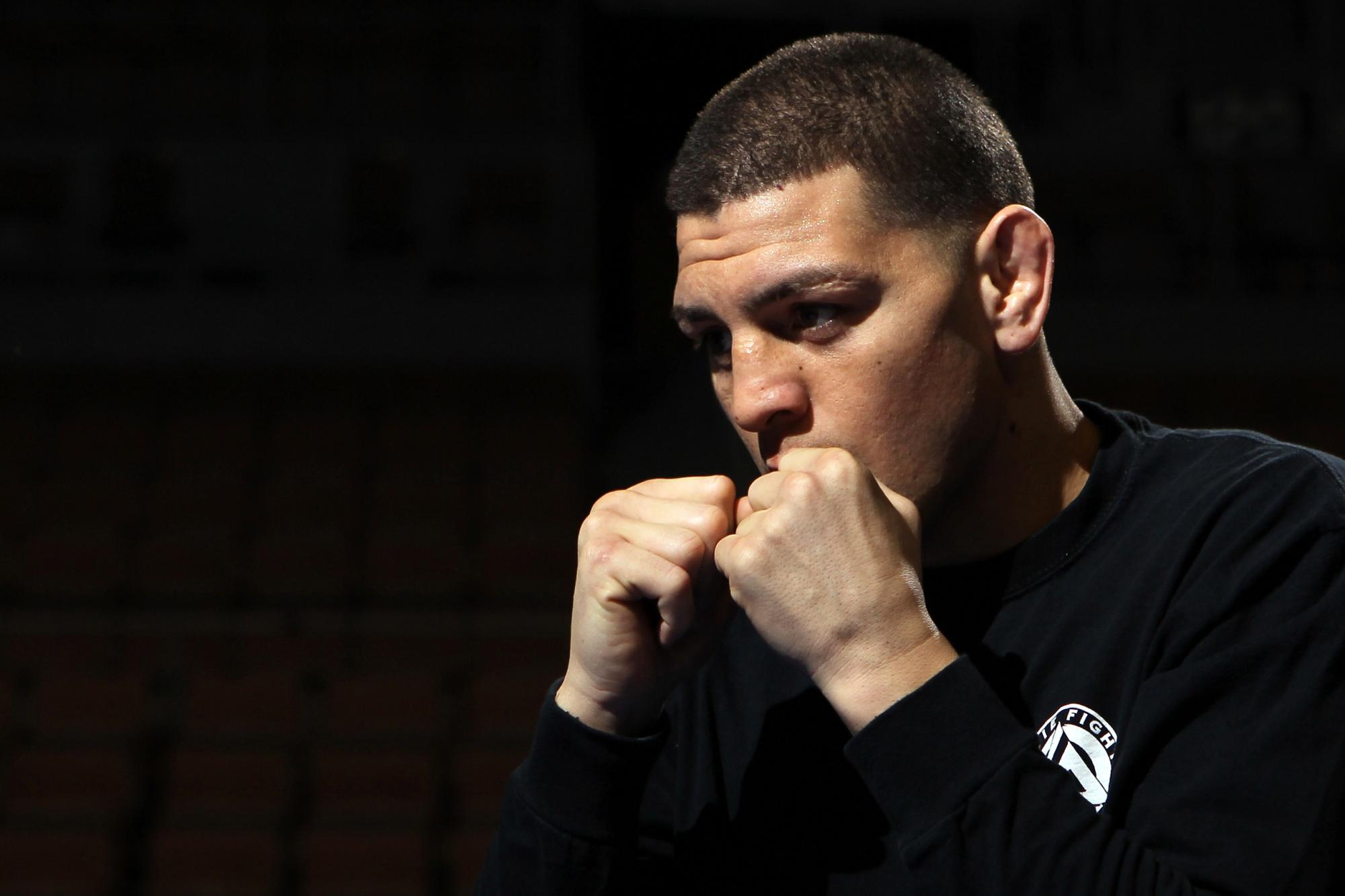 Flashback to November 5, 2005, when Nick Diaz squared off with Diego Sanchez at The Ultimate Fighter 2 Finale
By Thomas Gerbasi, on Twitter: @TGerbasi • Apr. 20, 2020

One of my first stories for UFC.com, maybe even my first, was with a young man who needed no introduction to the masses. That didn’t make the interview with Nick Diaz any less compelling. In fact, any time you got to speak to Stockton’s finest, it was a memorable experience.

As for this occasion, Diaz was on a hot streak in 2005, having already defeated Drew Fickett and Koji Oishi. Next up was a main event meeting against one of the hottest prospects in the sport, Ultimate Fighter winner Diego Sanchez. Needless to say, with two of the most intense individuals in the sport meeting up, there was more than a hint of bad blood, as you will see in the story below.

Diego Sanchez.  For Nick Diaz, that name encapsulates everything that he’s up against every time he steps into the Octagon.  There are no reality TV appearances for the 22-year-old from Stockton, California, no magazine covers or six figure contracts – not yet at least.  For him, fighting is not a sport; it’s his only option in life. So, when he says, “I don’t have anything else that I put any effort into,” he means it.

That makes him a very dangerous young man.

Luckily for him, on November 5th, in the main event of the Ultimate Fighter Finale on Spike TV, Diaz gets his shot at Sanchez. It’s the opportunity of a lifetime, to perform before a national television audience and to make a statement to the world with each punch, kick, or takedown.

Yet he didn’t really see it that way; at least not when the fight was first brought to his attention.

“They tell me to fight, so I fight,” said Diaz, when asked for his thoughts on the bout with the ‘Nightmare.’ “But I was like ‘man, this really sucks because it’s all good for him and all bad for me.’”

What he means is, if he beats Diego Sanchez this Saturday, he’s beaten a fighter many mixed martial arts fans will say was rushed into the spotlight too soon.  He loses, and he lost to a fighter who only made a splash on the national scene earlier this year, and then he goes to the bottom of the list of welterweight title contenders.  At the end of the day, the goal for Diaz is to wear a championship belt.  He doesn’t think beating Sanchez gets him any closer to that goal.

“The thing about this fight is people come up to me and say, ‘Yeah, you’re gonna get really good exposure for this one,’ and this and that, but I’m looking to climb up the rankings and fight for a title,” he said.  “I don’t think this is helping me do that really.”

But at the very least, fighting Sanchez does motivate him, doesn’t it?

“It really does,” he admits.  “I don’t like Diego Sanchez either and I don’t want to lose to that guy. I knew I’d probably end up fighting him sooner or later, but I figured it would be later on in my career or after he fought some more people and was ranked above me.”

At this moment in the sport’s development though, when it comes down to it, a fight is a fight, and a payday is a payday, and UFC shots aren’t coming by every month. Add national television exposure to the mix, and it’s a Corelone-style offer no fighter can refuse.  Diaz accepts that, and he’s coming to fight.  As for his opponent, he believes Sanchez’ glossy record was built with a lot of smoke and mirrors.

“He has like a Matt Hughes-type of style but he’s not Matt Hughes,” said Diaz of Sanchez.  “That’s all there is to it with him.  He’s a good jiu-jitsu guy who’s beaten a lot of good people in jiu-jitsu, and I think that’s the best thing about him – his jiu-jitsu game.  I’ve looked at a lot of the stuff that he’s done and I’ve seen some of the people he’s beaten, and it was pretty impressive.  He was on the show, and basically, he’s got a huge background.  He’s got almost 20 wins and he’s beaten some good people at jiu-jitsu, but he’s fought at a heavier weight class – which means slower and dumber guys – or fought guys with no record that were easy to beat, or guys with a lot of tattoos and their hair dyed.  He’s beaten a lot of those type of guys and it just built his record up.  The thing is, I don’t think he’s fought anybody really that great in fighting.  They put him on that show with all these other guys that sucked – they were terrible.  (Josh) Koscheck was the best guy and that was just because he was the best wrestler.”

How do you really feel, Nick?

But even though Diaz pulls no punches when talking about his peers at 170 pounds, his fire comes from a place few of us would want to see.  He’s someone that when he fills out his tax forms every year, he may just cross out ‘professional athlete’ next to profession and insert the word “fighter.”  Now that’s what everyone in this sport does – they fight – but few live it like Diaz, who while growing up in California had little in the way of luxuries or even positive reinforcement from coaches or family on a daily basis.  In other words, he came up hard, and when he says this is his only option – he means it.  To him, that’s the difference between being an athlete and being a fighter.

“My best way to say it is that most good athletes are just that – good athletes,” he explains.  “They were brought up being athletes; they had somebody pushing them, encouraging them, taking them to practice – whether they were playing football, doing swimming, boxing or wrestling.  That takes a lot of money and positive encouragement.  That’s stuff people like me don’t get.  It doesn’t work like that.”

“All the athleticism that I have, it’s because of me,” Diaz continues.  “I didn’t even have a dad around.  I didn’t have a dad to put me in some wrestling camp, and I didn’t have aunts and uncles coming around to help me out.  My mom, she’s been working at Lyon’s restaurant in Lodi for like 25 years.  She took me to swimming practice when I was younger. For some reason she stuck me in swimming, and I’d be trying to run off and cut practice, and she’d drag me back to practice just so I did something.”

Admitting that he “was always screwing up” in school, Diaz nonetheless stuck with swimming for a while, enough that when he started fighting shortly after his 18th birthday, he had developed an edge on his opponents.

“From swimming I got good cardio, good wind – just enough so that when I got into fighting I had a little head start on people; I was in better shape,” he said.

Not that it was all roses.

“It wasn’t so easy, especially starting out,” Diaz admits.  “I fought all hard guys and I didn’t have ten people coaching, training, and feeding me.  I had to start out learning how to eat right, all by myself with nobody telling me how or by reading any books.  I learned just by training so hard and feeling like garbage when you do the wrong thing.”

Debuting in 2001 with a submission victory over Mike Wick in an IFC show, the Cesar Gracie Team standout quickly built up a reputation not only for his jiu-jitsu, but for his willingness to scrap.  An 11-3 MMA record has been the result so far, with wins over Robbie Lawler, Drew Fickett and Chris Lytle overshadowing three close (and sometimes controversial) defeats to Jeremy Jackson (later avenged twice), Kuniyoshi Hironaka, and in August of 2004 to Karo Parisyan.

“I hate it that I have three losses on my record,” said Diaz.  “One I was robbed in Japan (Hironaka).  The other one I came back and beat the guy twice (Jackson).  (In the Jackson fight) I didn’t know anything about him and I had already fought two people that night before I fought that guy.  So that’s two losses right there, and the Karo Parisyan fight, I beat him up and I still lost the fight.  Come on.”

That’s a fighter talking.  Sure it’s great for etiquette and sportsmanship to just walk away from a defeat by shaking your opponent’s hand and saying he was the better man that night, but to some, admitting defeat is the first step to accepting it.  Nick Diaz won’t accept defeat – ever – and he brings that mantra with him into the Octagon.

“I just think in my head that the guy that I’m fighting had it easy,” he said.  “They haven’t been where I’ve been and they’re not as crazy as I am and that’s the way it is.  You’re just not.  I know you’re not.  I know it.  That’s the way I think.  I know you’re not trying to get up out of this hell hole.  You’re just trying to be the best that you can be.    I’m gonna come out of my hell hole and I’m gonna beat you.”

Then he pauses, just for a moment, before speaking again.

“That’s the difference between me and a regular type of athlete.”

Needless to say, this is what Diego Sanchez will be dealing with this Saturday night.

“This is me and this is what I do,” said Diaz.  “I don’t have any fallback plans like the rest of these people.  If Diego Sanchez starts doing real bad at this, and he goes ahead and quits, he’s gonna have something else he’s doing.  He’ll go back to school or do something.  Let me tell you, I ain’t going back to school.”

This one got heated before the bell even rang, with the two having to be separated in the staging area as they waited to walk to the Octagon. And once the fight commenced, the hostilities continued for 15 minutes, with Sanchez leaving with a unanimous decision win that wasn’t nearly as one-sided as the 30-27 scores would indicate. This was high level MMA and neither fighter would have to hang his head after such a bout, though that was no consolation to Diaz.