Before the pay-per-view main events and status as one of MMA’s true superstars, Nate Diaz was just another prospect trying to make his way up the ladder in the UFC. But if we’re being truthful, Diaz was never like the other prospects. There was always something unique about the Stockton native, something that made you tune in whenever he fought. Back in 2008, Diaz was an Ultimate Fighter winner and on a four-fight winning streak in the UFC. Next up was a highly-anticipated matchup with Josh Neer, who had lost to Diaz’ older brother Nick two years earlier. And while it’s been nearly 12 years since Nate’s fight with “The Dentist,” the interview below shows that his fighting spirit has never changed.

At just 23 years old, Nate Diaz has a lot of time left to do great things in the sport of mixed martial arts.  But a hundred years from now, no matter what the rising lightweight star accomplishes, if you want a glimpse at who he is as a fighter, you may want to put his April 2nd bout with Kurt Pellegrino into the time capsule.

The winner of The Ultimate Fighter’s fifth season, Diaz had sailed through his first two post-reality show opponents, submitting both Junior Assuncao and Alvin Robinson in the first round.  Then came the bout against Pellegrino, and for the first five minutes of the bout, Diaz was battered and bloodied by the veteran, who dominated the opening round.

At the bell, Diaz walked back to his corner and sat down, but he wouldn’t be listening to his brother, UFC vet Nick Diaz, or trainer Cesar Gracie.  Instead, Diaz replayed the first round in his head and knew what everyone was thinking. 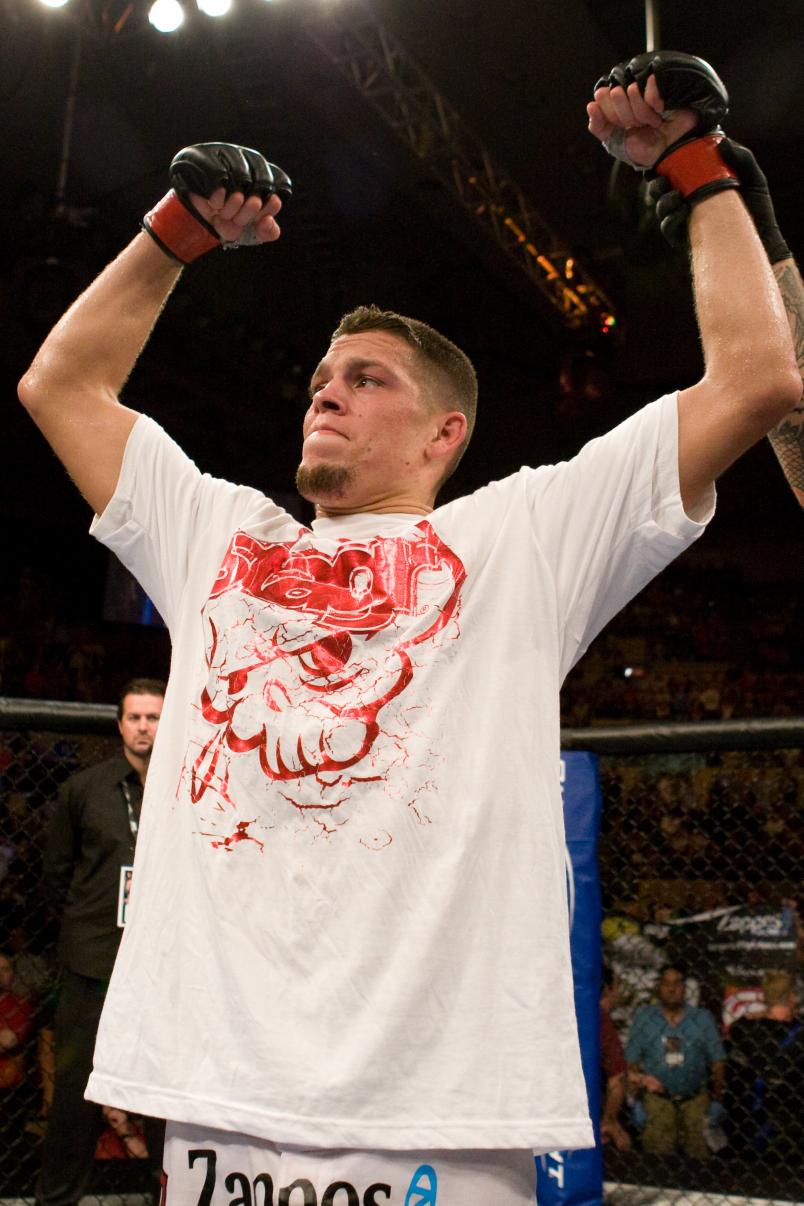 There was also a little bit of gamesmanship going on, as Diaz looked to get inside his opponent’s head to let him know that he may have lost a battle, but not the war.

“I was looking over at him (Pellegrino), trying to give him dirty looks,” said Diaz.  “I was more enthusiastic about going out for the second round, and I liked the idea that everybody thought I was done for. It kinda motivated me.”

As Diaz and Pellegrino rose for round two, Diaz was animated, throwing his hands in the air, ready for battle.  The bell rang, and though the early stages of the second stanza again were in Pellegrino’s favor, Diaz was starting to get closer with his submission attempts.  Then suddenly, after another Pellegrino takedown attempt, Diaz sunk in a triangle choke.  He immediately pumped his fists and waited for Pellegrino to tap.  Seconds later, he did, and Diaz had not only survived a gut check, but he ended the fight in spectacular fashion.

The kid from Stockton had arrived, and in the process he sent a message to the lightweight division that if you want to beat him, you have to literally take him out.

“That’s kinda how I feel lately,” he said.  “If they’re not technically better than me, they better be ready for a war then.  I’m not going to stop until I’m stopped – I better be unconscious because I’m just gonna keep going.”

It’s an attitude that comes with being a tough kid in a tough town – Stockton, California.  And growing up in the 209 area code is something that Diaz is proud of.

“Stockton’s where I live, where I come from,” he said. “All my family and friends are here, and I just put it out there because I remember where I came from.  We’ve got fans from everywhere, but I just try to rep my city the best I can and let everybody know where I’m from.” 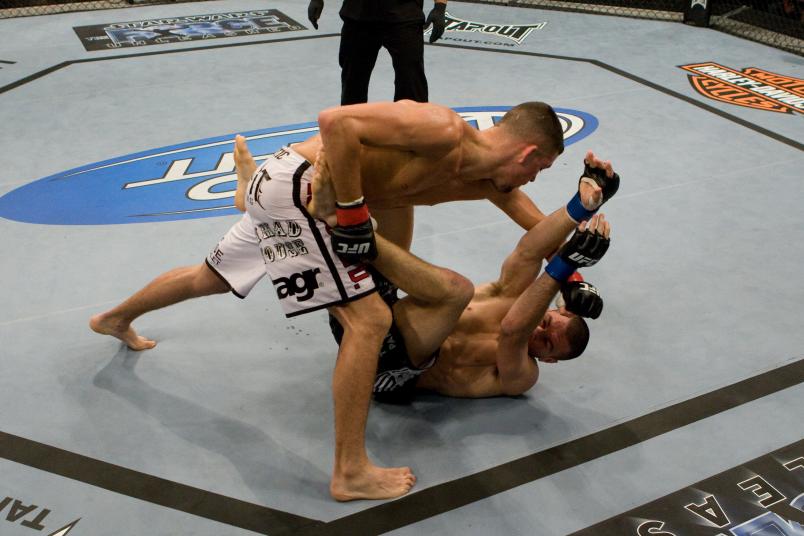 Yet while Diaz’ toughness may have been born in Stockton, it was honed in the gym, where at 16 he was not only working with his brother Nick, but with world-class fighters who were making a lot of noise in the UFC.  And when you’re working with the GracieFighter team, there are no shortcuts.

“Before I fought, I had a lot of experience training,” recalls Diaz.  “I trained with my brother, Gil Castillo, and Dave Terrell, and a bunch of guys who had already been experienced fighters.  I was smaller than all of them, and I was just a kid training. I was 16 years old and they were already fighting in the UFC.”

Seven years later, that experience paid off in the Pellegrino fight, when he was forced to dig deep to come up with a win.

“You’ve just got to keep going and keep going hard,” he said.  “Even if someone is winning, I figure a lot of times they’re giving it all they’ve got right there and it’s gonna be hard for them to keep it up for three rounds because I know I ain’t giving up.”

It was a huge win for Diaz, now 9-2 as a pro, but there’s no rest for him yet, as he will now face Josh ‘The Dentist’ Neer in Wednesday’s UFC Fight Night main event (Spike TV 8pm ET/PT) in Omaha, Nebraska.

“He’s the toughest guy I’ve had to fight so far,” said Diaz.  “I think he’s underrated – I watched his fights and I think he’s better than most of the guys in the division, so it’s gonna be a tough fight.”

And a great one for the fans, especially considering that in a sport where plenty of guys say that if necessary they would fight for free, Diaz and Neer probably would.  They’re throwbacks in a sense that they’re not in the Octagon for any reason other than to simply fight.  Diaz agrees with that description.

“He’s different than most of the guys I fought,” said Diaz of Neer.  “He’s known for being the tough guy, and being down to fight, compared to the last few guys I fought, who were known for being more technical.  He came from a rougher point because he just goes out there and fights, and he was winning fights from being tough. He was gaining experience and learning how to be technical off of that experience.  So this is gonna be one helluva fight and a difficult one, to be honest.”

Yet despite the respect the two have shown for each other in the leadup to this fight, Diaz – whose brother Nick decisioned Neer in 2006 – is confident and ready for war.

“I’m just gonna go in there and fight, go as hard as I can, work harder than he does, and hopefully he slips up and hopefully I don’t get caught with a hot one and I don’t slip up,” he said.

And with a win, Diaz will have made another leap in his four year career - from reality show star to prospect to contender to possibly someone in the title mix.  Not a bad run for someone who has just a little over a year in the UFC.

“I’m just climbing the ladder, and whatever they want to do next, just keep ‘em coming,” said Diaz.  “I have to get through this one first, but if I win, it should be good and I want to know who’s next. I’m ready, let’s do it.