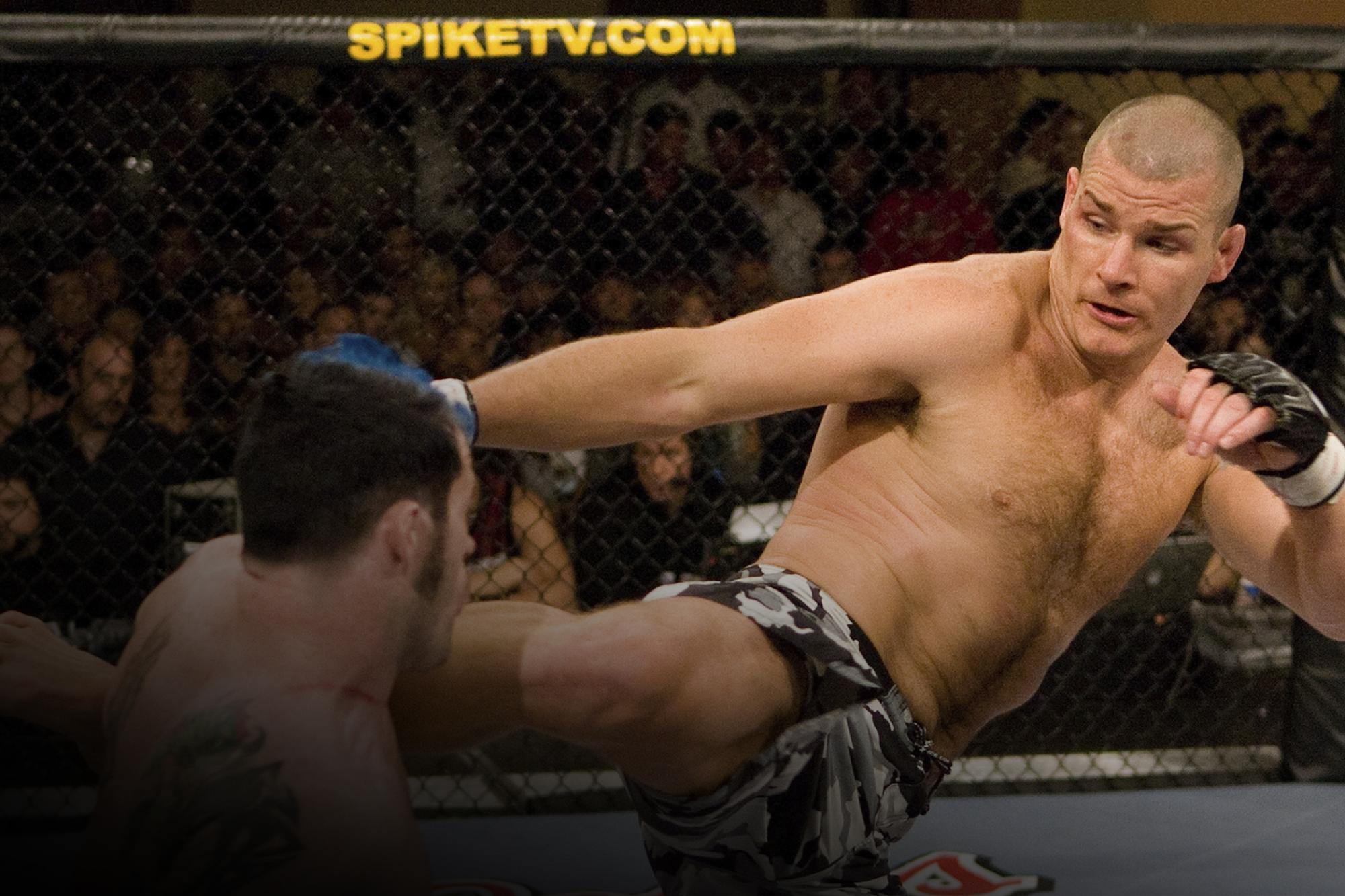 Flashback to 2006, when Michael Bisping earned the first of many UFC victories at The Ultimate Fighter 3 Finale.
By Thomas Gerbasi, on Twitter: @TGerbasi • Apr. 28, 2020

The year was 2006, and Michael Bisping wasn’t thinking about world championships and Hall of Fame inductions as he prepared to face Josh Haynes in the final of The Ultimate Fighter 3. Instead, Bisping was just happy to have an opportunity to get a steady paycheck and provide for his family as a UFC fighter. Nearly fourteen years later, “The Count” is a UFC Hall of Famer and a former middleweight champion. But today, we flash back to 2006…

At this stage of the sport’s development, mixed martial arts hasn’t been too kind to British fighters who have competed in the UFC.  From the brief flashes of brilliance shown by Mark Weir and Ian Freeman to fighters like Lee Murray and Leigh Remedios, who only lasted for one fight each in the Octagon, it’s been an uphill climb to respectability for those who wave the Union Jack.

Michael Bisping hopes to change all that.

A native of Cyprus who now makes his home in Liverpool, Bisping is one win away from a UFC contract that will see him not only make an impact here in the States, but that will probably make him the poster boy for the UFC’s expected foray into Europe in 2007.  And that’s not to mention the fact that a nation of MMA fans back home will be watching his every move when he battles Josh Haynes in The Ultimate Fighter finale on Saturday at the Hard Rock Hotel in Las Vegas.

“I suppose it is quite a lot of pressure because people have always been quick to write the English off and say, ‘Ah, they don’t know what they’re doing over there and they’re not too good,’” admits Bisping.  “So I hope to fly the flag well and change people’s opinions on that.  So far I’m doing a good job, but it’s still early.  I do take that responsibility seriously though and I definitely want to do the UK proud.”

He’s done a fine job so far, walking through Kristian Rothaermel and fellow Brit Ross Pointon en route to the TUF 3 finals, and while he’s the favorite entering his bout with the hard-hitting Haynes, “The Count” isn’t taking his foe lightly.

“Josh likes to stand up and likes to trade, and his biggest strength is his heart,” said Bisping.  “But his standup isn’t the greatest and he swings quite wildly.  He’s tough and resilient, but every time I rolled with him on the ground, I tapped him out; and his wrestling was about the same level as mine.  I’m confident, but I’m not underestimating him at all and I know he’s gonna bring it to the table, so I’m expecting a good fight.”

It’s been a whirlwind 2006 so far for the 27-year-old, who brought a 10-0 record and a decent reputation with him to the US earlier this year to spend six weeks cooped up with 15 other fighters chasing the same prize as he was.  And along with Pointon, Bisping also had to deal with the adjustment to a new culture; something he admits wasn’t too difficult.

“There were little things here and there, but it wasn’t a huge culture shock,” he said.  “In the house there were certain slang words and dialects that people struggled with, but on the whole, everyone was pretty cool.  Sometimes the sense of humor – people use a lot of sarcasm in England – they wouldn’t understand it in America, and they kinda look at you a bit funny and wonder what the hell are you talking about. (Laughs) But there wasn’t a huge culture shock – it was just like England, but with better weather and no rain.”

And once he made it to the finals, the skies got even brighter.

“It’s a dream come true,” he said.  “It’s the top organization in the world, and here it is, three years after I started, and I’m here.  This (the finale) is just a steppingstone into the UFC and hopefully I can go on and have a decent career here.  I still can’t believe it, to be honest – it’s almost surreal.”

Coming from where he did, that’s no surprise.  A smart kid who did well in school, Bisping – who started taking martial arts when he was eight years old – nonetheless reached the age where adulthood was upon him and a life’s vocation still had not presented itself. 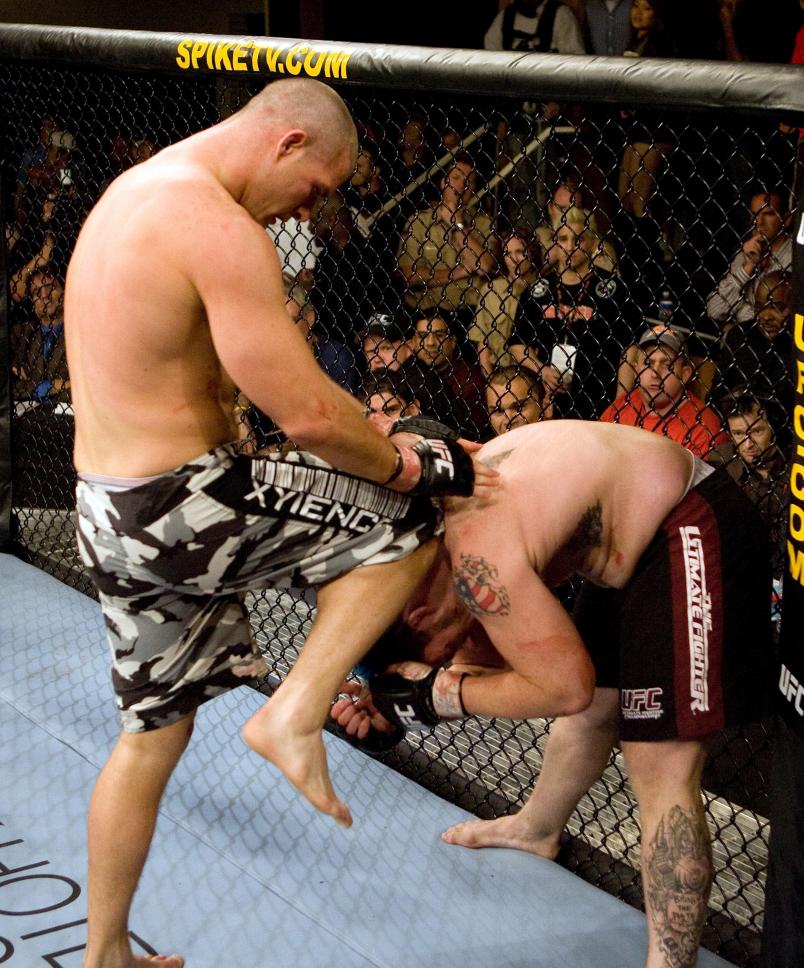 “Career wise, nothing ever grabbed me, so I went to college and I ended up doing a course for advanced electrical engineering,” he explains.  “It just bored me to tears.  I did it for three months and just left because I was falling asleep in the classes.”

Bisping then hit the pavement and worked everywhere and anywhere he could to make ends meet.

“You name it, I’ve done it,” he said. “But they were all the crappy jobs though, nothing too flamboyant.  I was a slaughterman, builder, and laborer.”

Soon, two children would arrive, and Bisping was at a crossroads.

Then, as he describes it, “I was thrown a lifeline.”

In 2003, Bisping, who had always stayed in the gym and trained in jiu-jitsu and kickboxing, decided that he was going to make a run at a mixed martial arts career.  He knew he had the talent; now he just had to put it to the test.  He quit his most recent job as an upholsterer and became a full-time pro fighter.

“I had never been happy in anything I did,” said Bisping. “So when I started training full-time for mixed martial arts in the summer of 2003, it was the best thing I’ve ever done in my life.”

And he got the blessing of his girlfriend and family to take that shot at glory.

“My girlfriend couldn’t be any more supportive than she has been,” he said.  “She knew I wasn’t happy in the jobs I was in and she always wanted better for me and always knew that I was capable of much more.  So when I took this move, she was right behind me and was confident that I could do well.  And ultimately, she knows that I’m doing this for myself and for my family.”

But being a pro fighter in the UK isn’t an instant ticket to riches – far from it.  And that’s not to mention the funny looks and comments you get from people when you tell them what you do for a living.

“You tell them what you do and they look at you a bit strange or think you’re a thug,” he said.  “They have no idea of the technical aspects involved.  But I bore people to death at great lengths to educate them.”

And slowly but surely, MMA is starting to take hold in Great Britain.

“MMA is getting really big in England now,” he said.  “It’s on TV quite a lot, and people know what it is. That said, it’s nowhere near the scale of what it is over here.  I always knew the UFC was big, but I had never been to one live.  I went to UFC 59 in Anaheim and I was just completely blown away.  I could not believe it.  And the recognition you get over here is a lot better – I think you get respected as an athlete by more people than you do in England.”

That could change with a victory on Saturday, especially if UK fans can see one of their own win a big, nationally televised fight in the UFC.  It’s happened before, with the aforementioned Freeman, Weir, and Murray winning big bouts, but those fighters were never in America’s living rooms on a weekly basis. Bisping is, and that’s exposure you couldn’t buy with all the big wins in the world.  And though he’s remaining humble, he is willing to accept the responsibility of exposing mainstream fans in the UK to MMA.

“If that was the plan and that was to happen, I’d welcome it with open arms,” said Bisping.  “I’d be honored and flattered for that to happen.”

At heart though, Michael Bisping isn’t about fame and adulation and carrying a nation on his back.  He’s about taking care of his family, putting in an honest day’s work in the Octagon, and winning.  No matter where you come from, that’s an attitude worth admiring.

“I never had anything handed to me, and everything that I’ve had, I had to work for,” said Bisping.  “My mum and dad never had much money and I had a humble upbringing.  I’ve done the crappy jobs, I worked 12-hour days in the middle of the winter, getting up when it’s pitch dark and going home when it’s pitch black.  Now I’ve left that all behind for the moment, and fingers crossed I won’t go back to it.  That definitely gives me a little extra drive.  I’ve moved on from that and I don’t want to go back.  It keeps my feet on the ground, keeps me working hard, and keeps me training and focused.”